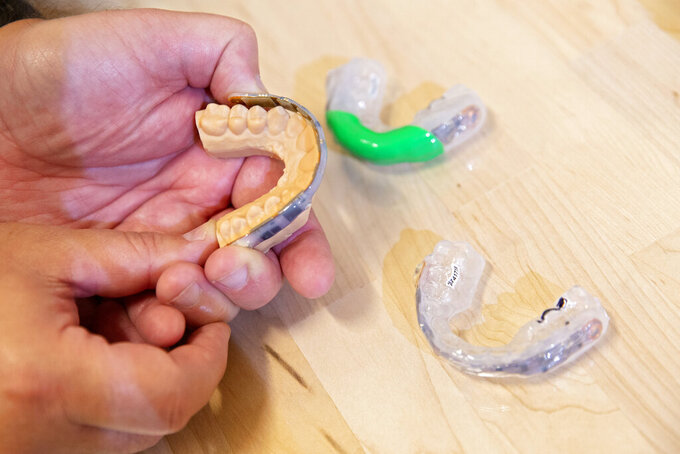 Ryan M. Kelly, ASSOCIATED PRESS
Mouthguards are displayed in Charlottesville, Va., Aug. 17, 2021. The mouthguards that some college football players are wearing this season have a dual purpose. Not only does the equipment provide the obvious protection for teeth and jaws, it also includes sensors collecting data to help research the best way to prevent serious head injuries. Ten NFL teams already had been using these sensors for the last few years. (Ryan M. Kelly/AP Images for NFL)

MADISON, Wis. (AP) — The mouthguards that some college football players are wearing this season have a dual purpose.

Not only does the equipment provide the obvious protection for teeth and jaws, it also includes sensors collecting data to help research the best way to prevent serious head injuries.

Ten NFL teams already had been using these sensors for the last few years. This season, college players at Alabama, North Carolina, Washington and Wisconsin also have utilized these custom-made mouthguards.

While helmet sensors already had been used for many years to study the impact of blows to the head, experts believe the mouthguard sensors add a new perspective.

“We wanted to get inside the helmet and closer to the target of interest,” NFL chief medical officer Allen Sills said. “That’s where the mouthguard seemed to be a natural choice because it’s closest to the brain and allows us to see what the body is actually feeling.”

Jennifer Langton, the NFL’s senior vice president of health and safety innovation, said the league was seeking to partner with research schools with strong football programs. Players from each school could volunteer to use the mouthguards that included the sensors.

Officials at the respective schools said about 35 players were using the mouthguard sensors at Washington and 20 at Alabama. Jason Mihalik, a professor in North Carolina’s department of exercise and sport science, said about 40 of the Tar Heels have used the sensors and that 30 are actively wearing them at any given time.

“We really wanted to start with a manageable number that we could effectively do, and then continue to grow if we’re getting valuable data and there’s still an interest in continuing,” said Lizzie Elder, a program director and associate professor for Alabama’s athletic training program.

Wisconsin didn’t disclose how many players were using the mouthguard sensors. Daniel Cobian, a professor of orthopedics and rehabilitation for Wisconsin’s school of medicine and public health, said the sensors went to linemen and tight ends. Cobian said he believes those positions were the focus at the other schools as well.

“We know that linemen sustain not just the potential magnitude but a high volume of head impacts because they play in close contact with other players,” Cobian said.

School and league officials credited the designers of the sensors for finding a way to produce the technology on such a small piece of equipment without making it significantly larger or more cumbersome. They say that the mouthguards with the sensors don’t look much different from those without them.

“It’s not like it’s a bigger mouthguard, or it’s bulkier or more uncomfortable,” Mihalik said. “They’re pretty much the same form.”

Wisconsin nose tackle Keeanu Benton says he started wearing the mouthguards with sensors because he wanted to help provide feedback for the researchers. Benton said the mouthguards initially seemed a little big to him but that he quickly adapted.

The mouthguards with the sensors are so similar to a typical mouthguard that school officials occasionally have to remind players to be careful with them.

“We’ve noticed players are pretty hard on their mouthguards,” said Kimberly Harmon, a professor of family medicine and orthopedics and sports medicine at Washington’s school of medicine. “They stick them in helmets. They chew on them. They don’t really mind wearing the mouthguards at all, but we had to educate them a little bit on being nice to their mouthguards.”

The sensors collect kinematic data, including impact speed, direction, force, location and severity. NFL officials hope that data can help them figure out how to increase player safety.

Sills noted that a previous study had engineers looking at every concussion that took place in NFL action over a period of several years. When they noticed concussions repeatedly occurred after players lowered their head to initiate contact, it led to the rule changes penalizing that action.

Langton said the NFL is considering expanding this study to other universities.

“You’re increasing the number of observation points,” Langton said. “It allows you to make more powerful observations and answer questions quicker than we could if we were using NFL data alone.”