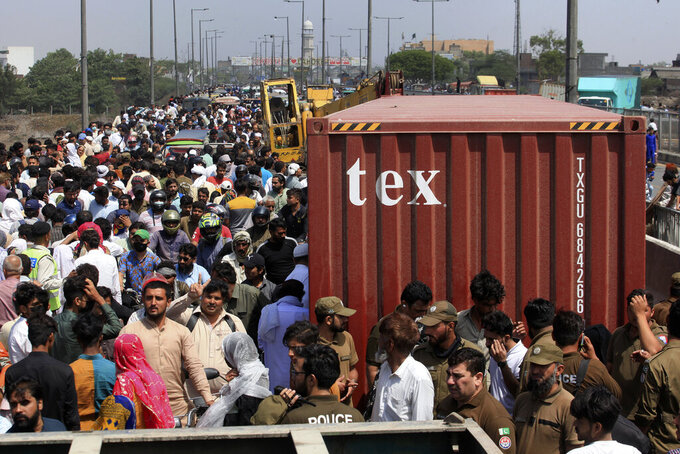 K.M. Chaudary, ASSOCIATED PRESS
People cross a bridge on Ravi River which is closed for traffic due to shipping containers placed by authorities in an attempt to foil a planned protest of Pakistan's main opposition party, in Lahore, Pakistan, Tuesday, May 24, 2022. Pakistan's key opposition party led by recently ousted Prime Minister Imran Khan accused police of detaining hundreds of its supporters in raids that started early Tuesday. (AP Photo/K.M. Chaudary)

ISLAMABAD (AP) — Pakistan on Tuesday banned ousted Prime Minister Imran Khan from holding a massive, planned rally in the capital of Islamabad and cracked down on his supporters in overnight raids across the country, arresting hundreds.

The ban came hours after a policeman was killed during one of the raids, when a supporter of the former premier opened fire after officers entered his home in the city of Lahore.

Interior Minister Rana Sanaullah warned Khan that he would “not be allowed to disrupt peace in Islamabad" and would be arrested if needed, should the rally go ahead. Sanaullah earlier in the day accused Khan of seeking to create a civil war-like situation.

The former cricket star turned Islamist politician, Khan served as prime minister for over three and half years until he was ousted by a no-confidence vote in parliament in April.

Khan has remained defiant, demanding early elections and claiming his removal was the result of a U.S.-organized plot in collusion with his successor, Pakistan's new Prime Minister Shahbaz Sharif. Washington denies any role in Pakistan’s internal politics.

Earlier this week, Khan urged supporters to converge on Islamabad on Wednesday for a massive rally to pressure Sharif's government. The demonstration, he said, would continue until a date for snap elections was announced.

Sanaullah, the interior minister, said the decision to ban the rally was taken after Khan’s Tehreek-e-Insaf party failed to assure the administration in writing that the rally would be peaceful.

Earlier Tuesday, authorities stepped up security in Islamabad, deploying additional officers and paramilitary Rangers. Large shipping containers were placed on a key road leading to the parliament building, to prevent Khan’s supporters from getting close and possibly staging a sit-in there.

According to Fawad Chaudhry, a spokesman for the Tehreek-e-Insaf party, police raids against their supporters started shortly after midnight Monday. Homes were still being raided on Tuesday morning and at least 400 supporters of the party were arrested across the country, Chaudhry said. Khan condemned the arrests on Twitter.

Authorities confirmed the raids but refused to share details about any arrests.

At a news conference in the northwestern city of Peshawar on Tuesday, Khan vowed to carry on with the rally in the Pakistani capital as planned.

“I tell my supporters to reach Islamabad and I will also be there," he said, insisting he was not afraid of death and urging his followers to “get ready for sacrifices" for the sake of Pakistan's sovereignty.

Several other prominent figures from Khan's party warned police they could face violent resistance if raids on their homes continued.