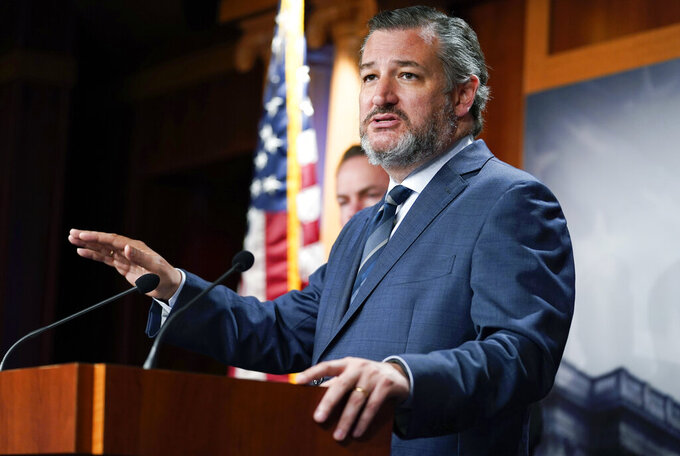 Mariam Zuhaib, ASSOCIATED PRESS
FILE - U.S. Sen. Ted Cruz, R-Texas, speaks during a news conference on April 7, 2022, in Washington. Arizona Democratic Congressman Ruben Gallego lashed out at Texas Republican Sen. Cruz in a series of profane tweets in response to the massacre at a Texas elementary school. Gallego responded Tuesday, May 24, 2022, to Cruz's comments predicting that Democrats and the media would try to politicize the shooting. (AP Photo/Mariam Zuhaib, File)

PHOENIX (AP) — Arizona Democratic U.S. Rep. Ruben Gallego lashed out at the National Rifle Association and Texas Republican Sen. Ted Cruz in a series of profane tweets in response to a massacre at a Texas elementary school.

Gallego responded Tuesday to Cruz's comments predicting that Democrats and the media would try to politicize the shooting.

“F—- you @tedcruz you care about a fetus but you will let our children get slaughtered,” Gallego wrote. “Just get your ass to Cancun. You are useless.”

Cruz opposes abortion and was roundly mocked last year when he went to Cancun during widespread power outages that left many Texans without heat in frigid temperatures.

Gallego followed that tweet a few minutes later with another: “Just to be clear f—- you @tedcruz you f—- baby killer.”

Gallego was reacting to comments Cruz made to a CNN journalist.

“Inevitably when there’s a murderer of this kind, you see politicians try to politicize it, you see Democrats and a lot of folks in the media whose immediate solution is to try to restrict the constitutional rights of law abiding citizens,” Cruz said.

The Texas senator later tweeted that he and his wife “are lifting up in prayer the entire Uvalde community."

An email sent to Cruz's media office seeking comment on Gallego's tweets was not immediately returned.

Gallego also targeted his ire at the nation's largest gun lobby, writing “F—- you @NRA," and at California Republican Rep. Darrell Issa, who offered thoughts and prayers to the victims.

“F—- your prayers,” Gallego wrote. “They haven’t worked for the last 20 mass shootings how about passing laws that will stop these killings.”

Gallego, a former Marine and Iraq war veteran, has a history of using profanity on Twitter, especially during times of national crisis. He has directed variations of the F—- you phrase at Russian President Vladimir Putin, Arizona Republican Party Chair Kelli Ward and former Fox News host Geraldo Rivera.