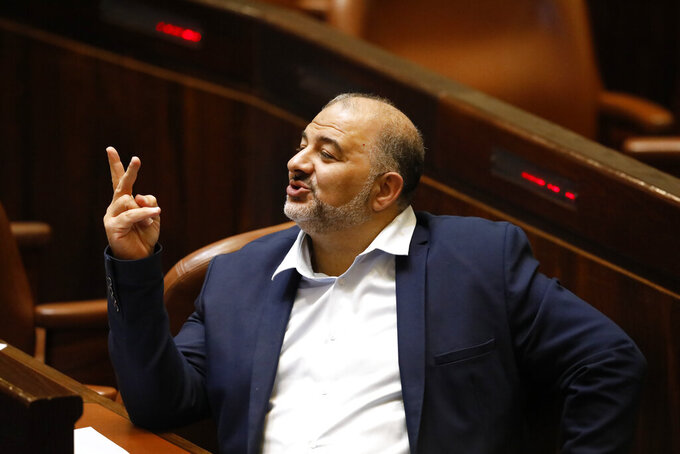 JERUSALEM (AP) — A key Israeli governing partner said Wednesday it was remaining in the country's fragile coalition, averting another crisis for the embattled government.

Mansour Abbas, the head of the Islamist Arab Ra'am party, said he would continue his party's membership in the coalition after suspending it following tensions at a key Jerusalem holy site in recent weeks.

“Ra'am decided to give an additional opportunity to the coalition and the government in order to move the wheels of decisions and implement them in a practical manner,” he told reporters in parliament, flanked by his three party members and speaking in Arabic.

Ra'am is one of eight parties that make up the country's ideologically disparate coalition, which runs the gamut from dovish factions to nationalist ones. Ra'am made history last year when it became the first party representing Arab citizens of Israel to join a coalition.

The parties were brought together over their opposition to former leader Benjamin Netanyahu and they have little else in common. While they agreed to put aside divisive issues such as Palestinian statehood to keep the coalition stable, the parties have frequently butted heads over their differences.

Weeks of Israeli-Palestinian violence, much of it fueled by tensions and fighting at Jerusalem’s most sensitive holy site, prompted Abbas to suspend cooperation.

The government could have continued on through minority rule without Ra'am's four seats if the party had bolted. But it would have struggled to pass legislation and needed to look for support from opposition lawmakers. It also would have fractured the coalition and opened the door for other disgruntled parties to leave.

Parliament reopened this week for its summer session as Prime Minister Naftali Bennett was fighting to keep his government afloat and his own party from crumbling.

Since he took office, Bennett's nationalist Yamina party has lost two members, most recently one last month, which left the coalition and opposition equally divided in the 120-seat parliament.