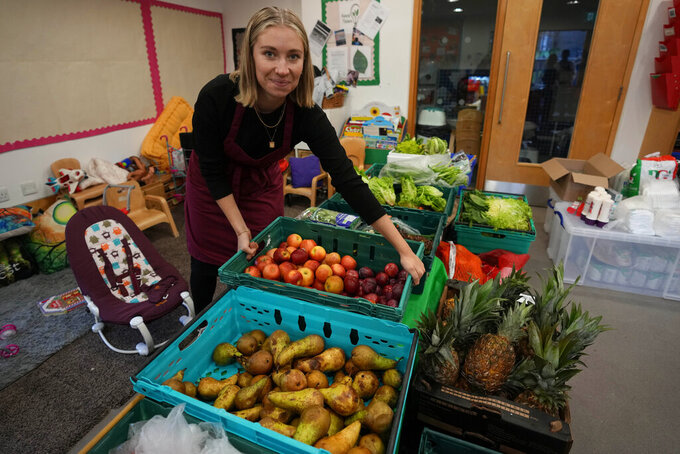 LONDON (AP) — Millions of people across Britain face higher taxes and energy bills after the government on Thursday announced an emergency budget focused on restoring the country’s financial credibility and bolstering an economy battered by soaring inflation.

Treasury chief Jeremy Hunt unveiled a 55 billion-pound ($65 billion) package of tax increases and spending cuts designed to demonstrate that Britain is committed to paying its bills after his predecessor spooked financial markets by proposing tax cuts without saying how they would be paid for.

Hunt sought to cushion the blow by pledging to protect the most vulnerable, announcing that he would increase welfare benefits and state pension payments in line with inflation and help low-income residents with their energy bills. The government will also maintain investment in energy and infrastructure projects to boost economic growth, he said.

Even so, the government's fiscal watchdog warned that Britons face a painful 7% fall in living standards over the next two years.

“The British people are tough, inventive and resourceful. We have risen to bigger challenges before,’’ Hunt told the House of Commons. “We aren’t immune to these headwinds, but with this plan for stability, growth and public services, we will face into the storm.’’

Hunt and Prime Minister Rishi Sunak, who took office less than a month ago, face the challenge of tackling inflation and a growing deficit while helping millions of people slammed by a cost-of-living crisis as Russia’s war in Ukraine pushes up food and energy prices.

That task was made more difficult by former Prime Minister Liz Truss, who in September announced 45 billion pounds ($53 billion) in unfunded tax cuts that sent the pound to a record low against the U.S. dollar, boosted government borrowing costs and forced the central bank to intervene to stabilize bond markets. Truss was forced to resign six weeks after taking office.

A biggest criticism was that Truss’ policies were introduced before being reviewed by the independent Office for Budget Responsibility, a mistake Hunt and Sunak took pains to avoid.

The agency said Hunt’s proposals would help slow inflation, boost economic growth and rein in government spending over the next five years.

Even so, soaring prices will cut real wages and living standards by 7% over the next two years, even as the government spends an additional 100 billion pounds on support programs, the OBR said in its analysis of the budget and the state of the economy.

“This type of contraction has never been recorded in Britain’s postwar history,” said Barret Kupelian, a senior economist at PwC.

Declining incomes, rising interest rates and a drop in home prices will tip the economy into a recession lasting more than a year from the third quarter of this year through the middle of 2023, the OBR predicted. A recession is an extended period of economic contraction, often defined as two consecutive quarters of shrinking output.

Britain doesn’t have an independent body that declares recessions like in the U.S. and Europe, which use other data like rising unemployment and job losses in their assessments.

The OBR said U.K. unemployment is likely to rise to 4.9% in the third quarter of next year from 3.5% now. Inflation, which reached a 41-year high of 11.1% in October, will fall sharply over next year, dropping below zero in the middle of the decade before returning to the Bank of England’s 2% target in 2027, it predicted.

The grim economic picture is weighing on government finances, reducing tax revenue, driving up welfare spending and increasing borrowing costs. As a result, the OBR estimates that government borrowing will jump by a third to 177 billion pounds, or 7.1% of economic output, in the current fiscal year.

Borrowing will begin dropping after that, declining to 2.4% of gross domestic product in the 2027-28 fiscal year. That means government debt will rise to a 63-year high of 98% of GDP over the next three years before it begins to decline, the OBR forecast.

In an effort to close the gap, Hunt said he would ask “more from those who have more” and lower the threshold for the highest tax bracket — 45% — by almost 25,000 pounds a year, costing high-earners about 1,200 pounds annually.

The government also will freeze the income levels at which taxpayers move into higher tax brackets, effectively raising taxes for hundreds of thousands of workers as inflation pushes up their wages.

“This, along with a double whammy of high inflation and higher taxes could mean a potential pay cut rather than a pay rise,” said Faye Church, a chartered financial planner at Investec Wealth & Investments.

The government also bowed to public pressure to increase taxes on the huge profits of energy producers. Hunt raised the windfall tax on oil and gas companies to 35% from 25% and extended it to March 2028. Electricity firms will have to pay a new temporary levy of 45%.

Hunt said the taxes would raise a combined 14 billion pounds next year.

He promised to protect public spending on key areas such as health and education as well as investment in energy and infrastructure projects. He delayed major spending cuts until 2025 — after the next general election — and deferred key decisions such as whether to stick to the previous government’s promise to increase defense spending to 3% of economic output.

Pensioners and people on welfare benefits will see their payments increase in line with inflation, while millions of workers on minimum wage will get a 9.7% increase in April, Hunt said.

Millions of households face higher energy bills, however, when a price cap rises from 2,500 pounds a year for the average household to 3,000 pounds in April.

Hunt said he would soften the blow by increasing support payments for low-income families and those with disabilities.

Rachel Reeves, economy spokeswoman for the opposition Labour Party, said the budget would leave Britain in a “doom loop where low growth leads to higher taxes, lower investments and squeezed wages, with the running down of public services.”

Among those who are looking to the government for help is Magdelena Prosenic, a single mom of two young children who was waiting in line at a community food pantry in south London.

For 5 pounds, people can buy 20 items of fresh fruit, vegetables and essential items like tinned beans and pasta. But eggs, which have shot up in price, are in high demand, and there are only enough for those who come early.

“We are on benefits, but it’s hard to provide for two children without help,” Prosenic said Wednesday. “The kids need fruit, they need nappies and formula.”

Anna Sjovorr-Packham, who runs the pantry, said the numbers of families buying food from them is creeping up “slowly but steadily.” And the cold winter months are coming, when families need to spend more on heating.

“I think there was once an idea that people who access food pantries may need the service as a last-case scenario — there may be a stigma about the type of person,″ she said. “But now the pantries are definitely utilized by everybody.”