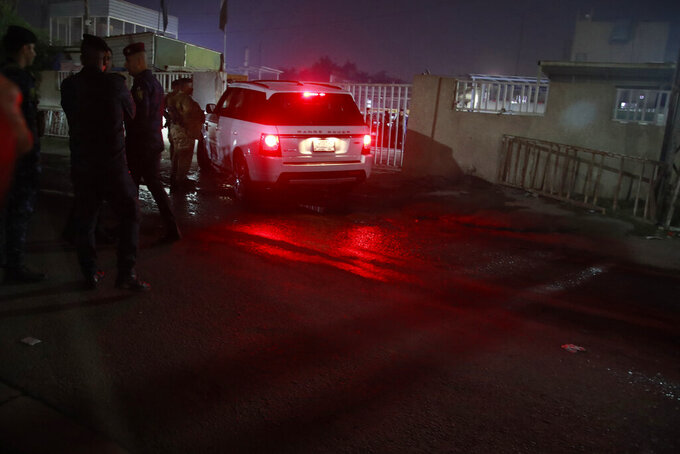 BAGHDAD (AP) — An American citizen who was fatally shot in central Baghdad was identified as 45-year-old Stephen Edward Troell, the U.S. Embassy based in the capital said Tuesday.

Troell, a native of Tennessee, was killed by unknown assailants in his car as he pulled up to the street where he lived with his family in Baghdad's central Karrada district. It was a rare killing of a foreigner in Iraq, where security conditions have improved in recent years, even opening the door for tourism.

The embassy said it was closely monitoring an investigation begun by Iraqi authorities, but declined to comment further out of respect for his mourning family, the embassy statement said.

A State Department official said Troell was a private citizen with no connection to the government. He spoke on condition of anonymity because he was not authorized to go on the record.

The circumstances surrounding Troell's death are shrouded in mystery. No group has claimed responsibility for the killing. Security officials dismissed the possibility it was a kidnapping gone wrong.

“This was a cowardly crime against an American citizen and resident of our country who is known amongst the community,” al-Sudani said at a press conference Tuesday.

“Its timing brings up question marks," he said, referring to widespread speculation the attack may have been perpetrated by rival groups intending on undermine his premiership. "This is a red line for us. Those who want to test our government in terms of security will fail."

Security officials said as Troell drove through his street toward his home in Karrada's Wahda area on Monday, a car cut him off and assailants in another vehicle then shot him dead. The officials also said his wife was in the car with him but had not been hurt. Her whereabouts and that of their children are not known.

The Associated Press reached out to Millennium's main country office in the northern province of Dohuk, but local authorities said it had not been operating for two years.

Officials also told the AP the NGO was known to conduct Christian missionary work along with its development activities. The officials spoke on the condition of anonymity because they were not authorized to brief media.

On its website, Millennium expressed sorrow over the “tragedy” of Troell's killing and said he had been managing promotions and advertising at the language school while his wife was the manager.

The language school issued a statement on its Facebook page bidding farewell to Troell. It promised to spread his message of "teaching the English language to spread love and peace for the sake of rebuilding our country.”

In a video posted on Oct. 17, Troell is enthusiastic and announces new conversation classes and urges Iraqis to register.

Troell and his family lived in a small two-story house with a small yard in a neighborhood where many companies, local and foreign, rent out buildings. A security guard nearby said Troell would greet him in Arabic every morning on his way to work.

“He was very much loved by the neighbors,” Abu Ali said. He did not provide his full name.

Troell's social media profile shows he was a deeply religious and devoted family man, often posting photos with his wife and three young daughters, with a special devotion for the Middle East. In his Twitter biography he described himself as living and serving in the region.

In one post, Troell posed with his wife on a Baghdad bridge as the sun set behind them. “What a wonderful place!” he wrote.

In the early years that followed the U.S.-led invasion of Iraq in 2003, such attacks were common. In 2004, two Americans were kidnapped in Baghdad and extremists later released videos showing their beheading.