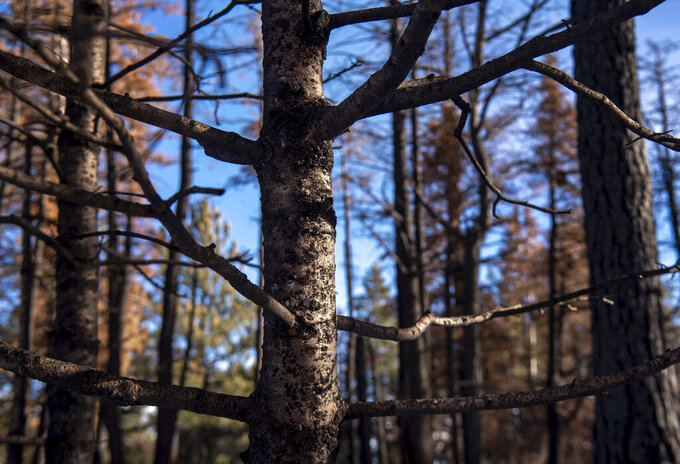 Eddie Moore, ASSOCIATED PRESS
Trees that could have been used for Christmas trees that were burned last spring by the Calf Canyon/Hermits Peak Fire are shown Monday, Nov. 28, 2022, near Holman, N.M. Local families once cut thousands of Christmas trees in the mountains around the Mora Valley. (Eddie Moore/The Albuquerque Journal via AP)

MORA, N.M. (AP) — The Monday after Thanksgiving, Deanna Trujillo stood in the bed of her truck, watching Christmas tree after Christmas tree pile up in her trailer.

There were 101 in total — Trujillo, who sells Mora-grown Christmas trees every year, has to keep careful count for her taxes. It took six men to load the trailer, sometimes throwing trees by hand and, at other times, dropping them from a forklift.

Trujillo inspected one of the trees, which had an orange patch among its green needles.

“These ones are just burned,” she said. “We might have to turn them into just rama.”

Trujillo uses the rama, or boughs, to make wreaths and leafy crosses. Her family in Mora has been in the Christmas tree business for decades — but, reeling from the damage of the Calf Canyon/Hermits Peak Fire, Trujillo wasn’t sure they’d be able to open her Albuquerque lot this year.

“The fire killed us,” Trujillo told the Albuquerque Journal. “It hurt us really bad.”

The largest recorded fire in the state’s history, the blaze burned across more than 140,000 acres of public land and almost 200,000 acres of private property in northern New Mexico.

Between Trujillo, her cousin Raúl Arellano and uncle Orlando Roybal, the family owns about 2,800 acres of land in Mora. Of that, 1,500 acres were burned.

“This used to be … how we give back. The trees were plentiful,” Trujillo said. “We could bring Christmas to Albuquerque.”

Trujillo and Arellano are part of the Roybal Christmas tree dynasty. Their grandfather, Alfredo Roybal, started selling Mora Christmas trees more than 60 years ago in Texas and California. He gained acclaim when he sold three trees to the “I Love Lucy” show.

Trujillo describes the seasonal business as the “annual family fight,” although she said they always make up by the end.

“We do this for fun,” Trujillo said.

“When you go to the lot and see the excitement, it’s unreal,” Arellano said.

They sell a variety of tree species, including blue spruce, white fir, Engelmann spruce and piñon.

Arellano, who started working the tree lot at age 10, estimates the family lost between 20,000 and 30,000 Christmas trees during the fire in a once-plentiful forest. The damage left them with just one-tenth of their original supply. And some of the remaining trees were damaged by the heat, making them unfit to sell as whole trees.

“You couldn’t see through this forest (before the fire),” Arellano said, pointing through a grove of thin, blackened trunks near his land. Located in the mountains near Holman, his property still had a cover of snow that had since melted in Mora Valley down below.

When she first returned to Mora after evacuating to Albuquerque, Trujillo said even the ground was burned, including seeds.

“The first time I was back in the county, it (the ground) was black,” Trujillo said.

A three-part soil burn severity analysis by the Forest Service Burned Area Emergency Response team found that, of the 341,735 acres burned in the fire, 54% of the soil was moderately or severely burned.

John Bartley, who owns Gascon Ranch north of Las Vegas, said his property was transformed by the fire.

“It’s night and day,” Bartley said. “We live in one of the most beautiful canyons in northern New Mexico. … You know, it’s an eyesore now.”

Bartley has been farming trees for timber and as Christmas trees since 1979 at his 4,000-acre ranch.

In the past, he could harvest between 700 and 1,000 Christmas tree per year from several plots. Every year, he sent hundreds of trees to Albuquerque.

The fire reduced his half-dozen Christmas tree plots to just one. Seventy-five percent of his property burned.

“There was one little spot to the north of our place that didn’t burn,” Bartley said. “I was able to scrounge 100 trees, and that’s it. I’m done.”

He said the fire almost put him out of business.

“It’s heartbreaking,” Bartley said. “I don’t know if we’ll ever get it back. I’m hoping we will, but I don’t know.”

David Velasquez, who got into selling trees “over a few beers” in high school 51 years ago, is originally from Mora. He sells trees out of Dave’s Evergreens in Albuquerque. He doesn’t get his trees out of Mora, however — he cuts them from a private ranch in Chama, Colorado.

“I think there might be a shortage of native New Mexican trees this year,” Velasquez said.

Arellano said he used to be able to cut 100 trees in half a day on his own property. Now, it takes three days to cut that many and he has to pay to cut trees owned by other Mora residents.

In the early afternoon, Arellano drove a bumpy path through the woods, crossing a rocky spring and crunching over a thin layer of snow to pick up a single 14-foot tree.

By Thanksgiving last year, Arellano said they had already cut about 500 trees. He’s only cut 250 so far this year.

“We’ve come to almost a dead halt compared to what they used to do,” Arellano said. ___

In September, President Joe Biden signed the Hermit’s Peak Fire Assistance Act, which provides $2.5 billion to victims of the fire. The funds, which New Mexico and tribal nation residents can apply for with a notice of loss form, are intended to cover eligible personal injury, property, business and financial losses.

In draft regulations from the Federal Emergency Management Agency published Nov. 14, the agency stated that it would be limiting compensation for lost trees to 25% of its pre-fire value unless the trees were associated with a business. The regulations are currently up for public comment until Jan. 13, and could change.

But even determining the value of burned trees could be difficult, Arellano said.

“It’s hard to put a dollar amount on trees,” Arellano said. “A tree could be worth a million dollars.”

Neither Arellano nor Trujillo has received federal compensation for their trees yet.

“This is gonna be chaos,” Arellano said. “This is our livelihood.”

Trujillo added that the Christmas tree business brings essential income to the family.

“It gets us through the winter,” Trujillo said. “This is our winter money.”

Trujillo doesn’t want to sell out-of-state trees. New Mexico-grown trees, she said, are cut closer to Christmas than imported trees from the Pacific Northwest, and stay fresher longer. And, Trujillo said, many of her repeat customers look specifically for Mora trees.

“We just can’t do out-of-state trees,” Trujillo said. “There’s no way we can sell them a tree that won’t last ‘till Christmas.”

In the winter of 2020, Trujillo put up a Mora Christmas tree. It lasted so long, she said, that she decorated it for Valentine’s Day, Easter and St. Patrick’s Day until her sons finally made her throw it out.

Operating the tree business is more costly now. Rather than cutting trees from their own property, Arellano and Trujillo have to buy trees from other property owners who had less fire damage.

A neighboring property owner, Willie Olivas, has helped Trujillo and Arellano find trees and transport them.

“We just all pull together and make it happen,” Trujillo said.

Arellano said he’s had to increase prices by $10 per tree to make up for the increased labor to find trees — as well as higher gas prices.

Bartley has already requested 1,000 seedlings from the John T. Harrington Forestry Research Center to try and regrow the trees at his ranch. But, averaging a foot of growth per year, it could be almost 10 years before Bartley’s seedlings are ready to harvest.

Arellano said that he’s planning to plant new seedlings this year. The family has never had to plant before — the forest replenished by itself.

Trujillo said that the forest service has been busy reseeding the forest. It could take many years for some slower growing trees to return.

“I don’t think we’re gonna see a white fir for about 10 years,” Trujillo said. “But they do grow.”

Arellano, 57, doesn’t think his property will recover for decades.

Arellano hefted a 16-foot tree to top off the trailer. It was one of several 10-foot-plus tall trees in the trailer, including a 13-foot special order.

The tall trees can be pricey.

“(It costs) an arm and a leg,” Trujillo said. “That’s what people in Albuquerque want.”

Despite the decreased supply, demand has not gone down at Mora Christmas Trees. “I got people coming to the lot like crazy,” Trujillo said.

She also said that running the tree lot is their time to catch up with annual customers.

They have a customer they nicknamed “Piñon Paul” because he buys the Southwestern pine every year. This year, they set aside two piñons for him.

When she was considering not opening the lot this year, Trujillo said that she received several Facebook messages from customers that convinced her to open.