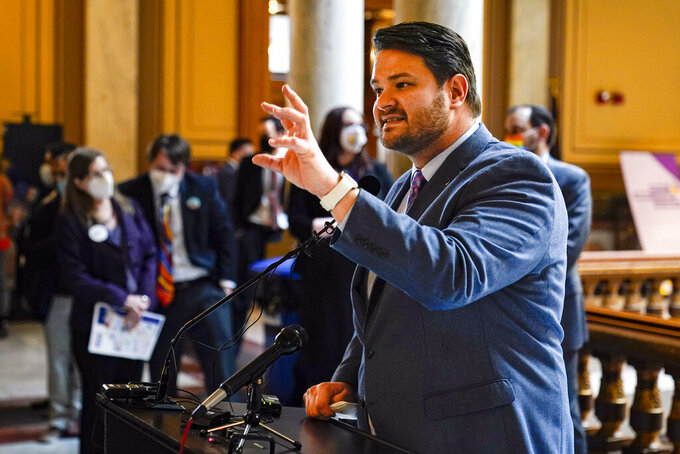 INDIANAPOLIS (AP) — Democrats and activists are holding out little hope of getting the votes needed to uphold the Indiana governor’s veto of a bill banning transgender athletes from competing in school sports.

The Republican-dominated Legislature is slated to override the veto by GOP Gov. Eric Holcomb, who said in March that the legislation doesn't provide a consistent policy for what he called “fairness in K-12 sports.” But the bill passed by wide margins and Republican leaders in the House and Senate pledged to override Holcomb's veto with simple majorities.

Although two Republicans in the House and seven in the Senate voted against the measure, Democratic Sen. J.D. Ford of Indianapolis said the override will likely be successful when the Legislature reconvenes for one day on Tuesday.

“This bill was filed, I believe, with the intention to specifically go after transgender Hoosiers because it was a politically savvy thing to do for the Republican base," Ford said Friday.

Still, Ford said Democrats continue to have conversations with lawmakers across the aisle, noting that some Republicans might be inclined to change their votes following the primary and the governor's veto.

Holcomb signaled support for the bill in February but pointed in his veto letter to the Indiana High School Athletic Association, which has a policy covering transgender students wanting to play sports that match their gender identity and has said no transgender girls have finalized a request to play on a girls team.

Republican state Attorney General Todd Rokita, who joined other prominent Indiana Republicans to call for an override, said in a letter published Thursday that Holcomb's reasoning for the veto “is BS," and that the attorney general's office “stands ready to uphold the law and defend any challenges.”

“Hoosiers won’t be bullied by woke groups threatening girls’ sports,” said Rokita, who had a senior prosecutor testify at legislative hearings in support of the bill while Holcomb stayed out of the debate as hundreds of bill opponents attended Statehouse rallies.

The governor’s office did not comment Friday on whether Holcomb was trying to sway lawmakers to uphold his veto and declined to respond to Rokita’s comments.

Republican sponsors of the bill maintain it is needed to protect the integrity of female sports and opportunities for girls to gain college athletic scholarship but mentioned no instances in Indiana of girls being outperformed by transgender athletes.

Opponents argue the bill is a bigoted response to a problem that doesn’t exist. The American Civil Liberties Union of Indiana confirmed Friday that it intends to challenge what it called “hateful legislation.”

“We’re hopeful that other lawmakers have taken the time to do the research and read the bill and see that we should not be targeting children with laws,” said Chris Paulsen, CEO of Indiana Youth Group. “We have to assume that they’re pushing this through out of meanness and targeting LGBTQ people, especially trans people.”

Casey Smith is a corps member for the Associated Press/Report for America Statehouse News Initiative. Report for America is a nonprofit national service program that places journalists in local newsrooms to report on undercovered issues. Follow Smith on Twitter.