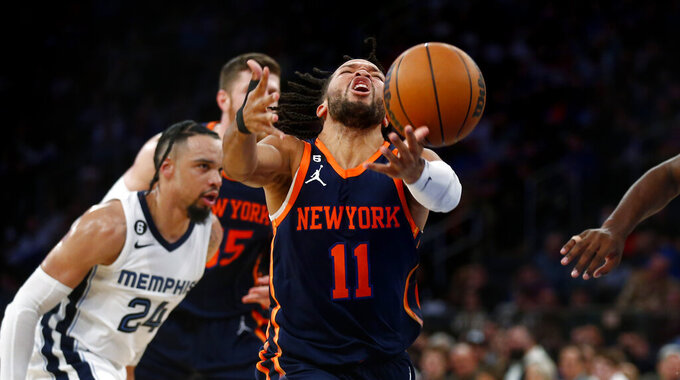 NEW YORK (AP) — After Ja Morant’s triple-double at Madison Square Garden on Sunday night, his father asked for his jersey.

One problem: The Grizzlies star planned to give it to Knicks veteran Derrick Rose.

“Honestly it was crazy, (because) it was the first time he ever asked for my jersey after the game," Morant said after finishing with 27 points, 14 assists and 10 rebounds as Memphis held off New York 127-123.

"So it was kind of awkward. I had already planned to give it to D-Rose. At first I told him I had already given it away, man. He was like, ‘Ugh,’” Morant said.

Morant has led the Memphis to three wins and one loss on the Knicks' court since entering the league in 2019, averaging 23.5 points and 9.8 assists. He had his fifth career triple-double Sunday.

Dillon Brooks had 23 points and Jaren Jackson Jr. added 21 for the Grizzlies, who lost a 12-point lead in the fourth quarter but recovered for their second straight victory.

Morant scored 10 points in the fourth quarter, hitting the go-ahead basket after rebounding his own miss with 13.9 seconds left in regulation.

“Amazing, he did it all,” Brooks said. “He didn’t force no shots. He was trying to get us involved. And then when it’s time to take over, he takes over.”

Jalen Brunson had 30 points and RJ Barrett added 22 for the Knicks, who have lost two straight and four of their last five.

New York lost at Memphis in the season opener for both teams Oct. 19, rallying from a 17-point deficit before falling short.

Brunson led New York’s comeback again this time with 17 fourth-quarter points before coming up short on two shots, missing one that would have put the Knicks in front and another that would have tied the game.

His two free throws gave the Knicks a 123-122 lead with 26 seconds remaining after Brooks fouled him after trying to swipe the ball away.

On the ensuing possession, Morant drove again into the lane and was met by two Knicks defenders, with Mitchell Robinson blocking his spinning layup attempt. But the ball came right back to Morant, who put it in to put Memphis back on top by one.

“It came down to the end. Mitch made hell of a block, Morant came up with the ball and put it back in," Knicks coach Tom Thibodeau said. "That’s the difference between winning and losing right there.”

Brunson missed a pullup jumper and Morant was fouled and hit one of his two free throws to increase the lead 125-123 with 7.1 seconds to go. Brunson was short on a runner that would have tied it.

“Two shots that made a lot of in my career and I rushed them,” Brunson said. “Plain and simple, I rushed it.”

Jackson picked up the rebounded Brunson’s miss. Brunson then fouled Jackson, who hit two free throws to seal it.

Jackson’s 3-pointer as time expired gave the Grizzlies a 54-51 lead at halftime.

Grizzlies: Memphis had an assist on each of the 11 shots it made in the first quarter and finished the game with 32. … Steven Adams had 16 points and 10 rebounds.

Knicks: G Immanuel Quickley was held out of the second half due to sore right knee. … Cam Reddish scored 11 points in 23 minutes off the bench. … Julius Randle had 14 points and 10 rebounds. … Robinson score 16 points and blocked five shots.