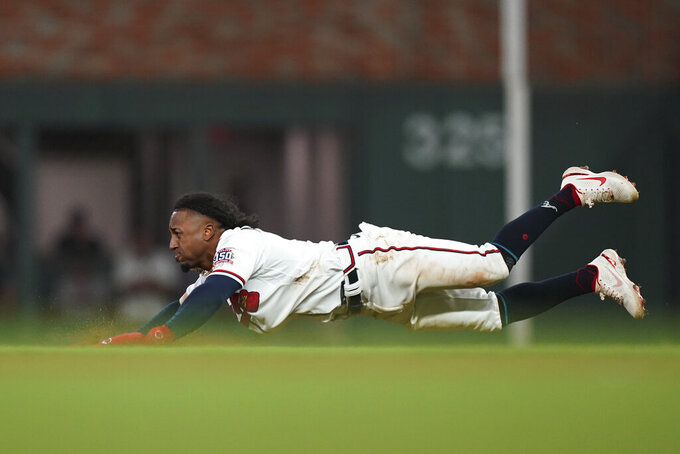 A look at what’s happening around the majors Monday:

SHIPPING UP TO BOSTON

After allowing 12 runs in two starts against Houston during the regular season, Eduardo Rodriguez is scheduled to start Game 3 at Fenway Park against the Astros and José Urquidy.

An autumn chill will be in the air, with a gametime temperature of 53 degrees forecast along with a 12 mph wind from the northwest.

“I heard it’s supposed to be cold, like New England fall cold, but this is something that you have to put out of your mind," Astros manager Dusty Baker said. “That’s probably the major challenge."

Charlie Morton will be on the mound for the Braves when the NL Championship Series resumes Tuesday at Dodger Stadium, following a day off.

Morton pitched the final four innings at Dodger Stadium in Game 7 of the 2017 World Series for Houston, allowing one run and two hits as the Astros won 5-1 for their first title.

“I try to forget it,” Dodgers manager Dave Roberts said Sunday. “Charlie’s a great competitor. I’ve admired him for a long time from a far. He’s that old school ballplayer, competitor, will take the ball anytime, and it’s fun to compete against a guy like that.”

The Astros opted not to work out Sunday at Fenway Park in favor of a later charter flight from Houston to Boston.

“We thought it was better that we work out here versus leave early in the morning,” Astros manager Dusty Baker said. “I wanted my guys to get a workout here and then get into Boston early enough to have a nice meal and relaxing time. Much like, you ever seen `Gladiator’ movies? They always have a good meal before the fight.”

With Ozzie Albies making a key steal in the ninth inning in the NL Championship Series opener and scoring the winning run on Austin Riley's single, Dodgers manager Dave Roberts again was reminded of his famous steal against the New York Yankees that sparked Boston's comeback from a 3-0 series deficit in the 2004 AL Championship.

“Oh, I think about it. Joe West reminds me every time I see him, that he made me famous, for making the right call, by the way,” Roberts said, referring to the umpire. “You just can’t be afraid to fail. I just think that careful in the postseason doesn’t play. So that’s kind of in the batter’s box, defensively, on the bases, and understanding the game score and how the game needs to be played, but if you feel good, you got to be all in.”

Through Saturday, 48.6% of runs in the postseason have scored on home runs.