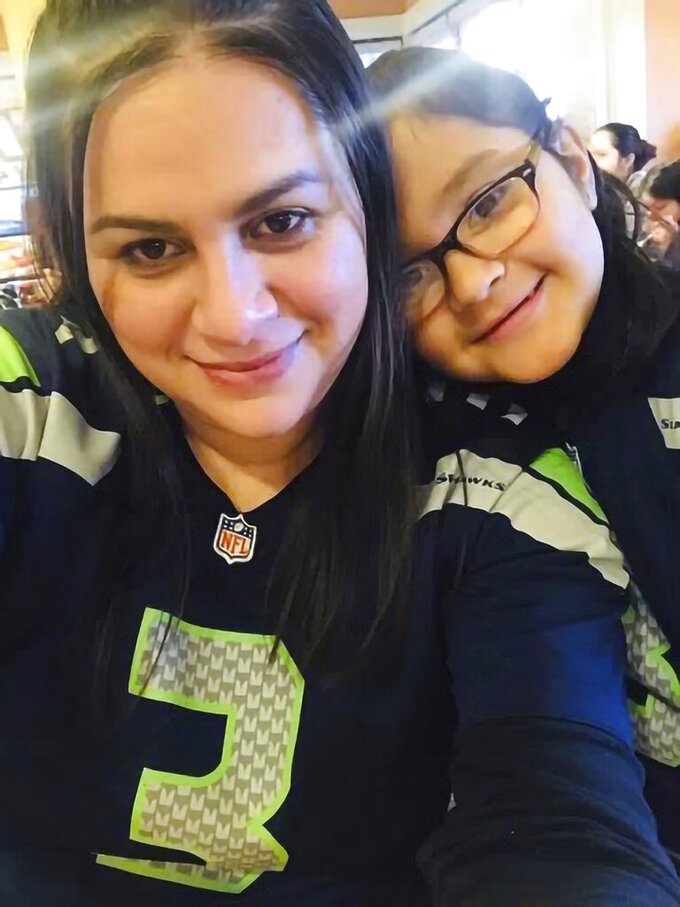 Yesenia Pacheco, ASSOCIATED PRESS
In this undated photo provided by her attorneys, Yesenia Pacheco poses with her daughter Sandra, 10. Pacheco became pregnant with her after a federally funded health clinic mistakenly gave her a shot of flu vaccine instead of contraceptive. Sandra was born with congenital defects, and a federal judge awarded the family $10 million. On Thursday, Aug. 18, 2022, the Washington Supreme Court ruled unanimously that such damage awards are appropriate under state law. (Yesenia Pacheco via AP)

SEATTLE (AP) — The Washington Supreme Court says that under state law, it's OK for judges to award extraordinary damages in so-called “wrongful life” cases where a child has birth defects or disabilities that require extensive care.

The unanimous decision Thursday came in the case of a woman who became pregnant in 2011 after a federally funded health clinic mistakenly gave her a shot of flu vaccine instead of the contraceptive Depo-Provera. Her child was born with a condition that causes cognitive delays, slowed speech and language skills, epilepsy and vision problems.

Following a trial in 2020, U.S. District Judge Robert Lasnik awarded the child, Sandra, and her parents, Yesenia Pacheco and Luis Lemus, $10 million — $7.5 million for her medical, educational and other expenses, and $2.5 million in damages for her parents.

The federal government was ordered to pay the damages because the Neighborcare clinic is federally funded and serves low-income patients.

The Justice Department appealed to the 9th U.S. Circuit Court of Appeals. It argued that because the woman did not seek birth control specifically to prevent the birth of a child with congenital defects, that wasn't a foreseeable outcome of the clinic's negligence. Nor were the child's disabilities caused by the clinic's negligence, the DOJ claimed.

The government said it should be liable only for costs associated with the pregnancy and birth — about $42,000 — not damages for ongoing care and expenses following that birth.

The 9th Circuit asked the Washington Supreme Court to clarify state law regarding negligent reproductive health care, and in a 9-0 decision authored by Justice Mary Yu, the court rejected the government's arguments.

Yu noted that a birth is a foreseeable outcome of a pregnancy, and that some children are born with congenital defects, so that was foreseeable, too. Washington is “one of the few states that recognize a broad range of claims by both parents and children," Yu wrote.

The 9th Circuit still must determine whether Lasnik's decision should be affirmed, but Mike Maxwell, an attorney for the family, said the ruling should all but end the case after seven years of litigation. He criticized the government for bringing the appeal.

“I don't know what's left to argue about,” he told The Associated Press. “This whole appeal has served no purpose other than delaying her care and further injuring this child. It's been a long road. The government needs to pay.”

The U.S. Attorney's Office in Seattle did not immediately issue a response to the ruling or to Maxwell's criticism.

The child, who turned 10 this month, continues living with her parents in the Everett area, Maxwell said. She is mostly blind, suffers seizures, falls often and is “horribly disabled,” but without the damages awarded by the court being actually paid, her mother and father — who work in fast food and as a janitor, respectively — have been unable to afford care for her.

Pacheco is an El Salvadoran refugee who moved to the U.S. when she was 16. She had gone to the clinic for a quarterly injection of Depo-Provera, a hormone used for birth control, but a medical assistant who had been administering walk-in flu shots all day gave her the flu vaccine instead.

The clinic didn't inform Pacheco of the error until she called to make her next appointment. By then, she was pregnant.

The justices also used the opinion to disavow demeaning terminology the Washington Supreme Court used in prior rulings concerning children with birth defects.

“It is both incorrect and harmful to refer to any person as ‘defective’ or to suggest that a child with congenital defects is not ‘normal,’” the court said.