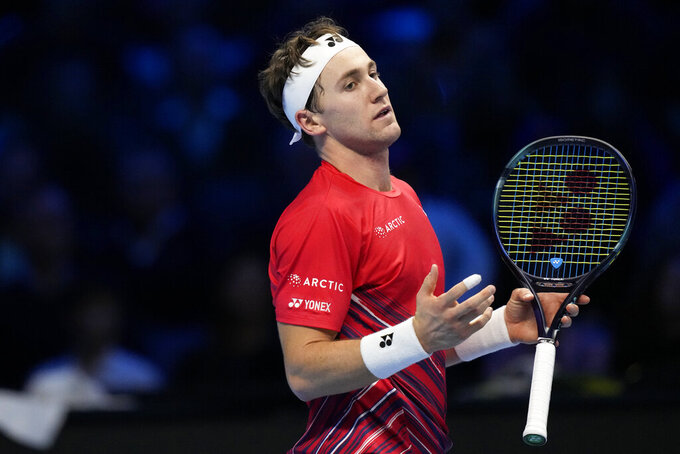 TURIN, Italy (AP) — Novak Djokovic claimed a record-equaling sixth ATP Finals title by beating the third-seeded Casper Ruud on Sunday to top a fantastic finish to the season for the Serb.

Djokovic won 7-5, 6-3 to secure his first title at the event since 2015 and match Roger Federer’s record.

The 35-year-old Djokovic, who had lost his two previous finals at the event, raised his arms out and smiled broadly after sealing the match with an ace.

“Seven years has been a long time,” Djokovic said. "At the same time, the fact that I waited seven years makes this victory even sweeter and even bigger.

“A lot of nerves ... I missed a couple of forehands in the last game when I was serving for it. I had nerves, but I am really grateful to be able to serve the match out. I had a big ace to close out.

Djokovic became the oldest champion at the prestigious year-end tournament and also earned the largest payday in tennis history as he walked away with $4.7 million for claiming the ATP Finals trophy undefeated.

"I made him run, made him play," Djokovic said. "I was looking to be very aggressive and it worked great. I am really pleased with the performance.”

It was Ruud’s fourth defeat in a major championship match this year after also losing finals at Miami, Roland Garros and the U.S. Open. Ruud has never won a set against Djokovic in four meetings.

“It has been a year of many highs, some really big highs. Of course, some lows,” Ruud said. "I look forward to the next season already.”

Djokovic started strongly in Turin and had two break points in Ruud’s very first service game. The Norwegian managed to recover although he was also forced to save another break point in the eighth game.

Djokovic finally broke Ruud’s serve at the fourth time of asking. And it was at a crucial moment, on set point, and he ecstatically pumped his fist in the air after Ruud sent a backhand long.

The seventh-seeded Djokovic broke again in the fourth game of the second set and there was no way back for Ruud.

Djokovic has ended the year with an 18-1 record after winning trophies in Tel Aviv and Astana before reaching the Paris Masters final. His five titles this season also include triumphs at Wimbledon and in Rome.