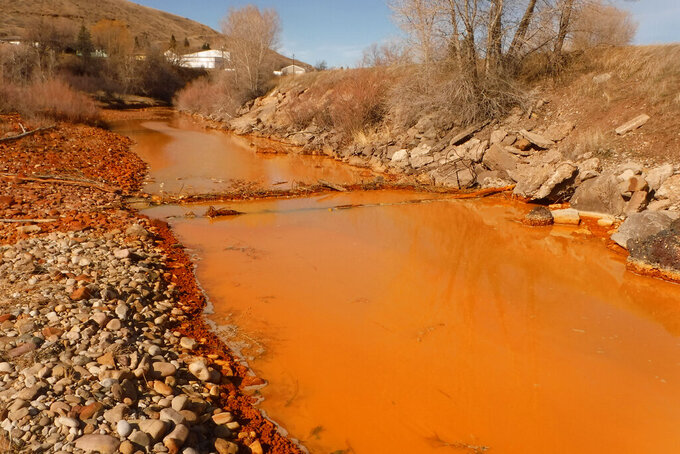 Tom Henderson, ASSOCIATED PRESS
FILE - This March 7, 2016, file photo, provided by the Montana Department of Environmental Quality shows pollution in Belt Creek near the town of Belt in central Montana. Work began in early October on a $26 million project to treat acid mine drainage from an old coal mine that is polluting the creek, sometimes causing it to turn a rusty color. (Tom Henderson/Montana Department of Environmental Quality via AP)

For 50 years men worked the mines ringing the small town east of Great Falls. The coal they harvested was first used to power the paddle-wheelers that once plied the Missouri River. Later it fired the smelters of the Anaconda Copper Company, churning out the copper so desperately needed to electrify America.

But when Belt’s coal mines played out in the 1920s, they left behind a legacy of acid mine drainage that has fouled the waters of Belt Creek for nearly a century.

From late fall through early spring, when the flow of Belt Creek is at its lowest, the water running through Belt and north to the Missouri River turns dark orange, a telltale sign of the high concentration of sulfuric acid draining into it.

A long awaited project to capture and treat the polluted mine runoff before it reaches the creek got underway in early October. Given a little time to heal itself, the lower reaches of Belt Creek are expected to run clean once again, likely before the end of the decade.

“I’ve been working on this thing for 15 years,” Cascade County Commissioner Jim Larson told the Great Falls Tribune. “This is a big deal, not just for the people of Belt, but for all of Cascade County.”

The push to clean up coal mine waste — not just in Belt Creek but at thousands of abandoned mine sites across the country — began in 1977 when Congress passed the Surface Mining Control and Reclamation Act (SMCRA). The Act established a new tax upon coal production in the United States, with money set aside to bear the cost of environmental mitigation at coal mines abandoned prior to 1977.

“It applies a tax for surface mined coal of 28.5 cents a ton,” explained Bill Snoddy, program manager of the Montana Department of Environmental Quality’s Abandoned Mine Lands Program. “The federal government keeps half of that tax to administer the law, and the other half goes to the state where the coal was produced. We take that money and put it into projects like this.”

While Montana’s Abandoned Mine Land Program (AML) has successfully taken on close to 300 projects across the state since its establishment in 1980, the project at Belt Creek counts as one of the largest and most expensive it has ever attempted.

“This is a really big project,” Snoddy said. “This is a big deal for my program. We’re excited about it. It’s going to make a big difference for the town of Belt when it’s all finished.”

When completed, the Belt Creek Water Treatment Plant will have the capacity to treat the more than 80 million gallons of acid mine drainage that contaminates Belt Creek each year. The cost to complete the plant alone is estimated at between $7 million and $9 million.

Perhaps even more impressive are the measures AML is taking to ensure operations and maintenance at the Belt Creek Plant will continue far into the foreseeable future. An endowment of approximately $17 million will be established to cover the plant’s $500,000 annual operating costs with little or no additional expense to the people of Belt or Cascade County.

“We don’t charge individuals or a town like Belt for services we can provide,” Snoddy explained. “It’s all funded by active coal mines in the state, and we’re very cognizant of their contribution and use the money well. It’s taken since 2013 to save up enough money to have that operations and management cushion before we could go forward.”

The problem at abandoned coal mines like those in Belt stems from the presence of naturally occurring pyrite nodules within the exposed coal seam. As groundwater flows into the open mine workings it comes into contact with these pyrite nodules, which can be up to four inches in diameter.

The pyrite breaks down, forming iron hydroxide and sulfuric acid. Water discharged from the mine becomes acidic, with a pH factor roughly equivalent to Coca-Cola. The drainage also contains extremely high levels of dissolved metals such as aluminum, cadmium, nickel and zinc that turn orange when exposed to oxygen.

Contaminated water now flowing from the abandoned mine openings (called adits) will be pumped to the treatment plant where it will be blended with hydrated lime. The lime neutralizes the sulfuric acid, allowing the suspended metals to settle out.

What remains is the treated water that will be pumped back into Belt Creek, and a thick sludge that remains at the bottom of settling ponds. The sludge is then pressed and dried to remove any remaining water.

The final destination for the tons of sludge that will be generated by the treatment plant has yet to be determined. Most likely it will either be disposed of at a licensed landfill or deposited at a DEQ repository established near Belt. One other alternative would be to re-inject the sludge back into the underground mine workings.

“There’s nothing particularly hazardous about the sludge,” said Drew Herrera, project manager for Spectrum Engineering and Environmental, the Billings-based firm that has been awarded the contract to build the Belt Creek Water Treatment Plant. “It’s just iron and water. It does have other metals in it, but there’s nothing inherently dangerous about it. There’s no sulfuric acid once the sludge is generated.”

Technical aspects aside, the real benefits of the acid mine waste project at Belt will be realized when the creek returns to being the clear mountain stream it once was, more than a century ago.

“For people to be able to be out in their backyard and have a good view of clean water, kids being able to play in it, people being able to fish in it. That’s my goal,” Snoddy said of the stream’s future. “That’s what I would like to see, and it’s absolutely doable.”