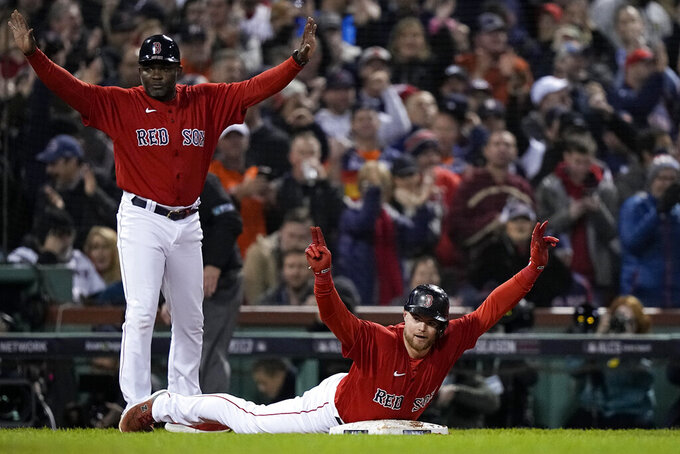 In a postseason already marked by curious pitching strategy, Julio Urías returns to his regular role in the rotation when the Los Angeles Dodgers play Atlanta in Game 4 of the NL Championship Series.

Braves manager Brian Snitker says he'll go with a bullpen game. After losing 6-5 on Tuesday night, he said he hadn't decided who would start.

Urías led the majors with 20 wins this season while pitching 32 times, all as a starter. After starting and winning Game 2 of the NL Division Series against San Francisco, he threw four key innings of relief in the deciding Game 5 victory over the Giants.

Urías then blew a late lead in relief in Game 2 of the NLCS, allowing Atlanta to eventually win. Los Angeles trails the series 2-1 going into this matchup at Dodger Stadium.

The 25-year-old lefty excelled as a starter and reliever in the postseason last year, helping the Dodgers win their first World Series championship since 1988.

Earlier this month, Dodgers ace Max Scherzer became the closer for a day, finishing off the Giants in Game 5.

On Tuesday night, the Boston Red Sox used Nathan Eovaldi in relief for the first time since 2019. Brought in to begin the ninth inning with the score tied against Houston in Game 4 of the AL Championship Series, he was charged with four runs.

The Astros won 9-2 to even the matchup at two games each.

In nine playoff games so far, only once has a starter pitched even three full innings against Boston. Astros ace Zack Greinke became the latest to get chased, lasting only 1 1/3 innings Tuesday night at Fenway Park in Game 4 of the AL Championship Series.

Tampa Bay's Shane McClanahan did the best against the Red Sox, going five innings in the opener of the AL Division Series.

The ALCS is tied at two games apiece going into Game 5 on Wednesday.

Framber Valdez will start for Houston. He gave up two earned runs in 2 2/3 innings during the series opener. Chris Sale starts for the Red Sox after allowing one run over 2 2/3 innings in Game 1.

Three months after struggles caused him to lose the closer’s job temporarily, Dodgers reliever Kenley Jansen is at the top of his game this October.

The 34-year-old right-hander has struck out 12 of the 17 batters he's faced in the playoffs, pitching five scoreless innings in six games. Jansen is 2-0 with one save, allowing two hits and no walks.

After the Dodgers scored four times in the eighth to take the lead over Atlanta in Game 3 of the NL Championship Series, Jansen struck out Austin Riley, Joc Pederson and Adam Duvall in order on 17 pitches, reaching a high of 95.2 mph as Duvall fanned on a sinker.

Jansen's save cut the Dodgers' deficit to 2-1.

“You learn from when you have to deal with adversity and knowing that I didn’t have my best two years the last couple of years,” Jansen said last week. “I’m a more experienced pitcher now instead of being stubborn out there and just die with one pitch.”

Astros manager Dusty Baker isn't a fan of some of the styling that goes on among today's players.

Baker, a two-time All-Star during a playing career from 1968-86, said Tuesday that “I’m past an opinion.”

“Back in my day you would have been probably pushing up daisies somewhere, you know what I mean?" he said. “It’s a new world, new day. There’s branding. There’s — I don’t know. I got a 22-year-old son. I try to get on him about, act like you have been there before, but, I mean, nobody seems to matter. So, I mean, what’s my opinion? I’m not going to — it’s too late for me to change the world.”

Correa tapped his wrist again after hitting a leadoff double in the ninth inning of Game 4. He later scored the go-ahead run in a 9-2 win.