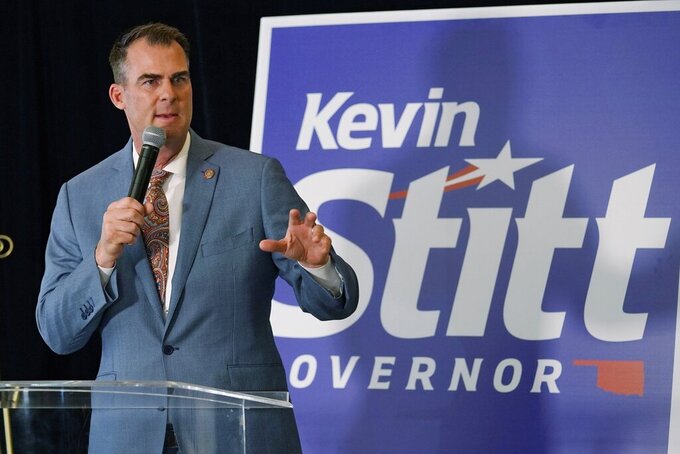 Sue Ogrocki, ASSOCIATED PRESS
FILE - In this June 28, 2022, photo, Oklahoma Gov. Kevin Stitt talks with the media before his election night watch party in Oklahoma City. A federal audit report sharply criticizes Oklahoma officials for a lack of oversight and accountability in the use of coronavirus relief funds intended for education. The state received nearly $40 million in pandemic assistance for the Governor's Emergency Education Relief, or GEER, Fund, and has returned more than $919,000 that was unspent. (AP Photo/Sue Ogrocki, File)

OKLAHOMA CITY (AP) — A federal audit report sharply criticizes Oklahoma officials for a lack of transparency, oversight and accountability in the use of coronavirus relief funds that were intended for education.

The state, which received nearly $40 million in pandemic assistance for the Governor's Emergency Education Relief, or GEER, Fund, has already returned more than $919,000 that was unspent from the program.

The U.S. Department of Education's Office of Inspector General report dated Monday recommends the state return nearly $653,000 more that was spent on non-education related items such as televisions and Xbox gaming systems by families that received grants. The document also calls for the state to audit another $5.4 million for possible refund of misspent funds, and develop better management and internal controls of the spending.

"Oklahoma could not support its stated processes for awarding funds to eligible entities that were either most significantly impacted by the coronavirus, as determined by the State, or deemed essential for carrying out emergency educational services, providing childcare and early childhood education, providing social and emotional support, or protecting education-related jobs," according to the report.

“As a result, Oklahoma lacks assurance that its awards to three entities under these initiatives ... aligned with the purpose of the GEER grant fund,” the report stated.

A spokesperson for Republican Gov. Kevin Stitt, Kate Vesper said the report is being reviewed.

“The governor is committed to transparency and accountability in state government,” Vesper said. “The state has been proactive in monitoring and ensuring appropriate use of Oklahoma taxpayer dollars, and an internal audit was initiated several months ago, that is ongoing for the Oklahoma GEER funds.”

The state blamed ClassWallet, the contractor hired to administer the programs, but that was rejected by the OIG.

“(The state) did not take advantage of an available ClassWallet internal control option, nor did it perform a review of the initiative’s expenditures,” according to the report. “As the recipient of the GEER grant funds, Oklahoma was responsible for ensuring that its grant funds were used properly.”

The internal control option could have been used to limit expenditures to educational-related only items, the report said.

The OIG reported that $8 million in GEER funds allocated to the Oklahoma State Department of Education “aligned with the purpose of the CARES Act to support” educational programs.

The OIG said Oklahoma has taken some corrective steps, but has not addressed recommendations that it provide documentation or a detailed written explanation of the process used to award the grants.