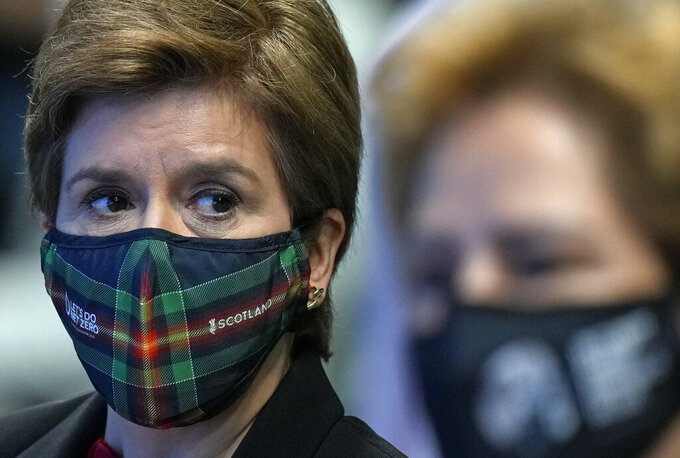 LONDON (AP) — Police said Monday that they spoke to Scotland’s leader to remind her about sticking to coronavirus mask rules after she was filmed without a face covering indoors while on the election trail.

Police Scotland said officers reminded First Minister Nicola Sturgeon of the “importance of wearing a face covering when there is a legal requirement to do so.” The force said no further action would be taken.

Sturgeon was filmed without a mask at a barber shop in East Kilbride, near Glasgow, while campaigning Saturday for next month’s local elections. Sturgeon later apologized, saying that “after a few seconds of being in the shop, I realized I had forgotten to put my face covering back on. I then immediately put it on.”

Sturgeon’s slip-up came two days before Scotland lifted the legal requirement to wear a mask in indoor public spaces. As of Monday it is only a recommendation to wear one in places such as shops and hairdressers and on public transportation.

Scotland is the last part of the U.K. to remove its mask mandate. England, Wales and Northern Ireland have already done so.

Sturgeon isn't the only politician who has been caught violating COVID-19 restrictions. U.K. Prime Minister Boris Johnson is facing calls to resign after being fined by police for attending a birthday party in his office in 2020 that broke coronavirus lockdown rules. Police are still investigating several other gatherings involving Johnson and his staff that may have breached the restrictions.