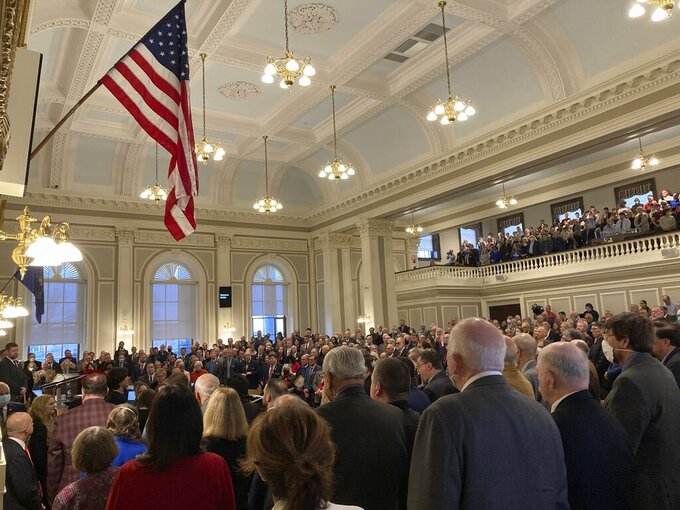 Holly Ramer, ASSOCIATED PRESS
Members of the New Hampshire House listen to the national anthem before being sworn into office, Wednesday, Dec. 7, 2022, in Concord, N.H. Republicans have a slim 201-198 advantage with one seat unsettled after a recount resulted in a tie. That race is headed to a special election. (AP Photo/Holly Ramer)

CONCORD, N.H. (AP) — New Hampshire’s deeply divided House came together for the first time Wednesday for series of votes that highlighted how critical attendance will be over the next two years.

The 400-member House headed into “Organization Day” split 201-198 with one seat unsettled after a recount ended in a tie. Most of those who were absent Wednesday were Democrats, giving Republicans a bit of breathing room when it came to re-electing Rep. Sherm Packard of Londonderry as House speaker.

Packard, who defeated Democratic Rep. Matt Wilhelm 205-184, became speaker two years ago after Rep. Dick Hinch died of COVID-19. He presided over the House in both a parking lot and a sports complex before lawmakers returned to the Statehouse in March.

Insisting the Legislature has emerged stronger after facing unprecedented challenges, Packard said Wednesday he is confident lawmakers can meet their latest challenge.

“The voters have sent us here with a never before seen balance of partisan makeup,” he said. “The only way we can forge ahead and be successful in this environment is by working together.”

It remains to be seen whether that will happen, however. Some Republicans wanted to use their slim majority to seat Republican David Walker of Rochester, one of the candidates involved in a tie. But, perhaps unsure of their numbers after some lawmakers left after lunch, they agreed instead to order a special election.

Election night results showed Walker defeating the incumbent Democrat, Rep. Chuck Grassie, by one vote, but a recount ended in a tie. Lawmakers could have chosen the winner themselves or had the men share the seat, but Wilhelm, who offered the resolution ordering a special election, said those options would disrespect voters.

“Any attempt by us to determine Rochester’s representation without further input from Rochester’s voters would be an unprecedented intrusion into voter’s wishes and a horrible look for the fairness of this body,” he said.

Control of the House has flipped in six of the last nine elections, most recently in 2020 when Republicans gained a 26-vote majority. The 24-seat state Senate has been more stable and Republicans maintained their 14-10 advantage in November. They elected Sen. Jeb Bradley as Senate president Wednesday.

Joined by the Senate, the House also elected David Scanlan as secretary of state on a vote of 237-175. Scanlan took over in January when longtime Secretary of State Bill Gardner retired, and he faced a challenge from former Democratic state Sen. Melanie Levesque.

Scanlan, a Republican and former lawmaker who served as deputy secretary of state for 20 years, said he was grateful for the bipartisan support.

“We’ve set a great foundation, and you’re gonna see some great stuff coming out of the office,” he said.