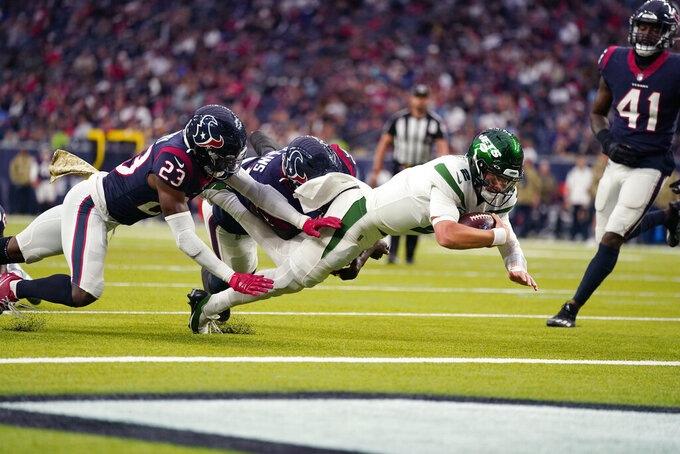 Cleaning up his footwork is the next step for the New York Jets rookie quarterback.

And it's a not-so-simple task for a player who was known for pulling off off-balance throws in college at BYU, but might need to rein things in a bit in the NFL as he adjusts to the speed and talent of the game at this level.

“It’s always a challenge, right?” Wilson said Thursday. "And I think the challenge is really finding the balance between being a robotic, very, like, paper quarterback and everything happens exactly like this. But things happen in games, guys get disrupted, timing gets off, the pocket moves. It’s finding the balance of how can I stay within the timing of the play? And then also still having good footwork and being able to go through my progressions.

“That’s what I’m really trying to work on is just how can I smoothly get through just my process?”

Wilson had a subpar first half last Sunday at Houston, going just 6 of 12 for 44 yards and an interception as the Jets fell behind. But he looked a lot more comfortable in the final two quarters, completing eight of 12 passes for 101 yards to go along with a go-ahead touchdown run in the 21-14 victory.

“Like a 22-year-old who hasn’t played in a month,” offensive coordinator Mike LaFleur said of how Wilson looked. "I think just him getting back was going to be just huge, in terms of obviously just his development. Went out there as an offense, didn’t start the way that we wanted to, obviously.

One thing that has popped up throughout his rookie season showed up again in Houston: happy feet. It's a product of inexperience, the pocket closing down and Wilson — not unlike most rookie quarterbacks — feeling the need to get out of danger and make a play.

It's what he did at BYU. But he can't always get away with that in the NFL.

“The big thing with Zach, and you’ll see it a lot with young quarterbacks, they get to No. 1 in progression and they’re usually waiting because they’re used to having time in the pocket from where they’ve come from,” coach Robert Saleh said. "In this league, you’ve got to be able to say ‘no’ faster, which will come in time.

“The second part is just consistency and footwork. In this game, your footwork has to be so consistent.”

The blueprint for what the Jets want Wilson to do was evident in how the offense perked up during his absence, becoming an efficient unit that consistently moved up and down the field under Mike White, Josh Johnson and Joe Flacco.

For two quarters last Sunday, it appeared it was reverting with Wilson back. He missed short throws, his footwork was off and the rust was evident. And then came the solid second half.

Saleh cited a play in the fourth quarter when Wilson connected with Ryan Griffin for 7 yards on third-and-8 in Houston territory. Saleh said Wilson's footwork wasn't “that great” and he didn't come off his first read fast enough and the play broke down.

“But even if he had perfect footwork on that particular play, the Texans covered it perfectly,” Saleh said. "If he went to one, two, three, it was going to be covered with the way the Texans covered it. Well, now, go activate your superpower and take off your cape and go be Superman, save the play. But try to execute the offense in rhythm and when the rhythm breaks down, now you go do what you were famous for at BYU.

“That’s all going to come with time and him understanding that his superpower — Clark Kent would walk around the sidewalk normal until somebody yells for help. When the play breaks down, that’s LaFleur yelling for help, go save him. That’s kind of how you balance it.”

Wilson is working on all of that, and he studies the film of other quarterbacks, too. He tries to glean things from the ways they attack defenses, seeing tendencies of the opponent — and potentially helping his own game move faster.

This week, he watched Tom Brady and Tampa Bay against Philadelphia, who Wilson and the Jets will face Sunday.

“I thought it was really cool to see kind of how he went through his whole process, how he navigated the pocket, different things like that,” Wilson said. “Aaron (Rodgers) is another one that we watch a lot of the time, too. In season, I always try to do that.

"Just to be like, OK, here’s what I’m doing, here’s what these guys are doing in the similar type of offense and what things stand out to me, what things that they consistently do each and every play to just be a quarterback.”

And finish every game on the right foot.