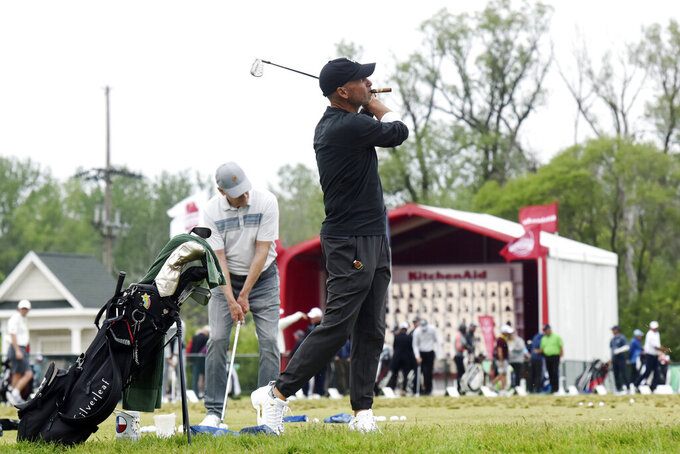 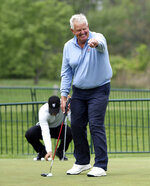 BENTON HARBOR, Mich. (AP) — Count Colin Montgomerie among those who aren’t surprised by the low winning scores in the Senior PGA Championship during its previous four visits to the Jack Nicklaus-designed Harbor Shores.

“I love the course,” said the veteran from Scotland, who won the first of his two Senior PGA titles here in 2014 with a 13-under 271 for a four-stroke victory over Tom Watson. “Some of the best golf courses in the world have weak holes. This doesn’t. It has 18 very, very strong golf holes.”

So how, Montgomerie was asked, have the last two winners at Harbor Shores – American Rocco Mediate in 2016 and England’s Paul Broadhurst in 2018 – managed to go even lower with winning scores of 19-under 265?

“Very fortunate with the weather,” added Montgomerie, who was runner-up to wire-to-wire winner Mediate at 268. “It’s a strong golf course, a golf course that is playable, and if you get favorable weather around anywhere in the world, you can score.”

The forecasts for the first two rounds Thursday and Friday are for showers, with sunny skies for the weekend.

“If the weather is decent here, you can go low here because of the conditions,” said the 2017 Senior PGA winner. Langer also has been fourth in 2012 (to England’s Roger Chapman’s 13-under 271), third in 2014 behind Montgomerie, and six shots behind Mediate for third in 2016. Langer did not play in 2018 when Broadhurst beat Tim Petrovic by four shots.

“The fairways are generous and there’s a lot of shots where you have to be committed. But if you hit the right pockets on the greens, you can go low.”

Just as Broadhurst did in 2018. He opened with a 72 but then played his final 54 holes in 20-under 193, with final rounds of 64 and 63 to earn the victory. Unfortunately, the COVID-19 pandemic wiped out his and the tournament’s 2020 return trip to Harbor Shores, where Germany’s Alex Cejka — who won last year’s Senior PGA at Southern Hills in Tulsa — is the defending champion.

“It’s nice to come back and play a course that you know you’ve played well on,” said Broadhurst, whose final-round 63 included making four putts of 30 feet or more. “I don’t think it’s a particularly tough driving course. It’s about positioning the ball on the greens. That’s massive around here.”

Cejka, who won back-to-back majors (the Regions Tradition and the Senior PGA) in 2021, is cramming to learn Harbor Shores. He didn’t play on media day in late March – the wind chill was in the low 20s – so Cejka jetted here Monday of PGA Championship week for a practice round before going to Tulsa, where he missed the cut.

“The course is already tricky, challenging around the greens when you don’t hit really good shots,” said Cejka. “It all depends on the weather.”

Cejka is one of several golfers playing Harbor Shores for the first time. The group is led by New Zealand’s Steve Alker, who leads the tour with $1,183,961 thanks to six top 10 finishes, including his two victories that are matched by Miguel Angel Jimenez of Spain, who is second with $952,708.

The “young guns” — Cejka is 51 and Alker is 50 — also include South Africans Retief Goosen (53) and Ernie Els (52), who are third and ninth on the money list. Ireland’s long-hitting Padraig Harrington, has played five events since turning 50 and has three seconds, including a runner-up to Regions Tradition champion Steve Stricker.

Stricker and Harrington were captains of the Ryder Cup teams that competed 118.2 nautical miles northwest across Lake Michigan at Whistling Straits in Wisconsin last September; the U.S. won 19-9. Unfortunately, Stricker, who tested positive for COVID-19 last Friday and withdrew Tuesday, is the only golfer among the tour’s Top 20 money winners not here.

“I’m getting more comfortable out here now,” said Harrington, who leads the tour in driving distance (299.3 yards) and already has earned $504,416. “I really like the golf course. It has a lot of risk/reward – nearly every hole has a hazard down the side. It kind of asks you to be brave.”