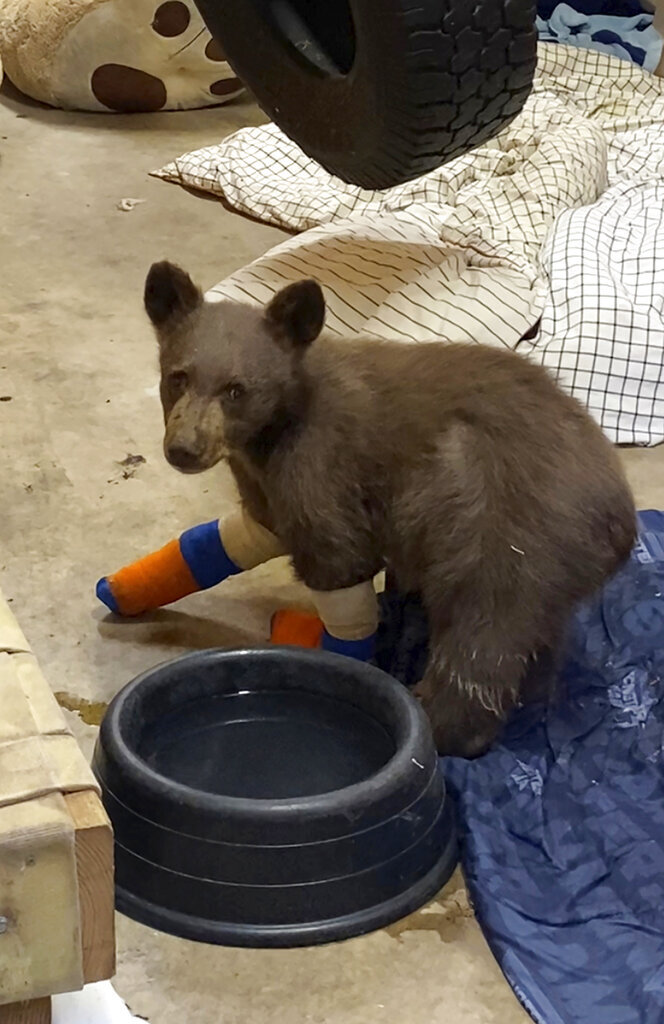 Uncredited, ASSOCIATED PRESS
FILE - This July 31, 2021, file photo provided by Lake Tahoe Wildlife Care shows a bear cub that was taken in for treatment after it suffered burns in a California wildfire, to Lake Tahoe Wildlife Care in South Lake Tahoe, Calif. A private donor's pledge to match $500,000 in contributions for a $1 million expansion at a Lake Tahoe wildlife rescue center is bringing smiles back to staff and volunteers who've been on an emotional rollercoaster since the bear cub recovering from severe wildfire burns made a much-publicized escape back into the wild. (Lake Tahoe Wildlife Care via AP, File)

RENO, Nev. (AP) — Private donors' new pledge to match $500,000 in contributions for a $1 million-expansion at a Lake Tahoe wildlife rescue center is bringing smiles back to staff and volunteers, who have been on an emotional rollercoaster since a bear cub being treated for severe wildfire burns made a much-publicized escape this summer.

The Lake Tahoe Wildlife Center has been making repairs directed by California regulators since Tamarack — named after the wildfire that blazed across more than 100 square miles (259 square kilometers) in the Sierra and severely burned the cub's paws — tunneled under an electric fence and fled back to the wild.

It was the first escape in the 45-year-history of the center in South Lake Tahoe, California.

Two days later, volunteers spotted and photographed a cub clinging to a tree 40 feet (12 meters) up in a nearby forest. They became convinced it was the 6-month-old escapee, decided to leave him alone and now believe he’s doing just fine.

The contribution the Bentley Foundation and MH Buckeye announced this week may just be the happy ending they’ve been looking for.

“We’ve turned the corner,” center spokesman Greg Erfani told The Associated Press. As of Wednesday, they were only $180,000 short of the $1.05 million needed to begin construction in the spring and finish by the end of 2022.

“It’s going to build the first animal hospital in the Lake Tahoe area,” he said.

The center has continued to rescue smaller animals and recently released seven rehabilitated coyote pups. But it's been prohibited from accepting big game including bears since the California Department of Fish and Wildlife declared in October that it had to make improvements to its enclosures and fencing.

“Upon completion, CDFW will perform a site inspection and evaluate (the center's) request to renew its agreement to temporarily possess and rehabilitate injured and orphaned black bear cubs," department spokesman Peter Tira said in an email to AP on Wednesday.

Erfani said supply-chain challenges have delayed immediate repairs but the center should be fully up and running by next month, bears and all.

The tale of his rescue-turned-escape began July 26 when a homeowner in Markleeville, California, spotted the cub crawling on his knees because his paws were so badly burned.

Photos of the bandaged black bear at the rescue center flooded social media and drew mention in international news coverage of the devastating fire that forced thousands of evacuations.

“Tamarack was sort of the first 'feel good’ story that came out of the fire. It was all destruction and heartbreak, and then there’s this little guy that had survived,” Erfani said this week. “Then, of course, that little stinker was not going to be caged. He just wanted out.”

The center announced his escape Aug. 3, warning anyone who spotted him to stay away and report sightings to wildlife officials.

Another flurry of publicity followed, less flattering than before.

“We got lambasted on social media. People were being nasty,” Erfani recalled. “It was very emotional for us because we had connections with him. A lot of people were really upset.”

Meanwhile, the center was doing everything it could to corral the cub, even sending up heat-seeking drones sometimes used to find lost hikers, Erfani said. “We spent a lot of time and money trying to find him. Our fear was that he wouldn’t be able to survive, so we didn’t give up.”

It paid off with the sighting of the cub clinging to the tree.

“We could tell he had all the same markings. But he appeared safe, and once released into the wild, we don’t bring them back,” he said.

“He wasn't happy being contained, pacing a lot. So, when we got him to a point where he could climb, that’s all he really needed. Once he got that defense ... his instincts kick in.”

Tamarack wasn’t like older bears who — because of issues including drought-driven food shortages — abandon the woods to rummage through garbage and sometimes break into Lake Tahoe homes.

“They become ‘urban’ bears," Erfani said. "Until the fire, (Tamarack) was from the backcountry, out in the wild. He never saw a house, never saw a car.”

“We like to believe he’s out there now in the wild, living the bear’s life.”