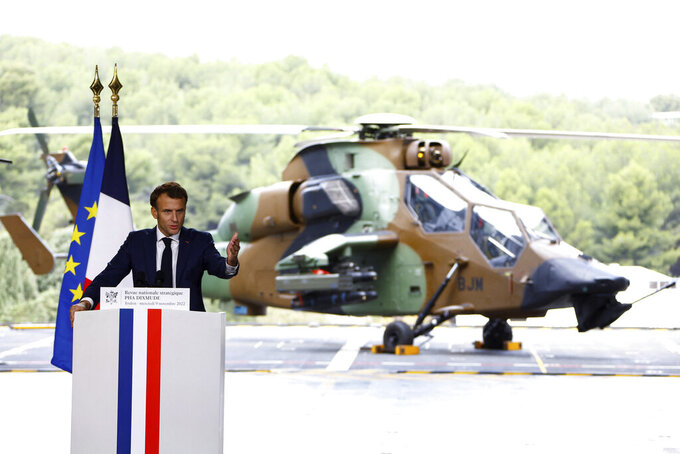 Eric Gaillard, ASSOCIATED PRESS
French President Emmanuel Macron delivers his speech at the French Navy base of Toulon, southern France, Wednesday, Nov. 9, 2022. Emmanuel Macron unveils the country's military strategy through the end of the decade for his nuclear-armed country, in the midst of Russia's war in Ukraine. (Eric Gaillard, Pool via AP)

PARIS (AP) — President Emmanuel Macron said Wednesday that France's military strategy must strengthen the country as an independent, respected nuclear-armed power through the end of the decade, warning against a risk of escalation and other global effects of Russia’s war in Ukraine.

“Europe is not sheltered anymore from missile and drone strikes. And we must integrate this reality,” Macron said, speaking on the Dixmude helicopter carrier, docked in the Mediterranean military base of Toulon which is home to more than 24,000 troops.

Russia’s aggression toward Ukraine “may precede broader geopolitical rivalries and a future that we have no reason to accept with fatalism,” Macron said, as he unveiled France’s “national strategic review,” meant to define how the country’s defense will look in 2030.

France wants to be an “independent, respected, agile power at the heart of the European strategic autonomy” with strong links to the Atlantic alliance, Macron said.

As war is back on the European continent, France wants to focus on boosting the European Union’s defense capacity building — the bloc of 27 nations’ security is still largely dependent on the U.S. and NATO.

“When peace is back in Ukraine, we will need to assess all the consequences” via a “new security architecture” on the continent, Macron said.

He insisted a “credible, modern” nuclear deterrence is key. France is the only EU country with nuclear weapons.

Macron was to be flown Wednesday afternoon to France’s newest nuclear attack submarine, the Suffren, before meeting later in the day with elite Navy commando members.

“Our nuclear forces contribute through their own existence to the security of France and Europe,” he said.

In rare public comments on the issue, Macron recently suggested a potential nuclear ballistic attack from Russia in the region would not bring any nuclear response from Paris. France’s doctrine “is based on what we call the fundamental interests of the nation. ... They would not at all be at stake” in such a situation, he said on French television last month.

France's new strategic document provides that the country will maintain a “capacity to lead military operations, including those of high intensity, alone or within a coalition."

French troops will maintain their large presence abroad in an area stretching from sub-Saharan Africa to the Middle East, through the Horn of Africa, Macron said.

He said France will launch talks in coming days with its African partners and regional organizations to make changes to the “status, format and missions of the current French military bases in the Sahel and West Africa.” A new organization, based on cooperation between French and local armed forces, will be finalized within six months of the discussions, he said.

Macron's speech marks the formal end of the so-called Barkhane force after France withdrew its troops from Mali earlier this year following tensions with the ruling military regime.

French operations to help fighting Islamic extremists in the Sahel region are focusing on Niger, Chad and Burkina Faso, where the country has about 3,000 troops.

In addition, Macron said France’s military strategy will include a new, specific mission to fight fake news and misinformation spread by “rivals,” especially to “manipulate civilian populations.” Macron implicitly referred to the growing influence of Russia in West Africa, including through anti-French social media campaigns.

France must be able to actively promote its actions, he said, and that’s why a substantial budget will be dedicated to what he called “influence” that will be coordinated by the government.

Amid other strategic goals, France aims at contributing to the stability of the Indo-Pacific zone and at ensuring freedom of action in “global common spaces” including the deep seabed, high seas, outer space and cyberspace.

A bill to be debated in Parliament at the beginning of next year will provide budget details.