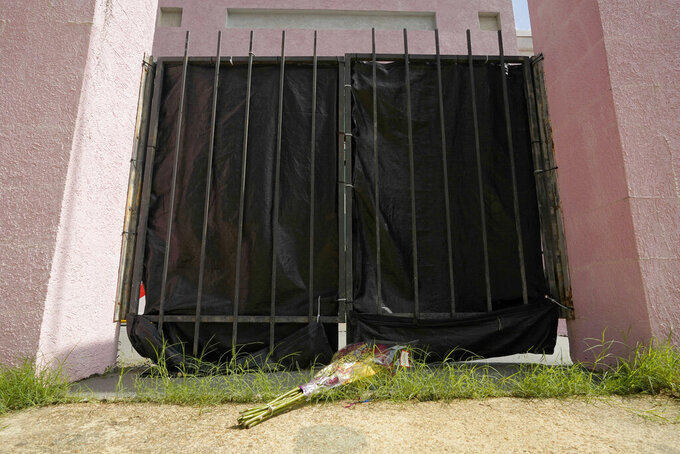 Rogelio V. Solis, ASSOCIATED PRESS
FILE - A bouquet of roses are left by the front gate to the Jackson Women's Health Organization clinic in Jackson, Miss., July 8, 2022. A group of anti-abortion doctors in Mississippi, where state leaders led the charge to overturn Roe v. Wade, say the validity of the state's law banning most abortions remains uncertain. In a lawsuit filed Monday, Nov. 14, 2022 in the Chancery Court of Hinds County, the doctors argue that another legal victory is required to enshrine the ban and protect them from punishment by medical institutions. (AP Photo/Rogelio V. Solis, file)

JACKSON, Miss. (AP) — A group of anti-abortion doctors in Mississippi, where state leaders led the charge to overturn Roe v. Wade, say the validity of the state's law banning most abortions remains uncertain and that further legal action is needed to clarify it and protect them from possible punishment by medical institutions.

The Mississippi Justice Institute makes the claim in a lawsuit it filed Monday on behalf of the American Association of Pro-Life Obstetricians and Gynecologists against the Mississippi State Board of Medical Licensure and its executive director, Dr. Kenneth Cleveland.

The lawsuit argues that when the U.S. Supreme Court issued its ruling in Dobbs v. Jackson Women’s Health Organization, the case that stripped away women’s constitutional protections for abortion, it did not resolve a gray area in state law surrounding abortion rights. Attorneys for the doctors cited a 1998 Mississippi Supreme Court opinion called Pro-Choice Mississippi v. Fordice that holds that abortion is a right protected by the Mississippi Constitution.

Some Mississippi doctors who oppose abortion say the legal uncertainty has placed them in a “Catch-22.” They argue that medical institutions and board certification authorities have issued guidelines suggesting that it is “unethical, and potentially punishable by the government, for physicians who oppose elective abortion to refuse to provide or refer patients” to other doctors for lawful elective abortions. The question of whether elective abortions are “lawful” is unresolved and depends on whether the Mississippi Supreme Court’s opinion in Fordice is still valid, according to the doctors' attorneys.

The organizations did not immediately respond to requests for comment. Cleveland, the head of the medical licensing board, couldn't immediately be reached.

“Rather than focusing on their missions of upholding medical standards, professional medical organizations have sought for years to advocate for pro-abortion political positions," Harrison told The Associated Press. “We hope to finally put an end to those intimidation tactics.”

Leaders of the American Board of Obstetrics and Gynecology, which provides certification to doctors in the field, have said in the past that they do not expect doctors to violate their moral beliefs. But the anti-abortion doctors in this case say those assurances haven't been firm enough.

In a last-ditch attempt to keep the clinic open, attorneys for the Jackson Women's Health Organization made a request to block the state's trigger law from taking effect. They cited Fordice, arguing that the state constitution invokes a right to privacy that “includes an implied right to choose whether or not to have an abortion.” In her brief, Mississippi Attorney General Lynn Fitch wrote that after Roe's reversal, “to the extent that Fordice recognized a right to abortion, it is no longer good law.”

On July 5, a state court judge rejected the clinic's request to block the trigger law. Two days later, most abortions in the state were banned under the law. The clinic formally dropped all its litigation efforts a day after clinic owner Diane Derzis told the AP that she sold the facility and had no intention to reopen it, even if a state court allowed her to do so.

Rob McDuff, an attorney for Mississippi Center of Justice, represented the Jackson clinic in a number of cases, including the Dobbs case. Reached for comment Monday shortly after the lawsuit was filed, he said he was weighing legal options.

“We are going to review this new lawsuit and consider whether it is appropriate for us to seek to intervene,” McDuff said.

The trigger law, passed in 2007, says abortion is legal only if the pregnant woman’s life is in danger or if a pregnancy is caused by a rape reported to law enforcement. It does not have an exception for pregnancies caused by incest. But the validity of the law is uncertain because the Mississippi Supreme Court has not had the opportunity to overrule the 1998 Fordice decision, according to the Mississippi Justice Institute.

A spokesperson for Fitch said the office is reviewing the suit but does not comment on active litigation.

Aaron Rice, executive director of the Mississippi Justice Institute, said this case is the final leg of the anti-abortion movement's legal march toward securing its ban on the procedure. He expects the case will be decided by the Mississippi Supreme Court.

"We intend to finish the job and protect the right to life in the state that took down Roe v. Wade,” Rice said.