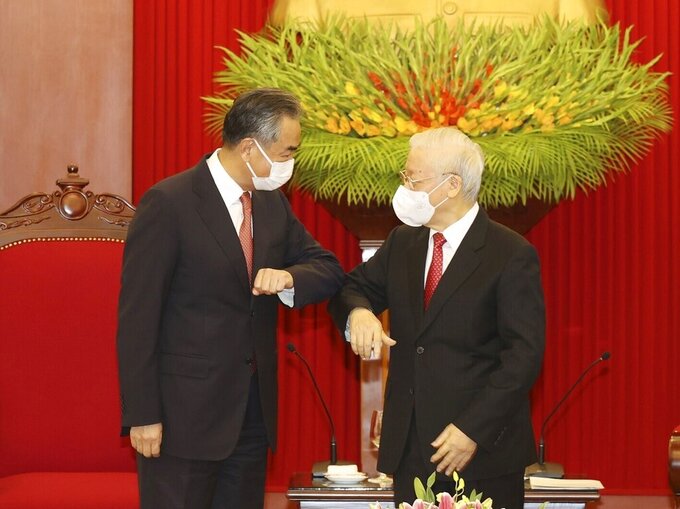 WELLINGTON, New Zealand — New Zealand is buying an extra 500,000 doses of the Pfizer vaccine from Denmark as it tries to keep its coronavirus vaccination program running at full speed, the government said.

The doses are on top of New Zealand’s regular shipments from Pfizer and come a few days after officials announced a similar deal with Spain for more than 250,000 extra doses. New Zealand was slow to get its vaccination program running but has seen demand spike since an outbreak of the delta variant in Auckland last month.

That had left the country in danger of running out of doses ahead of a large scheduled shipment in October. New Zealand’s government has been attempting to eliminate the virus entirely in Auckland by imposing a lockdown but is finding the delta variant hard to stamp out, with another 20 daily community cases reported on Sunday. About 54% of people in New Zealand have had at least one dose and 28% are fully vaccinated.

YUCAIPA, Calif. -- The husband of a California nurse who died of COVID-19 more than two weeks ago has died after battling the disease himself.

A family member told news station KTLA-TV that Daniel Macias of Yucaipa died on Thursday, leaving behind five young children, including a newborn girl. He and his wife, Davy Macias contracted COVID-19 after going on a family trip to the beach and an indoor water park.

They were admitted to the hospital days apart, and it was there that a doctor delivered the couple’s daughter several days before Davy Macias died. Her brother said she was hesitant to get vaccinated because she was pregnant.

Last weekend, the agency was forced to pull vans off the street after a driver in Gilpin County, who contracts Jefferson County’s health agency, drove towards and destroyed signage around the van. Others “verbally abused” staff members Sept. 4.

These types of attacks have been going on for months but they’ve escalated to a higher degree. For instance, last month someone threw live fireworks into a tent of nurses and staff members.

CEDAR RAPIDS, Iowa — Hospitals in Iowa’s second-largest city are limiting elective procedures because of increased numbers of patients driven partly by a surge in COVID-19 admissions.

The Cedar Falls Gazette reports that both UnityPoint Health-St. Luke’s Hospital and Mercy Medical Center confirmed Friday their facilities are preserving capacity because of high patient counts in recent weeks. Cedar Rapids hospitals had not delayed or postponed elective surgeries and procedures since last fall.

St. Luke’s is limiting surgeries that require a hospital stay to 10 per day.

Mercy officials confirmed that it also is temporarily reducing the number of elective procedures that require hospital stays after surgery.

OMAHA, Neb. — Four students are suing Creighton University over its requirement to get vaccinated against COVID-19 to remain enrolled.

They argue that some of them feel pushed to violate their religious beliefs against abortion. The lawsuit filed this week in Douglas County District Court also alleges that some of the four students have medical conditions that make vaccines not recommended for them.

The Catholic university in Omaha mandated that all students get vaccinated in August.

The lawsuit says the students object because vaccines were developed or tested using cells from aborted fetuses.

The Vatican has declared that such vaccines are morally acceptable when others aren’t available. The university declined comment.

The mask requirement applies in Kansas City, Kansas, and to residents aged 5 and older, in businesses and houses of worship. Wyandotte County imposed the mandate in August, and it is now set to remain in place through Nov. 18. The county commission voted this past week to extend the mandate by two months.

The Wichita Eagle reports that 31 companies will receive federal relief funds to keep a total of nearly 4,300 jobs.

LOWVILLE, N.Y. — An upstate New York hospital will stop delivering babies later this month, in part because of employee resignations over a requirement they be vaccinated against COVID-19.

Six maternity staff members resigned from Lewis County General Hospital during the past week, worsening an existing staff shortage, the Watertown Daily Times reported. The department has seven other unvaccinated employees who also could decide to leave, hospital officials said.

“The number of resignations received leaves us no choice but to pause delivering babies at Lewis County General Hospital,” Chief Executive Gerald Cayer said at a news conference Friday. “It is my hope that the (state) Department of Health will work with us in pausing the service rather than closing the maternity department.”

Services also may have to be curtailed in five other departments if staff members resign rather than be vaccinated by the state’s Sept. 27 deadline for health care workers, authorities said.

Cayer said 30 people have resigned since the vaccine mandate was announced last month, most of whom held clinical positions like nurses, therapists and technicians. Thirty others have gotten at least one dose of the vaccine, he said.

“Essential health services are not at risk because of the mandate,” Cayer said. “The mandate ensures we will have a healthy workforce and we are not responsible for (causing COVID-19) transmission in or out of our facilities.”

GARFIELD TOWNSHIP, Mich. — A prosecutor has filed criminal complaints against two northern Michigan men in connection with an attack on a newspaper reporter covering a meeting by a group opposing masks and vaccination mandates.

Record-Eagle education reporter Brendan Quealy said he was punched in the face Aug. 26 while covering an anti-mask event at a public recreation area just outside Traverse City in Garfield Township. Quealy said an event organizer pointed him out and told him to leave.

A Citizens Liberating Michigan organizer can be heard on an audio recording challenging the reporter’s presence and asking attendees to stand in front of him, according to the newspaper.

Quealy told investigators he was attacked when he refused to leave.

The Associated Press was unable to reach Adams or Welsh on Saturday. The AP left messages seeking comment from an attorney listed as representing Adams.

ISTANBUL — Thousands of people protested in Istanbul against COVID-19 restrictions on Saturday.

Unmasked crowds gathered in Maltepe, an open space on the city’s Asian side. A woman in the crowd held a placard that read: “we are born free and we want to live free.”

Turkey’s mask mandate outdoors and in public places remains in place after reopening in July after a lockdown. The country has seen a rise in cases and deaths since then, with daily infections increasing from around 5,000 to more than 20,000.

The state also reported 885 confirmed cases, the largest one-day increase in a week.

That includes 60-year-old Ozzie, the oldest male gorilla in captivity. Zoo Atlanta says employees noticed the gorillas had been coughing, had runny noses and showed changes in appetite.

A veterinary lab at the University of Georgia returned positive tests for the respiratory illness. Zoo Atlanta says it’s waiting on confirmation from the National Veterinary Services Lab in Iowa. The zoo says it I s treating the gorillas at risk of complications with monoclonal antibodies.

Zoo officials say they believe an asymptomatic employee passed on the virus. The employee had been fully vaccinated and was wearing protective equipment.

The Chinese Foreign Minister Wang Yi made the pledge Saturday as he wrapped up a two-day visit to Hanoi. The visit comes amid a virus lockdown in Vietnam to contain a coronavirus surge.

About 23 million Vietnamese students started a new school year this week, most in virtual classrooms.

There were 3,355 cases and 36 deaths on Saturday, according to the Department of Health Services’ coronavirus dashboard.

WASHINGTON — President Joe Biden’s administration is gearing up for another major clash between federal and state rule over its sweeping new vaccine requirements that have Republican governors threatening lawsuits.

While many details about the rules remain unknown, some experts say Biden appears to be on firm legal ground to issue the directive in the name of protecting employee safety.

Republicans swiftly denounced the vaccine mandate that could impact million Americans as government overreach and vowed to sue.

There are now about 300% more daily infections, two-and-a-half times the hospitalizations and nearly twice the deaths as the same time last year – before vaccines were available.

CHALMETTE, La. — Some of the hardest-hit victims left in deadly Hurricane Ida’s wake are Louisiana residents already devastated by the pandemic. Many impoverished people, especially those of color, already lost livelihoods.

They were on the brink before Ida and don’t know how they’ll rebound. One such woman is Natasha Blunt. She lost her banquet-hall job and faced eviction. She’s suffered strokes. She moved from New Orleans to an apartment a few miles away and was getting settled when Ida hit.

Her home lost power; belongings were destroyed. Now she faces eviction again. She wants to leave Louisiana but doesn’t have the means. Advocates try to help Blunt and others like her but say it’s an uphill battle and systemic change is needed.

Many football stadiums aren’t requiring fans to wear masks or be vaccinated. The chances of a fan being exposed will depend on where the stadium is and whether the game is outdoors, among other factors. Experts say the single biggest way to manage the risk before attending a game is to get fully vaccinated.

“At any sort of large event like at a football stadium, without question there will be many infected people there,” said Ryan Demmer epidemiologist at the University of Minnesota School of Public Health.

The highly contagious delta variant has triggered a summer surge in infections. The seven-day rolling average for daily cases in the U.S. sits at about 150,000 after starting September above 167,000, according to Johns Hopkins University.

NAIROBI, Kenya -- Plans for COVID-19 booster shots in some Western countries are highlighting vast disparities in access to vaccines around the world.

Wealthier nations are awash in vaccines, while they are scarce in poorer countries, and many people are still waiting for their first shot.

Just over 3% of people across Africa have been fully vaccinated. Health officials and citizens in Africa often have little idea if vaccines will be available from one day to the next.

In Nairobi, Kenya, several hundred people line up daily outside the city’s largest hospital to wait for a shot. Halfway around the world in Atlanta, a clinic had only one person show up over a six-hour period Wednesday to get vaccinated.

The disparity comes as the U.S. is moving closer to offering booster shots to large segments of the population even as it struggles to persuade Americans to get vaccinated. About 53% of the U.S. population is vaccinated.

Margaret Herro, the Georgia director of relief organization CORE, says the group has seen an uptick in vaccinations at its pop-up sites in recent weeks amid the delta case surge and the FDA’s full approval of the Pfizer vaccine.

MONTGOMERY, Ala. — Alabama’s chief health officer says a surge in COVID-19 hospitalizations appears to have stabilized but the state still faces a “real crisis” of an overwhelming number of patients needing intensive care, nearly all of whom aren’t vaccinated.

Dr. Scott Harris, head of the Alabama Department of Public Health reports that after threatening to reach an all-time high for coronavirus hospitalizations, state hospitals have seen a slight decline in recent days.

He says he’s thankful that there has been “a little bit of a plateau over the last week. ... The numbers aren’t great. But the numbers at least have not continued to go up,” he said.

Still, Harris says, demand for intensive care beds is exceeding the state’s capacity. Patients who normally would be treated in ICU wards are instead in emergency rooms, normal beds or even gurneys left in hallways.