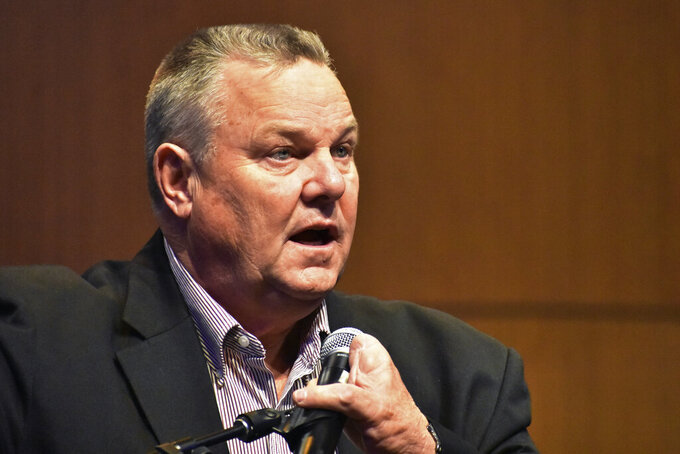 Matthew Brown, ASSOCIATED PRESS
U.S. Sen. Jon Tester is seen speaking during a Veterans Day ceremony at Lockwood High School, on Nov. 11, 2022, in Lockwood, Montana. Tester's third term ends in 2024 and Republicans are eager to challenge him following a string of GOP victories in the state. (AP Photo/Matthew Brown)

LOCKWOOD, Mont. (AP) — Republicans emboldened by a string of electoral victories in Montana this midterm election are quickly turning their attention to a prize that has repeatedly eluded them: the U.S. Senate seat held by three-term Democrat Jon Tester that is up for grabs in 2024.

Zinke, 61, told The Associated Press Thursday he considers Tester vulnerable, and he will make a decision on whether to seek the Senate seat next year. Rosendale, 62, said Tester doesn’t represent Montana’s interests and should be replaced, but he declined to answer when asked if he will run.

Tester is expected to be among the most vulnerable Democrats in the U.S. Senate in the next election cycle along with fellow moderates Joe Manchin of West Virginia and Kyrsten Sinema of Arizona. Voters in Montana and West Virginia have increasingly trended Republican, while Arizona has become a key swing state targeted by both parties.

If Tester, 66, decides not to run for reelection, that would give Republicans a huge advantage because there are few Democrats in the state with his high profile.

Following a Veterans Day ceremony at Lockwood High School near Billings Friday, Tester said that he plans to make a determination on his re-election bid early next year.

“I’m going to make this decision based on my effectiveness and my family,” he said in a brief interview. “Part of the decision on whether to run again is I’m going to be in a position where I can really influence, and that’s pretty cool.”

It remains unknown who will control the Senate next year with Georgia's contest headed for a runoff and a race in Nevada still undecided. But the chamber is certain to be closely divided headed into the next election.

Regardless of who wins the GOP nomination in Montana — whether Rosendale, Zinke or someone else with statewide name recognition such as Gov. Greg Gianforte — Tester will be in a tough situation in 2024, University of Montana political analyst Christopher Muste said.

Montana Democrats over the past decade lost every other statewide partisan office they once held except for Tester's, including governor, Montana's second U.S. Senate seat and other leading posts.

“Montana Republicans will be encouraged” by their Tuesday wins, Muste said. “Tester's got to ask himself if he wants to take that challenge on, though in the past he's seemed to revel taking it on.”

Tester entered the Senate in 2006 with a razor-thin victory of about 3,500 votes over three-term incumbent Republican Conrad Burns. His second election in 2012 also was close, over former U.S. Rep. Denny Rehberg.

Rosendale, a hard-right conservative, tried to unseat Tester in 2018 but narrowly lost, despite repeated appearances in Montana on the Republican's behalf by former President Donald Trump. Trump bore a personal grudge against Tester after the Democrat derailed Trump’s Veterans Affairs nominee with revelations of misconduct.

Zinke and Rosendale faced off previously in the 2014 GOP U.S. House primary. Zinke narrowly prevailed in that five-way race and was elected twice to the House. He left soon after his second election to join Trump's cabinet for less than two years before resigning amid numerous ethics investigations.

After narrowly winning the 2022 Republican primary, Zinke used most of his campaign cash — more than $6 million — to fend off a challenge from Missoula attorney Monica Tranel. Rosendale cruised to a second term and had more than $1 million in cash remaining as of Oct. 19.

Tester has raised $4 million in campaign cash since his 2018 re-election and has about $2.5 million remaining.

Those amounts are dwarfed by the sums spent during Republicans’ prior to attempts to unseat Tester.

Both Rosendale and Zinke have proven to be strong fundraisers. Gianforte is immensely wealthy and in 2020 loaned his gubernatorial campaign more than $7.5 million to vastly outspend his Democratic rival.

A spokesperson for Gianforte, whose first term ends in early 2025, declined to say if he had interest in the Senate position. Spokesperson Brooke Stroyke said the governor was focused on upcoming issues in the 2023 Legislative session.

Zinke criticized Tester for not standing up to his party in the same manner as Manchin, who got fellow Democrats to scale back proposed restrictions on the energy industry.

“He could have slowed the progressive wave,” Zinke said. “He chose not to.”

Tester said he was comfortable supporting last year's infrastructure bill and the Biden administration's climate change legislation, and a spokesperson said Tester supports an “all of the above” energy strategy. Tester serves as chair of the Veterans' Affairs Committee, where he sponsored legislation signed into law in August that expanded federal health care services for millions of service members exposed to toxic smoke from “burn pits” at military bases.

“The default position for most people in Montana is they vote Republican unless you give them a reason to vote for you," he said. “I can't be anybody else but me.”