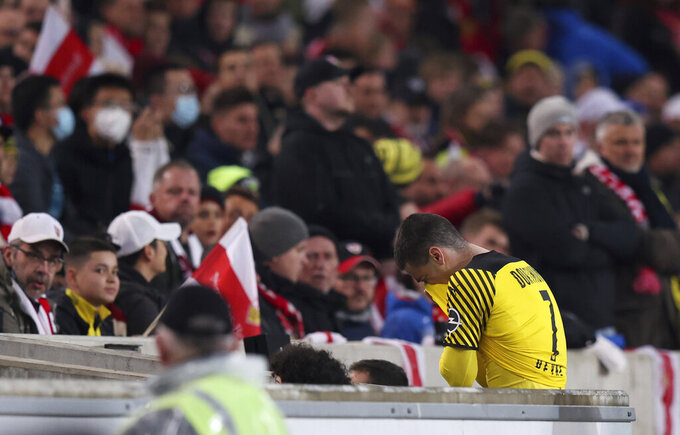 American midfielder Gio Reyna will miss the rest of the Bundesliga season.

The 19-year-old sustained a muscle and tendon injury just after kickoff of Borussia Dortmund's game against Stuttgart on Friday night, and he left the field in tears in the second minute.

Dortmund said Sunday that Reyna will not play during the rest of the season, which ends on May 15. The 2022-23 season starts Aug. 5.

He injured his right hamstring in the United States’ opening World Cup qualifier at El Salvador on Sept. 2. He didn’t return to the field until Feb. 6, then in his third game back hurt a leg and was out until March 13.

Reyna played his first full match since summer for Dortmund on March 20, reported back to the U.S. team and made three second-half appearances in World Cup qualifiers from March 24-30 for a total of 106 minutes.

He played the final 17 minutes at RB Leipzig on April 2, then got hurt Friday.

U.S. coach Gregg Berhalter will gather his players for exhibitions on June 1 and 5 followed by CONCACAF Nations League matches against Grenada on June 11 and at El Salvador three days later.

The U.S. is planning friendlies for Sept. 23 and 27 ahead of its World Cup opener against Scotland, Wales or Ukraine on Nov. 21.