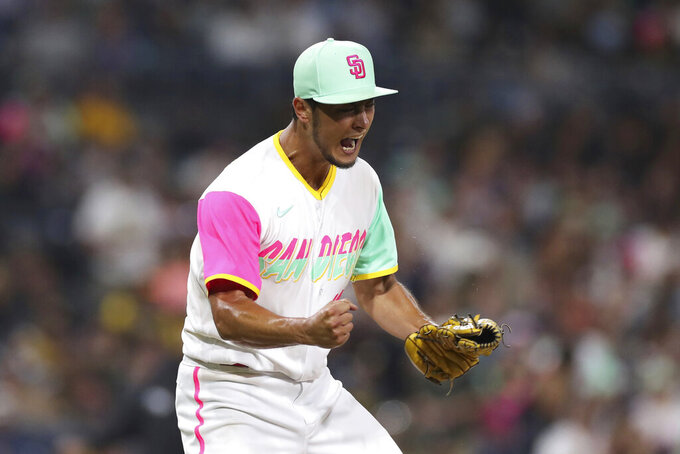 “He was terrific,” San Diego manager Bob Melvin said. “You want somebody who's going to go out there and not worry about pitch counts and try and give you seven innings and give our bullpen a little bit of a break.”

Darvish's batterymate, Austin Nola, hit an early two-run double to help the Padres win for only the second time in seven games.

“Austin is starting to swing the bat better,” Melvin said. “There is more in there offensively, and I think he will be the first to tell you that, especially against left-handed pitching.”

Ketel Marte had three hits and scored twice for the Diamondbacks, including a solo homer to center field off Darvish (8-4) in the first inning.

San Diego answered with three runs off Madison Bumgarner (5-9) in the second. Nola drove in two with a double down the left-field line and scored from third on Esteury Ruiz's single two batters later.

Darvish took it from there.

“Obviously I gave up that home run, but me and Nola decided to stick with the game plan. The ball was moving pretty good for me. All in all it was a pretty good outing,” Darvish said through a translator. “The harder cutter was good and also the slider was working pretty good.”

The Padres added two runs in the third on an RBI single by Ha-Seong Kim and Nola's double-play grounder.

Christian Walker smashed a long two-run homer after Marte singled in the fourth, making it 5-3. Darvish then buckled down and held the Diamondbacks scoreless for the rest of his outing.

“He was having a lot of fun out there,” Nola said. “He was mixing his pitches and seeing what hitters were doing and making adjustments inning by inning."

Darvish allowed five hits and walked two. Taylor Rogers retired the side in order in the ninth for his 25th save, second-most in the majors.

Diamondbacks: RHP Ian Kennedy (blood clot in right calf) is expected to return right after the All-Star break. A recent ultrasound showed the clot had dissolved, and Kennedy is expected to pitch in an Arizona Complex League game Saturday.

Padres: SS Fernando Tatis Jr. was cleared to begin his swinging progression, and he started it Friday afternoon at Petco Park with light work off a tee, Melvin said. However, the Padres have not given a projected return date to game action. Tatis underwent surgery to repair the scaphoid bone in his left wrist on March 16. At the time, the team offered a three-month timetable. ... OF Jurickson Profar and RHP Steven Wilson were activated from the injured list. Profar was back in the leadoff spot after he sustained a concussion and a cervical sprain in a scary collision with infielder C.J. Abrams last week. Wilson rejoined the bullpen after recovering from a left hamstring injury. OF José Azocar and RHP Tayler Scott were optioned to Triple-A El Paso.