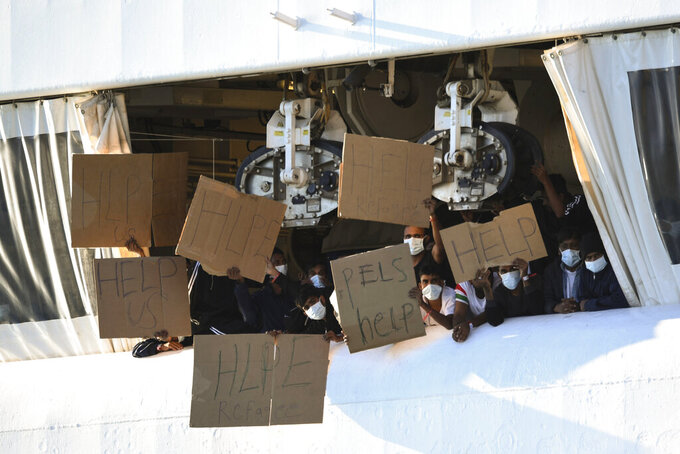 Salvatore Cavalli, ASSOCIATED PRESS
Migrants hold banners asking for help, from a deck of the Norway-flagged Geo Barents ship operated by Doctors Without Borders, in Catania's port, Sicily, southern Italy, Monday, Oct. 7, 2022. The Geo Barents has been allowed Sunday to disembark 357 migrant that Italian authorities defined as "vulnerable people" and minors, while leaving another 215 people that were declared non-vulnerable blocked on board. (AP Photo/Salvatore Cavalli)

MILAN (AP) — After waiting at sea for days, the German humanitarian group Mission Lifeline said Monday that Italy has directed its migrant rescue ship with 89 people on board to proceed to the port of Reggio Calabria.

The 25-meter (80-foot) ship Rise Above entered Italian waters over the weekend without consent because of storm-swollen seas, after rescuing 95 people in the central Mediterranean. Six were evacuated at sea due to medical emergencies.

"We are relieved that waiting on the high seas is over. The situation on board has become more and more critical in the past few days and hours," Mission Lifeline spokeswoman Hermine Poschmann said. “We expect that the Italian authorities give everyone access to a legally compliant asylum procedure and that people do not have to stay on our ship any longer than necessary.”

Italy has refused to assign migrant rescue ships with a port of safety as it takes a hard line with nongovernmental organizations operating in the central Mediterranean. Instead, it has been instructing them to ports, where authorities allow only vulnerable people to disembark. Italian authorities insist the boats must then return to international waters with those not deemed vulnerable.

The far-right-led government of Premier Giorgia Meloni is insisting that countries whose flag the ships fly take on the migrants, and that the burden shouldn't fall on Italy alone.

Poschmann said that Mission Lifeline has asked Germany to take in more people.

Two other NGO-run boats are docked in Catania, one with 35 people that Italy won't allow to disembark, the other with 214 people. Both ships are refusing to leave, saying that under international law all people rescued at sea are vulnerable and entitled to a safe port.

A fourth ship, the Ocean Viking operated by SOS Mediterannee, remains in international waters off Sicily with 234 rescued people. Its first rescue was 17 days ago.