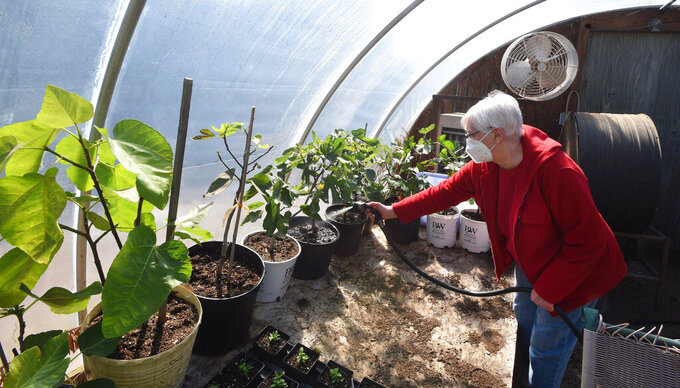 Jack Hanrahan, ASSOCIATED PRESS
Mary Picardo of Millcreek Township, Pa., waters fig plants in her backyard greenhouse on March 19, 2021. Gus and Mary Picardo have been eating their own homegrown lettuce since February. By mid-March, they had tomatoes growing on more than four dozen healthy plants. Their fig trees were bearing fruit while most of the region’s figs were still buried to protect them from the cold. (Jack Hanrahan/Erie Times-News via AP)

ERIE, Pa. (AP) — Gus and Mary Picardo have been eating their own homegrown lettuce since February.

By mid-March, they had tomatoes growing on more than four dozen healthy plants. Their fig trees were bearing fruit while most of the region’s figs were still buried to protect them from the cold. And their perennials and annuals grew stoutly from seed even when temperatures dropped below freezing.

The Millcreek Township couple got a head start on their garden when they stayed home because of the COVID-19 pandemic. They generally spend three months each winter in Florida.

Gus Picardo cares for the plants in his backyard greenhouse in Millcreek Township on March 19.

This year they fired up the furnace in the 18-by-48-foot greenhouse in the backyard of their West Ridge Road home just after Christmas.

“I’m used to being in Florida and golfing and enjoying the outdoors,” Gus Picardo said. “I’m not one to sit around the house all winter and do nothing. I’d go nuts. This gave me something to do.”

And the greenhouse has a feel of Florida, Mary Picardo said.

“When it was cold and snowing outside, it was good to be in the greenhouse with plants growing,” she said.

The furnace in the greenhouse is set to 60 degrees, but even in winter the sun can boost the temperature much higher.

“We have to open the door sometimes or else we’d have condensation dripping from the ceiling,” Gus Picardo said.

The cost to heat the greenhouse is about $150 a month.

“It’s cheaper than going to Florida,” he said.

“I love flowers. Flowers don’t talk back to you. I used to tell my kids that,” Mary Picardo said.

Greenhouse plants will be moved outdoors to continue growing as Erie weather permits. And the couple’s vast garden this summer will include even more homegrown goodies, including 900 garlic plants in 12 varieties, 500 onions, peppers, eggplants and lots of berries, including blackberries, raspberries, black raspberries and strawberries.

“I added elderberries because I love elderberry pie,” Gus Picardo said. “And Mary is a great baker.”

In-ground nozzles will water the plants as needed.

Their grandson helps out by picking bugs.

“We don’t spray. Everything is organic now,” Gus Picardo said.

Other pickings, of fresh vegetables and flowers, will go to family and friends, a local school, Mary Picardo’s garden club and others. The Picardos also have four freezers to preserve the tastes of summer all year.

“I love to see the fruit of my labors,” Gus Picardo said.

They even grow plants they didn’t intend to grow, including a cherry tomato plant that grew up in the floor of their greenhouse, spread across an entire table and produced prolifically until it was pulled to make room for other plantings in February.

The Picardo family has farmed the property near Colonial Avenue since 1956 when Gus Picardo’s family bought it.

“My dad was the farmer,” Gus Picardo said. “My brother and I took over later.”

The family sold what they grew at a stand in front of the house for 25 years, until June 2000.

“I taught school most of the year and farmed in the summer,” Gus Picardo said. He is retired from the Erie School District, where he also coordinated athletics and the Academic Sports League.

Mary Picardo is a homemaker.

As much fun as they had in their greenhouse this past winter, the Picardos plan to return next winter to their normal routine of planting in late March.

“Are we going to Florida next year?” Gus Picardo said. “Oh, yeah.”