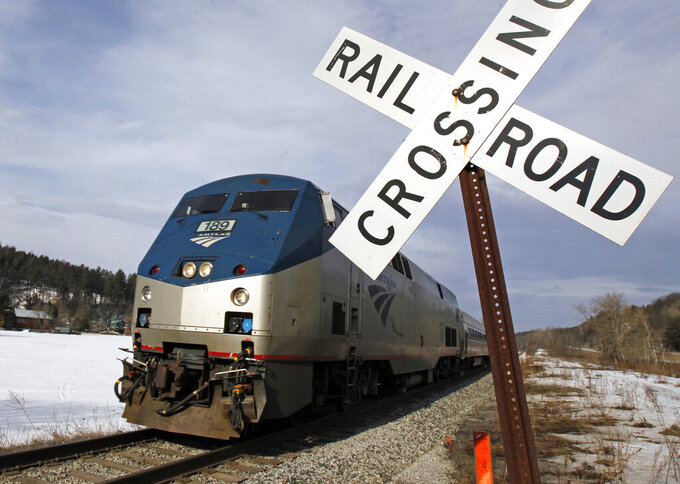 Toby Talbot, ASSOCIATED PRESS
FILE - The Amtrak Vermonter heads down the track in Berlin, Vt., March 11, 2013. On Tuesday, April 5, 2022, Vermont Transportation Agency officials are spreading the word about rail safety after a series of near misses between people walking on the railroad tracks and Amtrak trains that are taking practice runs ahead of resuming service in the summer between Rutland and Burlington. (AP Photo/Toby Talbot, File)

The Transportation Agency’s Toni Clithero made the comments Tuesday, a day after there were two close calls between Amtrak trains and people walking along the active tracks, in West Rutland and Brandon.

In the West Rutland case, a couple was walking their dog and barely escaped being hit by the train. The crew had been unable to stop. It can take the trains up to a mile (1.6 kilometers) to halt.

“These people and their dog just got out of the way at the last second,” said Clithero, who focuses on rail safety for the Transportation Agency. “The crew didn’t know whether it hit anyone. So this was absolutely terrifying.”

In the second case on Monday in Brandon, a teenage boy who was also walking a dog, was spotted by an employee of the Vermont Rail System, which leases from the state the tracks that will be used by Amtrak when service resumes this summer, Clithero said.

Last month a group of young people was seen on the tracks in Shelburne.

Train crews conducting the test runs can reach 59 mph (95 kph) — the maximum speed that will be used when the train is carrying passengers on the route.

Clithero said the diesel electric Amtrak trains run on continuously welded steel rails and and the “whooshing sound” is behind the engine, not in front of it.

“It could sound like wind blowing through the leaves of a tree,” she said. “By the time you hear it, it's probably going to be too late.”

Amtrak said officials, including the Amtrak Police Department, are hosting presentations at schools and other locations to share rail safety messages ahead of the resumption of Amtrak service between Burlington and Rutland, according to a written statement Tuesday.

The Vermont Transportation Agency has been working for years to upgrade the tracks and other rail infrastructure on the 75 miles (120 kilometers) of rail between Burlington and Rutland.

Amtrak is due to begin service this summer between Burlington and New York, via Rutland on the Ethan Allen Express. In addition to Burlington, the train will stop in Vergennes and Middlebury.

The Ethan Allen Express has run between New York and Rutland for years.