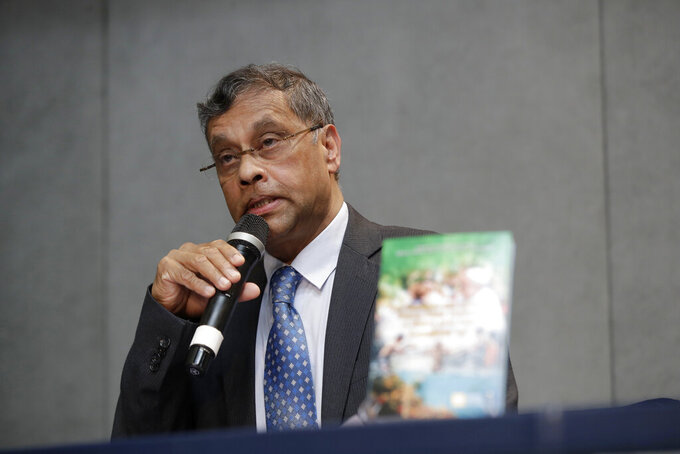 Alessandra Tarantino, ASSOCIATED PRESS
FILE - Aloysius John, Secretary General of Caritas International, speaks during a press conference to present a document on the 5th anniversary of Pope Francis' encyclical "Laudato si" (Praise Be) calling on the world to act to stop the human destruction of the planet, at the Vatican's press room, Thursday, June 18, 2020. Pope Francis on Tuesday, Nov. 22, 2022 ousted Aloysius John and appointed temporary leadership after an external review found management and morale problems at its head office. (AP Photo/Alessandra Tarantino, File)

A Vatican statement said the review found no evidence of financial mismanagement or sexual impropriety. But it said other issues did emerge, with “real deficiencies” found in management, “seriously prejudicing team spirit and staff morale.”

Ousted was the secretary general of Caritas Internationalis, Aloysius John, who was elected in a contested vote in 2019, as well as the leadership and governance team. The changes do not affect the leadership of any of the 162 national development and relief organizations that make up the Caritas global confederation.

Caritas Internationalis is one of the Holy See's main charity organizations and acts as the global umbrella for national and regional federations that operate in more than 200 countries. The Rome-based secretariat reported income of some 5.1 million euros ($5.2 million) in 2020 and expenditures of 4.4 million euros, according to the annual statement.

John, an Indian native, had been brought into the Caritas Internationalis' management structure as head of development in 2013 by its previous secretary general, Michele Roy, from the French Caritas federation, known as Secours Catholique. When Roy's term ended, John ran for the position of secretary general and won after other initial candidates dropped out, and after initially failing to win a majority of votes.

A former Caritas employee who cooperated with the external reviewers said he recounted instances of bullying and incompetence under John, especially in the handling of the fallout of a sex abuse scandal in the Caritas' operations in Central African Republic. The former employee spoke on condition of anonymity, citing a fear of retaliation.

In late 2019, in response to a CNN investigation, Roy admitted he had learned in 2017 of pedophilia concerns about the director of the Bangui Caritas operations, but left it to the priest's immediate superiors to investigate. They did not, and CNN identified at least two child victims while the priest was in the country.

Francis named as temporary administrator of Caritas Internationalis Pier Francesco Pinelli, an organizational consultant who had participated in the external review and will lead the organization until new elections for a secretary general are held in 2023. The current head of advocacy, Maria Amparo Alonso Escobar, stays on and Francis appointed a Jesuit priest to help with the “personal and spiritual accompaniment of the staff.”

Caritas' current president, Cardinal Luis Antonio Tagle, who heads the Vatican’s evangelization department, will remain on to work under the new temporary administrators, the statement said.

Pinelli had taken part in a 2021 evaluation of the Vatican's development office, which resulted in a shakeup of the leadership team there and the appointment of Cardinal Michael Czerny, a top Francis ally, as prefect. Caritas Internationalis is part of the development office.

In a statement Tuesday, the development office said the review of Caritas was undertaken to asses the secretariat office's “alignment with Catholic values of human dignity and respect for each person.”

Czerny said the changes should enable Caritas to meet the challenges of serving the “least and the suffering” but also to make sure that it does so making sure the organization “proves equal to its mission.”