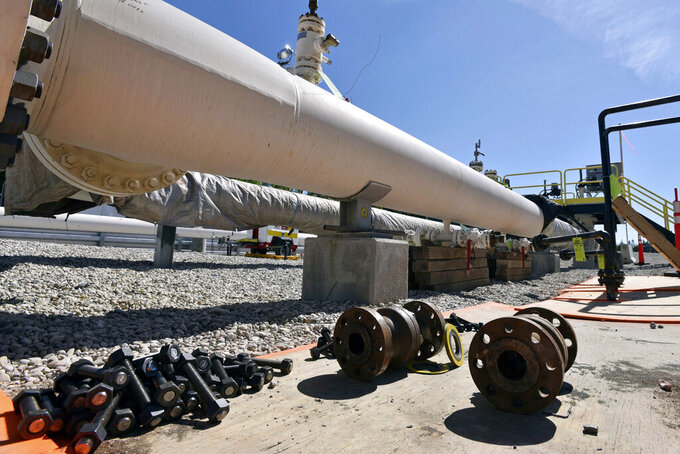 Dale G. Young, ASSOCIATED PRESS
FILE - Nuts, bolts and fittings are ready to be added to the east leg of the pipeline near St. Ignace, Mich., as Enbridge Inc., prepares to test the east and west sides of the Line 5 pipeline under the Straits of Mackinac in Mackinaw City, Mich., June 8, 2017. A federal judge Thursday, Aug. 18, 2022, kept jurisdiction over a lawsuit seeking to close the oil pipeline crossing a section of the Great Lakes, rejecting Michigan's effort to shift the case to state court. (Dale G Young/Detroit News via AP, File)

TRAVERSE CITY, Mich. (AP) — A federal judge Thursday kept jurisdiction over a lawsuit seeking to close an oil pipeline crossing a section of the Great Lakes, rejecting Michigan's effort to shift the case to state court.

U.S. District Judge Janet Neff sided a second time with Enbridge Energy, which contends regulation of its Line 5 is a federal matter and federal courts should handle legal arguments about whether it should continue operating.

“The Court reinforces the importance of a federal forum in deciding the disputed and substantial federal issues at stake, with uniformity and consistency,” Neff said in a written decision.

Line 5 is part of a network that moves Canadian oil and natural gas liquids used in propane to refineries in both nations. It extends 645 miles (1,038 kilometers) between Superior, Wisconsin, and Sarnia, Ontario, crossing northern Wisconsin and Michigan's Upper Peninsula.

Whitmer and Nessel, both Democrats, agree with environmental groups and Indigenous tribes that a 4-mile (6.4-kilometer) segment beneath the Straits of Mackinac poses an unacceptable spill risk to the waterway linking Lake Huron and Lake Michigan. The governor demanded a shutdown in 2020, which the company, based in Calgary, Alberta, has rejected.

Enbridge is backed by the Canadian government, which invoked a 1977 treaty with the U.S. guaranteeing cross-border flow of oil and natural gas. The Biden administration is discussing the matter with Canadian officials.

Whitmer dropped her case after Neff retained jurisdiction. Now pending before the judge are Nessel's suit and another filed by Enbridge to have the governor’s shutdown order dismissed.

Nessel is challenging a 1953 easement granted by Michigan to run a section of the pipeline across state-owned bottomlands, saying it violates common-law “public trust” doctrine requiring the state to protect Great Lakes waters.

Neff's ruling criticized the attorney general for repeating arguments in favor of applying state law that the judge had rejected previously. It would be “absurd” to have one Line 5 case in state court and another in federal court, she said, accusing Nessel's team of “gamesmanship ... procedural fencing and forum manipulation."

Nessel “remains steadfast in her commitment to protect Michigan's natural resources from the potentially devastating impact of environmental disaster,” McCann said. “The department strongly disagrees with the judge's mistaken characterization of both the law and the attorney general's approach to this and related cases.”

The judge's decision “unfortunately prevents the state court from hearing the merits of the case,” said Mike Shriberg, director of the National Wildlife Federation's regional office. “While we disagree with the ruling, it doesn’t change that fact that Line 5 is a ticking time bomb for the Great Lakes and needs to be shut down immediately.”

Enbridge insists the underwater segment of Line 5, which consists of two parallel pipes, is in sound condition but wants to replace it with a new pipe that would be housed in an underground tunnel to be drilled beneath the straits. The company is applying for state and federal permits.

The U.S. Army Corps of Engineers is developing an environmental impact study of the proposal, which could last several years. The Corps on Monday announced a 60-day comment period, with Lt. Col. Brett Boyle, commander of the Detroit District, promising an "open, transparent and public” process.