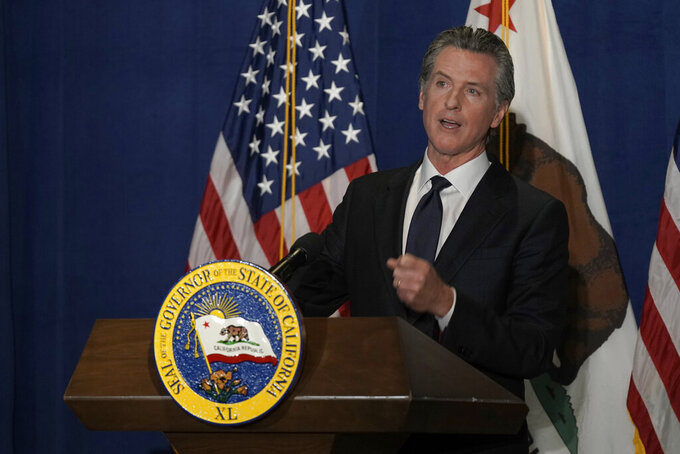 Those are among the proposals the Democratic governor has delivered to lawmakers as they work to hash out how to spend $19.3 billion set aside for climate in the state budget. He also wants to establish a permitting policy for projects that would remove carbon dioxide from the air and put into law the state's 2045 carbon neutrality goal as well as a ban on new oil wells within 3,200 feet (975 meters) of homes and schools.

“The ambition of California’s climate goals must match the urgency and scale of the climate crisis,” the Newsom administration wrote in a document distributed to state lawmakers that was obtained by The Associated Press. “Increasing ambition in the near-term supports the unprecedented rate of transformation needed in this decade to build the clean energy systems of tomorrow.”

The proposal would be part of the state’s $300 billion state budget. Lawmakers passed the budget earlier this year without figuring out how to spend the climate money. Newsom and state legislative leaders have until the end of August to reach a deal.

Assembly Speaker Anthony Rendon, a Democrat from Lakewood, noted the Assembly previously approved bills that would do much of what Newsom wants — including making the carbon-neutral goal a law and setting a goal for nature-based carbon removal of emissions.

“I would say that I more than support such efforts,” Rendon said in a statement. “I agree with the Governor that California absolutely must take more of the same kind of actions that the Assembly has been working on.”

Brian Dahle, a Republican state senator and Newsom's opponent in the November election, said he thinks the governor's plan is misplaced. He said California should be spending money to thin overgrown forests, which too easily catch fire and release lots of carbon into the atmosphere.

“Put everything on the table and let's reduce carbon,” he said. “He's going to set a goal and (the Legislature) are probably going to pass that goal, and he's going to take a victory lap and say ‘I’ve saved everybody in the world' and nothing has changed."

California already has some of the nation's most ambitious goals for weening off of fossil fuels by transitioning to electric cars and home appliances. State air quality officials have already either adopted or proposed a number of new rules to reach those goals, including banning the sale of new gas-powered lawn equipment, banning the sale of new gas-powered passenger vehicles by 2035 and requiring all of California’s electricity to come from renewable sources — like solar and wind — by 2045.

Newsom's proposal goes even further. The state, for example, is required to make sure its greenhouse gas emissions are 40% less than 1990 levels by the year 2030. Newsom wants to change that to a 55% reduction. State leaders have promised to make the state “carbon neutral” by 2045, meaning it would remove as much carbon dioxide from the air as it emits. Newsom's proposal would turn that from a goal into a law.

Setting more ambitious goals is a good start, but ensuring they are implemented is more important, said Danny Cullenward, a lawyer and economist who focuses on California climate policy and sits on a panel that oversees the state's cap-and-trade program. He was particularly skeptical about the increase in the 2030 emissions reduction goal, as many observers believe the state is not on path to meet the more modest existing targets.

“If this provides an opportunity to have an honest conversation about implementation, it's unambiguously positive," he said. “But I worry we haven't been having that conversation.”

Still, he said he's excited about Newsom's proposal to set near-term targets for ensuring more of the state's electricity comes from renewable and non-carbon sources. It wouldn't change the state's requirement that 100% of its electricity for retail sales is zero-emission by 2045, but it would set interim benchmarks to make sure the state is scaling up solar and wind projects more quickly.

Renewable electricity is better for the environment, but it isn’t as reliable as traditional power sources like burning coal and natural gas. Solar and wind power depend on the weather and the state doesn't have enough batteries to store excess energy for use at night. The state’s hydropower plants have been hurt by a severe drought that has shrunk the state’s reservoirs.

Two years ago, California ran out of power during an extreme heat event, prompting rolling blackouts that hit hundreds of thousands of customers.

Newsom has vowed not to let that happen again. He said his plan would maintain reliability while keeping people’s electricity bills affordable. Both goals will be a challenge. Newsom has already signaled a willingness to tap fossil fuel-powered energy sources to avoid blackouts if necessary during the hot summer months. Meanwhile, California’s electricity rates are already among the highest in the nation.

“Meeting our goals of 100% clean electricity by 2045 is still the key component in fighting climate change and in preventing these weather conditions in the first place," said State Sen. Josh Becker, a Democrat and chair of the Senate Energy, Utilities and Communications Subcommittee on Clean Energy Future.

Newsom also wants a new state law to make sure new oil and gas wells in California are not within 3,200 feet (975 meters) of homes, schools, parks and other community sites. The state’s oil and gas regulator proposed the same setback distance last October, but it is not yet law.