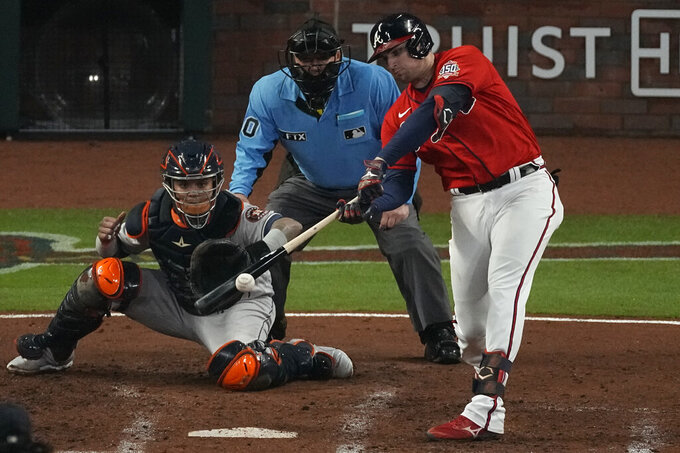 ATLANTA (AP) — Austin Riley keeps coming up with one clutch hit after another on baseball’s biggest stage.

Riley drove in the first run of the Braves' 2-0 victory over the Houston Astros in Game 3 of the World Series on a damp Friday night in Atlanta.

The Braves are now up 2-1 in the series, two wins away from their first championship since 1995.

Their burly third baseman is a huge reason why.

After a breakout year in 2021 that sparks chants of “MVP! MVP! MVP!” from Atlanta fans when he comes to the plate, Riley has carried his regular-season success right to the postseason.

He's tried to maintain the same approach that worked all year.

“You get into the postseason, and I feel like a lot of people want to change a little bit, trying to do a little extra, a little extra,” said Riley, who hit .303 with 33 homers and 107 RBIs in his first full year as a starter. “I just try to keep it as simple as possible.”

Riley provided the only offense that would be needed on a night when Ian Anderson and four relievers did not allow a hit until the eighth inning.

With one out and two runners aboard, Riley yanked one down the third-base line for a double that sent Eddie Rosario scooting home.

“I think just sticking with my work that I do in the cage and doing my homework against the pitcher ... keep my approach through the middle," Riley said. “And I think that was the reason why I was able to stay on that slider right there.”

Travis d'Arnaud provided some insurance with a mammoth homer over the center-field wall in the eighth, but it's impossible to ignore Riley's impact on the Atlanta lineup.

He may be batting just .236 (13 of 55) in the postseason, but almost every one of those hits has been significant. He has two homers and seven RBIs.

During the NL Division Series against the Milwaukee Brewers, Riley went 5 of 15 with a homer to help the Braves advance to face the 106-win Los Angeles Dodgers, the reigning champs and the team that sent Atlanta packing in 2020.

Not with Riley in the middle of things.

He won Game 1 with a walk-off hit in the ninth. In the Game 6 clincher, Riley put the Braves ahead with a two-out RBI double in the first, yet another consequential hit that was overshadowed by Rosario’s MVP-winning performance.

Riley is at it again in the World Series.

In Game 1 at Houston, he doubled in a run in the first inning to help spark a 6-2 victory.

On Friday, he jumped on the slider from rookie Luis Garcia, smoking it just inside the third-base bag — a major blow in the first nail-biting game of the series.

The big hits just keep on coming for the 24-year-old cleanup batter.

He knows a few more are needed to capture the ultimate prize.

“There’s still some unfinished business,” Riley said. “I know they'll bring it tomorrow, and we can get back after it.”