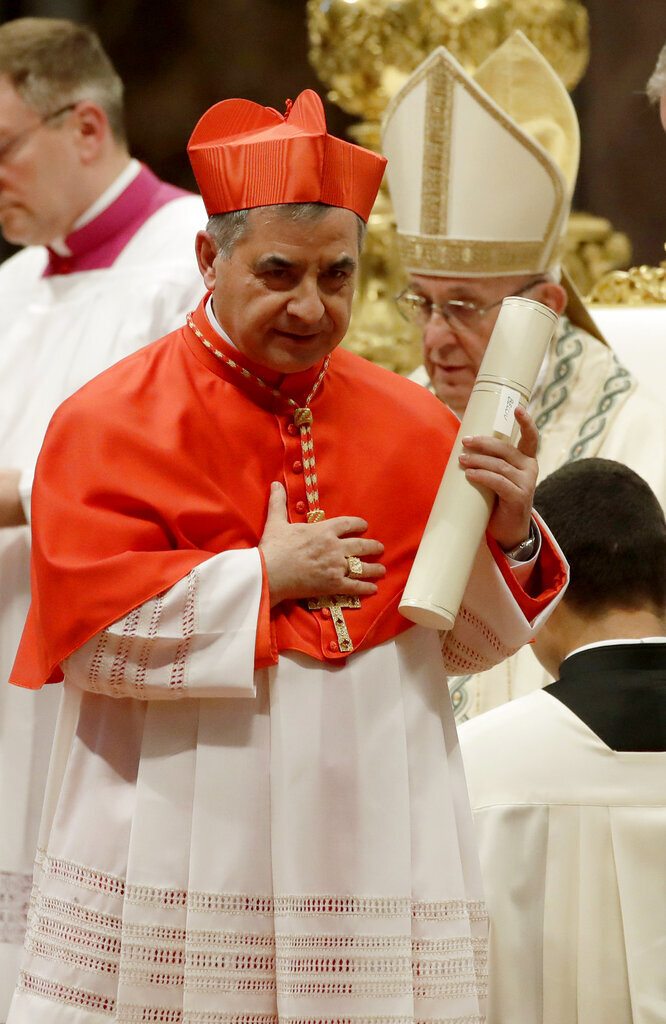 Alessandra Tarantino, ASSOCIATED PRESS
FILE - New Cardinal Giovanni Angelo Becciu leaves after receiving the red three-cornered biretta hat from Pope Francisduring a consistory in St. Peter's Basilica at the Vatican, Thursday, June 28, 2018. The Vatican tribunal weighing a financial fraud case heard from an unusual witness Thursday when a secret recording of Pope Francis was played to the court about the Holy See’s payments to free a nun held hostage by al-Qaida linked militants. According to Prosecutor Angelo Diddi, Becciu and a family associate secretly recorded Francis on July 24, 2021, three days before the Vatican trial opened, when Becciu spoke to him by phone from his Vatican apartment. (AP Photo/Alessandra Tarantino, File)

VATICAN CITY (AP) — The Vatican tribunal weighing a financial fraud case heard from an unusual witness Thursday, when a secret recording of Pope Francis was played to the court about the Holy See’s payments to free a nun held hostage by al-Qaida-linked militants.

The broadcast of the pope’s own voice in the courtroom marked a surreal new chapter in a trial that has already seen plenty of twists as Vatican judges try to determine who, if anyone, is criminally responsible for losing tens of millions of euros in Holy See assets.

Vatican prosecutors introduced the recording into evidence Thursday, saying it was part of a trove of material recently obtained from Italian financial police who are investigating a Sardinian charity linked to Cardinal Angelo Becciu, a onetime close Francis collaborator who is one of the 10 defendants in the Vatican trial.

Vatican prosecutors revealed that the Sardinian evidence has also been added to a new Vatican investigation in which Becciu is under investigation for alleged criminal conspiracy.

According to Prosecutor Angelo Diddi, Becciu and a family associate secretly recorded Francis on July 24, 2021, three days before the Vatican trial opened, when Becciu spoke to him by phone from his Vatican apartment. While most of the defendants are facing charges related to the Vatican’s 350-million-euro investment in a London property, Becciu is on trial for alleged abuse of office and embezzlement in relation to his dealings with the Sardinian charity and with a self-styled security analyst who is also on trial, Cecilia Marogna.

In the recording, Becciu asks Francis to essentially confirm that the pope had authorized the payments to a British firm that Marogna had identified to negotiate the freedom of a Colombian nun who was kidnapped in 2017 in Mali. Francis, who had just been released from a 10-day hospital stay, was familiar with the case and essentially concurred, according to several lawyers who heard the recording. The tribunal president ordered journalists to leave the courtroom during the playback of the recording, on the grounds that it hadn’t yet been formally admitted into evidence.

Sister Gloria Cecilia Narvaez was kidnapped in Mali in February 2017 by al-Qaida in the Islamic Maghreb, which had bankrolled its insurgency by kidnapping Westerners. During her captivity, the group periodically showed Narvaez on video asking for the Vatican’s help.

Becciu had told the court on May 5 that he had raised her plight with Francis and that the pontiff had agreed to spend up to 1 million euros to hire the British firm, Inkerman Group, to find the nun and secure her freedom. She was eventually released last year and met with the pope.

While the recording cast a questionable light on Becciu for having secretly recorded the pope, it substantiated claims by Becciu and other defendants that Francis was indeed familiar with, and in some cases approved, some of the expenditures that are at issue in the trial. There is no provision in the Vatican law for the pope to be interrogated during a criminal trial, but defense lawyers have said they want to ask him what he knows about the various financial decisions, and said the audio recording bolstered their argument that the pope's testimony is critical to the trial.

Prosecutors have accused Italian brokers and Vatican officials of a host of financial crimes, including fraud, embezzlement, corruption and abuse of office. In the London case, they accuse the defendants of defrauding the Holy See and of then extorting 15 million euros from the Vatican to acquire control of the property. The 10 defendants all deny wrongdoing.

After word emerged of the new criminal conspiracy investigation, Becciu’s lawyers late Thursday said they knew of no such investigation against the cardinal but that regardless “he strongly asserts his innocence” and was ready to clarify his position.

For the first time, the Vatican court heard this week that the Holy See lost more than 100 million euros on the transaction of the property alone, after it sold the property this year for some 186 million pounds after having spent 275 million pounds to buy it.

The Vatican official most closely associated with the deal, Monsignor Alberto Perlasca, took the stand for the first time Thursday in some of the most eagerly anticipated testimony, and immediately blamed his deputy for the fiasco. Perlasca had originally been a key suspect in the investigation, but in August 2020 changed his story and is now considered an injured party in the case.