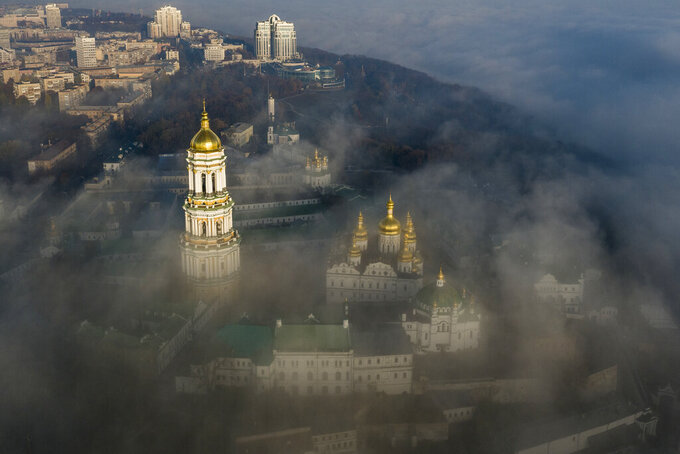 Evgeniy Maloletka, ASSOCIATED PRESS
FILE - An aerial photo shows the thousand-year-old Monastery of Caves, also known as Kiev Pechersk Lavra, the holiest site of Eastern Orthodox Christians taken through morning fog during a sunrise in Kyiv, Ukraine, Saturday, Nov. 10, 2018. Ukraine’s counter-intelligence service, police and the country's National Guard on Tuesday, Nov. 22, 2022 searched the Pechersk Lavra monastic complex, one of the most famous Orthodox Christian sites in the capital, Kyiv, after a priest spoke favorably about Russia – Ukraine’s invader – during a service there. (AP Photo/Evgeniy Maloletka, File)

KYIV, Ukraine (AP) — Ukraine’s counter-intelligence service, police officers and the country's National Guard on Tuesday searched one of the most famous Orthodox Christian sites in the capital, Kyiv, after a priest spoke favorably about Russia – Ukraine’s invader – during a service.

The search of the Pechersk Lavra monastic complex was highly unusual. Its cathedral, churches and other buildings are a UNESCO-listed World Heritage site. Overlooking the right bank of the Dnieper River, it has been a pilgrimage site for centuries.

The search, motivated by apparent security service suspicions of possible Russian covert operations at the complex, highlighted deep splits in the Orthodox church in Ukraine that have been sharpened by the nine-month Russian invasion.

But others remain loyal to the Moscow Patriarchate. The Pechersk Lavra monastic complex is part of that church. An Associated Press journalist saw dozens of officers conducting checks Tuesday both inside and outside the site, which remained open to visitors who showed their IDs.

The Ukrainian counter-intelligence and counter-terrorism service said the search is part of its “systematic work to counter the subversive activities of the Russian special services in Ukraine.”

Because of the Russian invasion, “the risk of committing terrorist acts, sabotage, and hostage-taking increases, especially in places with a large concentration of citizens,” said a statement from service, known by its initials in Ukrainian, the SBU.

It said officers were searching buildings for any hidden weapons or foreign citizens and potential intelligence. It said another site was also being searched in the Rivne region, 240 kilometers (150 miles) west of Kyiv.

He described the search as “as another link in the chain of these aggressive actions against Russian Orthodoxy.”

Moscow-based church authorities have repeatedly voiced support for the Kremlin’s invasion of Ukraine. Patriarch Kirill of Moscow, who heads the Russian Orthodox Church, has described the war as a “metaphysical struggle” between Moscow and the West. He condemned Tuesday's search as “an act of intimidation.”

The SBU operation follows a Nov. 12 service at the Pechersk Lavra complex where a Ukrainian Orthodox priest was filmed talking about the “awakening” of Russia.

The SBU said it was “looking into the details of the incident that happened in one of the temples of the Kyiv-Pechersk Lavra - where songs praising the ‘Russian world’ were sung.”

“Those who, in the conditions of a full-scale war unleashed by Russia against Ukraine, are waiting for the ‘awakening of Mother Rus’ should understand that this harms the security and interests of Ukraine and our citizens. And we will not allow such manifestations,” the head of the SBU, Vasyl Maliuk, said at the time.

The SBU then opened criminal proceedings because it said propaganda “praising the ‘Russian world’ was heard in the church.”