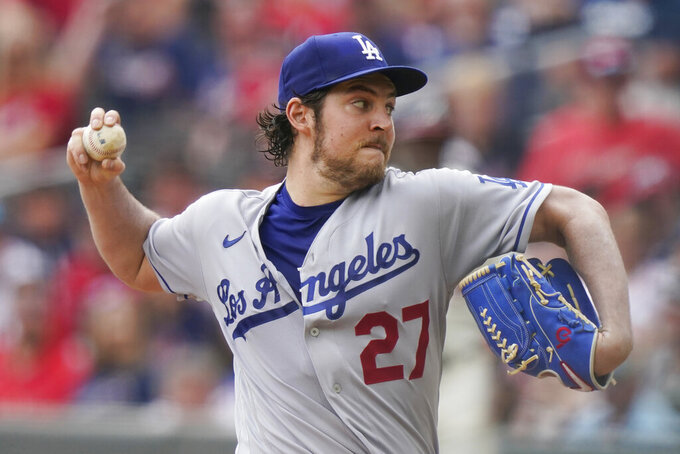 Brynn Anderson, ASSOCIATED PRESS
FILE - Los Angeles Dodgers starting pitcher Trevor Bauer (27) delivers in the first inning of a baseball game against the Atlanta Braves on Sunday, June 6, 2021, in Atlanta. A San Diego woman who alleges Bauer sexually abused her has filed a countersuit to his defamation claim, alleging the baseball star beat her and left her bruised. (AP Photo/Brynn Anderson, File)

LOS ANGELES (AP) — A San Diego woman who alleges Los Angeles Dodgers pitcher Trevor Bauer sexually abused her has filed a countersuit to his defamation claim, alleging the baseball star beat her and left her bruised, according to a court filing.

Bauer has denied abusing the woman he met through social media. He sued her for defamation in April, claiming she lied about details involving their sexual encounters in order to destroy his reputation and career while enriching herself.

Major League Baseball has suspended Bauer for two years, a ruling made after Bauer sued the woman. Bauer has said he engaged in consensual rough sex with the woman but did nothing to warrant a suspension.

The woman's battery claim filed Tuesday in U.S. District Court in Los Angeles alleges again that Bauer punched and choked her on two occasions during sex in 2021. The Associated Press generally does not name people who claim to be victims of sexual assault.

Bauer's attorneys released a statement Thursday pointing to a judge's decision last year denying the woman a restraining order. The judge said she had been “materially misleading” in part of her request.

“She ‘materially misled’ the court and could not meet the lowest burden of proof in our justice system — because her claims were false,” attorneys Shawn Holley and Jon Fetterolf said. "She is being sued for defamation to be held accountable for her lies and the damage it has caused. Her countersuit is a regurgitation of her judicially disproven claims and yet another attempt ... to defame Mr. Bauer and seek to profit from her lies.”

The woman's lawsuit says her life has been "turned into a nightmare by a powerful man who mercilessly battered her and counted on facing no consequences whatsoever for his despicable conduct.” After one encounter, the woman ended up with two black eyes, according to the filing.

The lawsuit demands a jury trial and unspecified damages.

In her response to Bauer's defamation suit, the woman denied allegations by his lawyers that she made a “false, misleading or defamatory police report” and denied she had altered or filtered photographs in requesting a restraining order in June of 2021.

The woman denied she had a plan to destroy Bauer’s reputation or career, or exploit him for money, although she admits “she was angry at Plaintiff because he had sexually assaulted her.”

Bauer is also suing two media outlets for defamation over their coverage of the allegations.

Bauer is appealing his suspension by MLB. There is no timetable for a ruling.