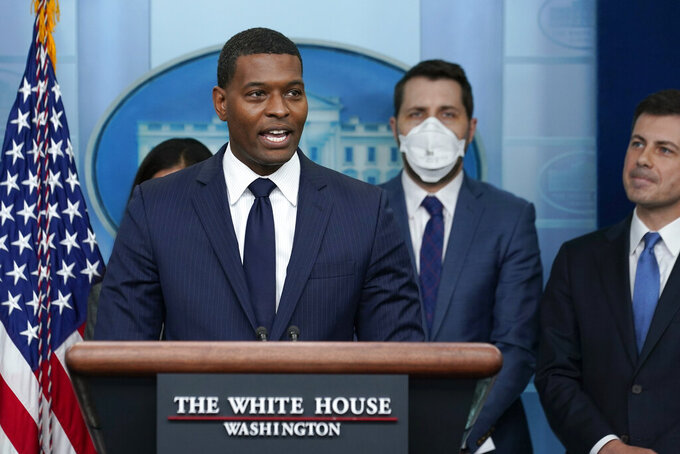 Susan Walsh, ASSOCIATED PRESS
FILE - Environmental Protection Agency administrator Michael Regan, left, speaks during a briefing at the White House in Washington, Monday, May 16, 2022. The Biden administration on Thursday, June 2, 2022, proposed undoing a Trump-era rule that limited the power of states and Native American tribes to block energy projects like natural gas pipelines based on their potential to pollute rivers and streams. (AP Photo/Susan Walsh, File)

WASHINGTON (AP) — The Supreme Court's climate change ruling on Thursday is likely to hinder President Joe Biden's plans to cut greenhouse gas emissions in half by the end of the decade and to make the U.S. a global leader again in the fight to slow global warming.

In its decision, the court limited the reach of the nation’s main anti-air pollution law that's used to reduce carbon dioxide emissions from power plants. The 6-3 ruling declared that the Clean Air Act does not give the Environmental Protection Agency broad authority to regulate emissions from plants that contribute to global warming.

The decision also could have a broader effect on other agencies’ regulatory efforts, from education to transportation and food.

Leaders in coal-state West Virginia welcomed the ruling. But Biden called it “another devastating decision that aims to take our country backwards." He said he will continue to use his authority when possible to protect public health and address climate change.

A look at how the court ruling could impact efforts to slow global warming and other regulatory actions by the executive branch.

WHAT DID THE COURT SAY?

Chief Justice John Roberts, writing for the court, said the Clean Air Act doesn’t give EPA the authority to regulate carbon dioxide emissions in a way that would force a nationwide transition away from the use of coal to generate electricity, and that Congress must speak clearly on this subject.

“A decision of such magnitude and consequence rests with Congress itself, or an agency acting pursuant to a clear delegation from that representative body,” he wrote.

The Clean Air Act, which EPA used in its rulemaking, was passed in 1970, when global warming was little known.

"It's almost as if the court needs Congress to make a new law every time a new problem emerges, which is ridiculous and dangerous,'' said Georgetown University Law Professor Lisa Heinzerling, a former EPA official. She authored winning arguments in a 2007 case in which a previous high court found that greenhouse gases are air pollutants under the Clean Air Act and can in fact be regulated by the EPA.

WHAT DOES THE RULING MEAN FOR THE FIGHT AGAINST CLIMATE CHANGE?

In the short term. the ruling makes it harder for the Biden administration to meet its ambitious goal to slow climate change, even as environmental damage attributable to global warming increases and warnings about the future grow ever more dire. Biden has pledged to cut U.S. greenhouse gas emissions at least in half by 2030 and push the country’s electrical grid to become carbon-free by 2035.

But those goals are in clear jeopardy after the Supreme Court decision handed the responsibility to Congress. Biden's legislative approach has little chance against opposition from congressional Republicans and Democratic Sen. Joe Manchin from West Virginia.

The court ruling underscores for a global audience the difficulties a U.S. president has in making lasting progress to cut fossil fuels by executive authority. The United States is the world’s biggest climate polluter over time. Biden’s struggling to make big systemic changes at home won’t impress countries such as China, India and Russia as the United States pushes them to end their dependency on coal and make other big emissions cuts.

“Unfortunately, the climate system doesn’t care about our politics,'' said Northern Illinois climate scientist Victor Gensini, adding that the court was "essentially leaving the decision to regulate carbon dioxide and other gases to those in Congress that may not have the best interest of the planet in mind.”

WHAT DOES IT MEAN FOR PEOPLE?

With the fight against climate change slowed, advocates say, sea level rise and weather extremes such as hotter wildfires and more severe droughts are likely to continue.

“In a way, this ruling is most concerning for communities who live on the fence line of power plants, who are exposed on a daily basis to the airborne pollutants that are released with greenhouse gases, and they face the most acute exposures,” said Sabrina McCormick, associate professor of environmental and occupational health at George Washington University.

California Gov. Gavin Newsom said the ruling makes it even more important that his state and others continue efforts to combat the climate crisis. “While the court has once again turned back the clock, California refuses to go backward — we’re just getting started,″ Newsom said.

California has taken a lead in setting strict emissions standards for cars and trucks.

HOW WILL THE RULING AFFECT OTHER FEDERAL AGENCIES?

Some legal scholars say the ruling's impact extends beyond climate change and the EPA to affect a host of major regulatory actions by the executive branch. The court held that Congress must speak with specificity when it wants to give an agency authority to regulate on an issue of major national significance.

The court is announcing it will apply this "broadly and aggressively,'' Heinzerling said.

She cited earlier rulings by the court to block the Biden administration’s vaccine mandate for large employers and to lift a federal ban on evictions imposed during the COVID-19 pandemic. In both cases, the court ruled that Congress had not given federal agencies specific power to adopt the wide-ranging measures.

“The court doesn’t want an agency to find authority for the first time" in an existing statute to address a new problem, Heinzerling said.

Even before the court's ruling, opponents were threatening court action challenging the Education Department's proposed rule extending protections under the Title IX women's rights law to LGBTQ students, and an upcoming regulation of the rights of transgender students in athletics.

“Whenever the Biden regulations come out, it’s absolutely going to be a bevy of court challenges to them, and this will absolutely be an argument trying to invalidate those regulations,” said Scott Schneider, a lawyer who has worked on Title IX issues.

The ruling is also being watched closely in the technology sector, where agencies such as the Federal Trade Commission and the Federal Communications Commission have been pursuing stronger rules meant to promote internet competition and rein in monopolistic behavior by Big Tech companies.

Stronger antitrust enforcement sought by Biden and FTC Chair Lina Khan “was already highly questionable and I think is weakened significantly by this decision,” said Neil Chilson, an FTC chief technologist during the Trump administration and now a research fellow at libertarian-leaning Stand Together.

UCLA law professor Blake Emerson said that as a result of the ruling, agencies are likely to become more cautious ”and maybe less effective in their efforts to address major threats to public health and safety."

WHAT WILL CONGRESS DO?

The court ruling says it is up to Congress to act with specificity on “major questions” such as climate change. That is unlikely.

Sen. Sheldon Whitehouse, a Rhode Island Democrat who is a leading advocate for strong action on climate, said the court has handcuffed the government's ability to act.

“The problem is this: They closed down administrative agencies’ ability to regulate, and then they send the questions over to Congress where we are blockaded by the filibuster and where all the big, dark polluter money that they let into the political system holds sway,'' he told The Associated Press.

However, West Virginia Sen. Shelley Moore Capito, the top Republican on the Senate environment panel, hailed the court ruling, which comes in a case brought by her state.

“If Congress had intended to give EPA such sweeping authority to transform an entire sector of our economy, Congress would have done so explicitly,'' Capito said. She vowed to continue strong oversight over EPA.

WHAT CAN EPA DO?

The decision does not prohibit EPA from regulating carbon emissions from coal plants, advocates said, but does limit its authority to do so.

EPA head Michael Regan said the agency will move forward with "lawfully setting and implementing environmental standards that meet our obligation to protect all people and all communities from environmental harm.″

The agency expects to propose a new power plant rule early next year.

“EPA has an important role to play, and it's important that they act,'' said David Doniger, senior strategic director of climate and clean energy at the Natural Resources Defense Council.

The Edison Electric Institute, which represents investor-owned electric companies, said U.S. electric companies are committed to providing clean energy "without compromising on the reliability and affordability that customers value.''

Utilities will continue to work with EPA as officials "undertake a new rulemaking that is consistent with the court’s decision,” said Emily Fisher, EEI's general counsel and senior vice president.