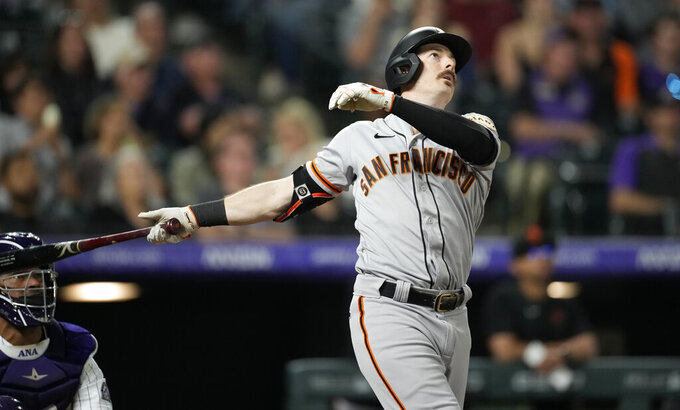 DENVER (AP) — Curt Casali hit two home runs, Mike Yastrzemski delivered a go-ahead homer in the top of the ninth inning and the San Francisco Giants pulled out a 7-6 win over the Colorado Rockies on Monday night.

Ryan McMahon homered for the Rockies, who lost for the 11th straight time to the Giants dating to Aug. 15, 2021. It’s San Francisco’s longest win streak ever against the Rockies and matches an 11-game streak against the Houston Astros from Sept. 22, 1964, to May 22, 1965, according to Stats.

The skid is the longest for Colorado against a single opponent since dropping 12 straight to the Los Angeles Dodgers from Sept. 9, 2018,to June 27, 2019.

“We’ve got a lot of respect for that group over there. Their lineup is as good as any,” Casali said. “It’s just one of those streaks where it’s been going our way.”

Daniel Bard (1-2) struck out the first two batters he faced before Yastrzemski connected, driving it deep into the right-field seats for the lead. “I was just trying to get a pitch to drive and elevate and I got one,” Yastrzemski said. “Any time you can do something to help the team win is a really good feeling. Just really happy with that swing.”

John Brebbia (1-0) pitched a scoreless eighth for the win and Camilo Doval got three outs for his sixth save in seven chances.

Both of Casali’s home runs were off Ty Blach, a former Giant who came on in the top of the third inning when Colorado starter Antonio Senzatela had to exit early after straining his lower back throwing a warm-up pitch.

Casali’s solo shot in the third evened the score at 1-1 and his three-run drive in the fifth put San Francisco up 4-1. “Any time you hit a homer in the big leagues, that’s cool,” Casali said. “To be able to do it twice is a dream.” Casali had his third career mutlihomer game and matched career highs with three hits and four RBIs on the night.

“It’s one of those stretches where I just feel good at the plate right now,” Casali said. “I work hard on defense, and that’s always a constant for me, and sprinkle in some offense here and there. It’s nice to drive in some runs and score some runs. It’s fun, that’s all I can say.” Colorado chipped away, getting an RBI double from Charlie Blackmon that chased San Francisco starter Alex Wood with one out in the bottom of the fifth. C.J. Cron followed with his first of two RBI singles and McMahon led off the sixth with his fourth home run of the season to tie it up at 4-4.

Each club added a pair of runs in the seventh to tie the game up for the third time.

Blackmon’s double was the 271st of his career, putting him in front of Dante Bichette for the fourth-most in Rockies franchise history. He is six doubles shy of tying Carlos González for third-most in the team’s history.

Giants: INF Tommy La Stella was reinstated from the 10-day injured list and made his season debut as the team’s designated hitter, hitting an infield groundout before being lifted for pinch-hitter Darin Ruf in the fifth inning. … RHP Anthony DeSclafani (right ankle inflammation) was transferred to the 60-day injured list and OF Luis González was optioned to their Triple-A farm club in Sacramento. RHP Yunior Marte has also been optioned to Sacramento and the team selected the contract of RHP Mauricio Llovera from Sacramento.