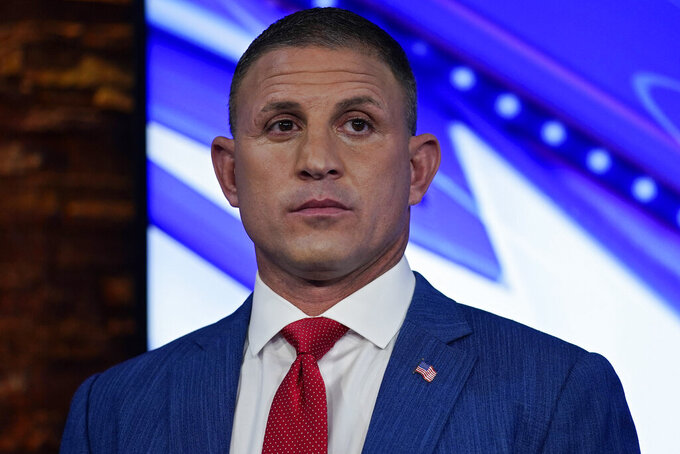 Lombardo, head of the Las Vegas police department, urged Heller and the other GOP candidates Wednesday night to follow the former president's lead and embrace what he called his imminent nomination in the June 14 primary.

“For all practical purposes, this primary is over,” Lombardo said during a spirited debate before early voting begins on Saturday.

“There's nothing more to argue about,” he said. “I'm leading in all the polls. I have the most money associated with a successful campaign. I have the endorsement of President Donald Trump. ... We need to come together."

Heller, who had a complicated relationship with Trump as both a friend and foe before he lost his Senate seat in 2018, lit into Lombardo during the hour-long debate in Las Vegas.

“Do you want a proven conservative, or do you want someone who is best friends with Steve Sisolak?" Heller said.

“Sheriff Lombardo and Steve Sisolak contribute to each other’s campaigns. They raise money for each other. They sit on each other’s transition committees,” he said. "We have two people identical — Sisolak and Lombardo.”

All five said they would oppose any new gun restrictions in the wake of the Texas school shooting, although Lombardo said he differed from the others in that he does not advocate a constitutional right to carry a concealed weapon.

On other topics, Lombardo and Lee broke from the others in saying they would not send National Guard troops to the U.S. border with Mexico if elected governor.

Heller claimed he would be the biggest champion of efforts to roll back abortion rights, and he criticized Lombardo and Gilbert for failing to take a strong enough “pro-life” stand.

Reeves Oyster, a Sisolak campaign spokesperson, said the debate proved that no “Republican candidate running for governor has the experience, plan or temperament needed to move Nevada forward."

Oyster added: “While Republicans tout their `A' ratings from the gun lobby and Nevada Right to Life, Governor Sisolak is lowering costs for all Nevadans, growing our economy and fighting for safer communities."

During Wednesday's debate, Lombardo insisted he is “pro-life” and would consider proposals to restrict abortion rights or repeal existing state law making abortion legal in Nevada through the first 24 weeks of pregnancy. But he declined to commit to any specifics.

Gilbert said he too is “pro-life” but added that, “at the end of the day ... Nevada is a pro-choice state and we'd have to respect that.”

Heller said that effectively means they're both “pro-choice.”

“When you say that you are going to support the laws we have in place but I'm pro-life, that makes you pro-choice,” Heller said.

“I'm going to do everything I possibly can to make Nevada a pro-life state,” he said. “I will introduce legislation. I'll raise the money necessary to overturn the abortion statutes we have here in the state of Nevada.”

Each of the five Republicans said the school shooting in Texas had more to do with a lack of mental health resources than gun regulations.

“We have enough gun laws,” said Gilbert, who wants to end a ban on concealed weapons at Nevada schools and colleges. “These always seem to happen in gun-free zones.”

Lee said he wants to expedite processing of concealed weapon licenses for those who need them to defend themselves.

Heller said he wouldn’t support any new restrictions on Nevadans’ right to carry a gun, concealed or otherwise.

“I think we have proven in Chicago and New York City that excessive tax or gun laws do not work. I don’t want to stand here ... and negotiate away our Second Amendment rights here in the state of Nevada,” Heller said.

Lombardo, who helped lead the investigation into the 2017 mass shooting on the Las Vegas Strip that left 59 dead, said the killings in Texas were a “tragic event similar to what occurred locally. ... I’ve lived that experience.”

“I’m different than the rest of the candidates. I don’t support a `constitutional carry.' I believe training should go along with it," Lombardo said.