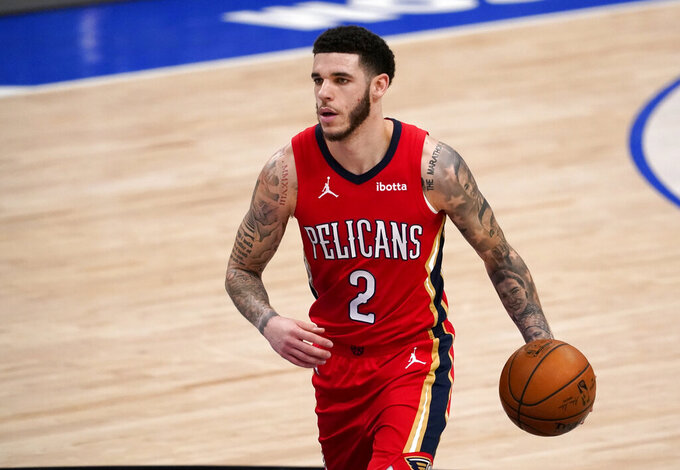 Tony Gutierrez, ASSOCIATED PRESS
FILE - In this Feb. 12, 2021, file photo, New Orleans Pelicans' Lonzo Ball brings the ball up during the team's NBA basketball game against the Dallas Mavericks in Dallas. A person familar with the situation says Ball is heading to Chicago in a sign-and-trade agreement that will also send Bulls guards Tomas Satoransky and Garrett Temple III to the Pelicans. The person spoke to The Associated Press on condition of anonymity Monday, Aug. 2, because trades cannot becoming official until Friday under NBA rules. (AP Photo/Tony Gutierrez, File)

NEW ORLEANS (AP) — The New Orleans Pelicans are sending Lonzo Ball to Chicago and will acquire Devonte Graham from Charlotte as part of separate sign-and-trade agreements, two people with knowledge of the situation said.

The Ball trade will send Bulls guards Tomas Satoransky and Garrett Temple to the Pelicans, and New Orleans will send a draft lottery-protected 2022 first-round choice to Charlotte, the people said.

The people spoke to The Associated Press on condition of anonymity Monday because trades cannot become official until Friday under NBA rules.

Ball is represented by Klutch Sports, which announced that the four-year veteran guard had agreed to a four-year, $85 million contract. ESPN first reported the trade, which also sends a Bulls second-round draft choice to New Orleans.

But after the Hornets selected point guard LaMelo Ball — Lonzo's younger brother — with the third overall pick in 2020 and Graham got injured, he wound up in a backup role last season. Graham averaged 14.8 points, 2.7 rebounds and 5.4 assists in 30.2 minutes while appearing in 55 games.

Lonzo Ball, a four-year veteran who turns 24 in October and entered the offseason as a restricted free agent, is coming off his most productive season. In his second year with the Pelicans, he averaged career highs in points (14.6 per game) and field-goal percentage (41.4) while averaging 5.7 assists. Drafted second overall by the Lakers out of UCLA in 2017, Ball has changed his shooting mechanics since being traded to New Orleans as part of a blockbuster deal that sent Anthony Davis to Los Angeles.

Ball hit a career-high 172 3-pointers last season while making a career-best 37.8% of his shots from deep.

Now he goes from teaming with dynamic power forward Zion Williamson to joining Olympian Zach LaVine and two-time All-Star center Nikola Vucevic in a trio the Bulls hope will transform them into contenders in the Eastern Conference.

The Bulls finished the 2020-21 campaign 11th in the East at 31-41, two games behind Charlotte for the final play-in spot. While they missed the playoffs for a fourth straight year, it was their first season with Arturas Karnisovas leading the front office and Billy Donovan coaching the club.

Graham also was a restricted free agent. He ranked 14th in the NBA in total 3s last season, knocking down 179 shots from beyond the arc as he became the second player in franchise history with 175-plus 3-point field goals in consecutive seasons.

The Pelicans' long-term plans for Satoransky and Temple are unclear. New Orleans basketball operations chief David Griffin has a history of expanding initial two-team team trades to involve more teams and additional swapping of assets, as he did last season when he traded Jrue Holiday to Milwaukee. That deal expanded to include Denver and Oklahoma City.

Satoransky, from the Czech Republic, has played five NBA seasons — his first three with Washington and past two with the Bulls. He has averaged 7.4 points and 4.2 assists in 333 games.

Temple is an 11-year veteran out of LSU who also has played for Houston, Sacramento, San Antonio, Milwaukee, Charlotte, Washington, Memphis, the Los Angeles Clippers and Brooklyn. He has averages of 6.5 points, 2.3 rebounds and 1.8 assists.

Meanwhile, the Pelicans still have two young guards on the roster who were first-round draft choices — Nickeil Alexander-Walker in 2019 and Kira Lewis Jr. in 2020.

Also, the Pelicans don't run their offense through their point guard as often as most teams do. Last season, Williamson thrived in New Orleans' “point-Zion” offense, in which the 6-foot-7, 284-pound power forward demonstrated he could be effective initiating plays off the dribble and handling the ball in transition.