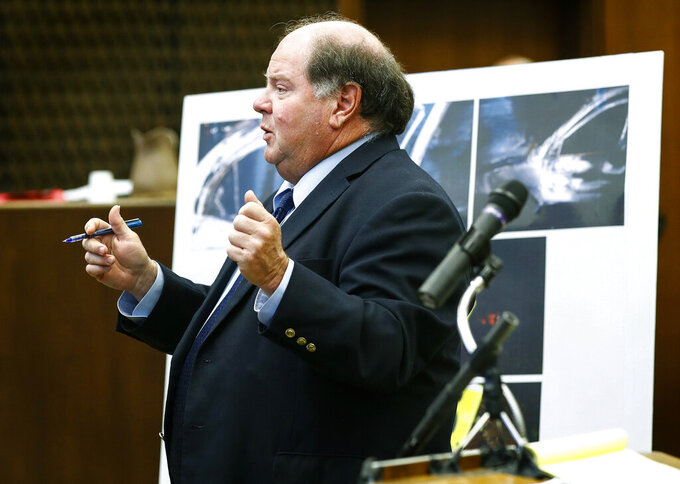 Mark Weber, ASSOCIATED PRESS
FILE - Lead prosecutor John Champion speaks during the retrial of Quinton Tellis in Batesville, Miss., Wednesday, Sept. 26, 2018. Champion died on Sunday, Sept. 4, 2022, at his home in Senatobia, Miss., according to a funeral home. No cause of death was given for the 61-year-old. (Mark Weber/The Commercial Appeal via AP, Pool, File)

No cause of death was given for the 61-year-old.

Appointed the chief prosecutor for a five-county circuit including Desoto, Tate, Panola, Tallahatchie and Yalobusha counties in 2001, Champion repeatedly won reelection to the post. He had earlier been hired as an assistant district attorney in 1993, and was appointed to the post by Gov. Ronnie Musgrove after Musgrove named District Attorney Ann Lamar to the bench. Lamar would eventually become a state Supreme Court justice.

He was most noted for two prosecutions of Quinton Tellis, who authorities accused of killing Jessica Chambers in 2014 by setting her on fire while she was still alive. Both trials resulted in hung juries.

Champion's funeral will be held Friday at Oxford-University United Methodist Church in Oxford. He is survived by his mother, Annette Johnston Champion of Oxford; daughters Brittney Champion of Senatobia and Kelli Champion of Atlanta; his sister, Laura C. Hall of Atlanta; and two grandchildren.