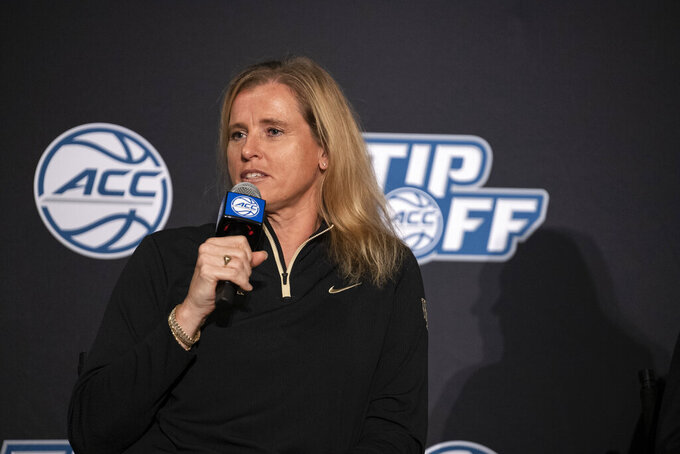 The top eight scorers return for the fifth-ranked Wolfpack, picked as the ACC favorite ahead of the sixth-ranked Cardinals in a year featuring top teams filled with veteran talent. Louisville has multiple returning starters while bringing in two proven power-conference transfers to offset the loss of two-time league player of the year Dana Evans.

“I think we definitely both have our eyes on each other,” Louisville sophomore guard Hailey Van Lith said. “All respect, obviously. But we’re both competitive teams and we want to win. … I really do enjoy playing them.”

N.C. State (22-3, 12-2 ACC) won both of last year’s meetings with Louisville (26-4, 14-2), including 58-56 in the ACC Tournament championship game on Raina Perez’s final-seconds jumper. That helped the Wolfpack earn the program’s first No. 1 seed in the NCAA Tournament before falling in the Sweet 16.

“I think nobody believes in us more than we do and nobody wants to go further than we do ourselves,” Cunane said.

Here are things to know about the ACC this season:

No. 17 Georgia Tech was picked third after reaching the program's first NCAA Sweet 16 since 2012. The Yellow Jackets (17-9, 12-6) brought back nearly their entire roster from that group, led by senior guard Lotta-Maj Lahtinen (15.0 points, 4.6 rebounds).

“I think the real challenge for us is going to be that we are no longer the hunter, that we are going to be hunted — and I think that's a totally different feel once you get on the court to play,” coach Nell Fortner said.

The Hokies hadn't reached the NCAAs since 2006 before last year's trip to the second round. Junior center Elizabeth Kitley (18.2 points, 10.4 rebounds) is the league's top returning scorer after finishing second to Louisville's Evans last year, while guard Aisha Sheppard (17.7 points) was third in the ACC in scoring.

Longtime Florida State coach Sue Semrau returns to the sideline for the 16th-ranked Seminoles after she took a leave of absence last season to be with her mother as she recovered from ovarian cancer.

“It's funny because they're intact from when I left ... except they got a year of experience and they're a lot better," Semrau said with a chuckle.

The league will look to top its national-best haul of eight NCAA bids from each of the past three tournaments. The list included North Carolina earning a bid in its second season under Courtney Banghart, Wake Forest reaching the tournament for the first time since 1988 under Jen Hoover and Syracuse.

As for the Orange, Vonn Read took over in August as acting coach after longtime head coach Quentin Hillsman resigned amid an external review of his program over alleged threats and bullying of players.

Duke and Virginia are returning after canceling their seasons last year due to the COVID-19 pandemic. The Blue Devils played just four games in their debut season under Kara Lawson, while the Cavaliers lost all five games under Tina Thompson.

Lawson said the time off was “more normal than you'd think” with the Blue Devils having workouts and practices, while Thompson said her team focused on individual skill development.

“I admire our players a lot because it's really hard to practice every day and not have that reward of the game coming at the end of the week,” Lawson said. “But they were mature and they focused on improvement.”