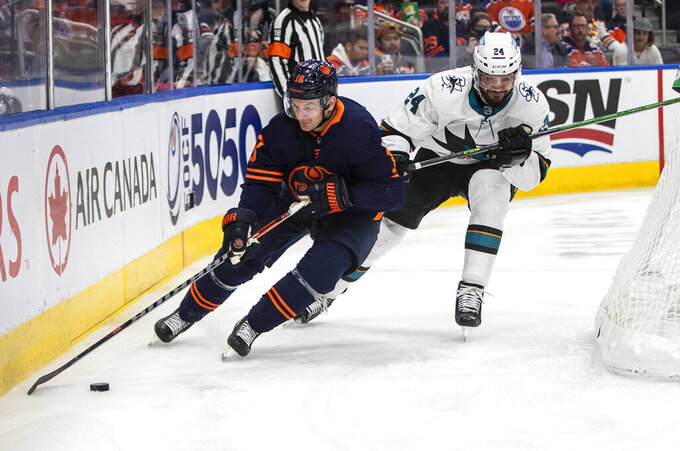 SAN JOSE, Calif. (AP) — The San Jose Sharks have locked up two of their potential free agents early in the offseason, agreeing to two-year deals with forward Alexander Barabanov and defenseman Jaycob Megna.

Interim general manager Joe Will announced the deals on Monday as the Sharks placed a priority on retaining two players who were set to hit the open market in July.

The 27-year-old Barabanov spent most of the season on San Jose's top two lines, playing mostly with center Tomas Hertl. He had 10 goals and 29 assists in 70 games in his second season in the NHL.

Barabanov played 22 games in 2020-21 for Toronto and San Jose after playing the previous seven seasons in the KHL in Russia.

“Alexander had a very good first full year in the NHL, showing that he is a consistent point producer and playmaker,” Will said. “Paired with his grit and hard work, he has the potential to improve upon his success this past year."

After splitting time between the AHL and NHL the first part of the season, Megna played regularly for the Sharks over the final seven weeks and showed enough for them to want to bring him back next season.

The moves come as the Sharks enter an offseason of uncertainty after missing the playoffs for a third straight season for the first time in franchise history.

There are also questions about the status of coach Bob Boughner, who has a 67-85-23 record since taking over for Peter DeBoer in December 2019.

Boughner's status might not be resolved until a new general manager is hired.