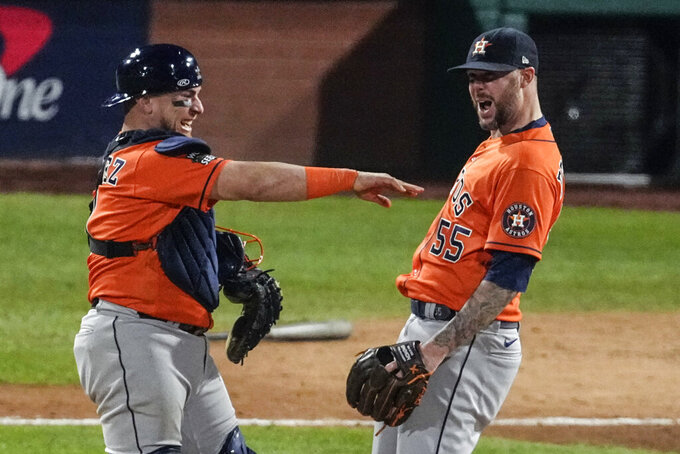 For those who gripe about baseball squandering far too much time wallowing in its past — yep, count me in — the only no-hitters in World Series history prove just how much the game has, indeed, changed.

About the only similarity between Don Larsen's perfect game for the New York Yankees and the Houston Astros' combined no-no Wednesday night was the number of pitches thrown by the starters.

Larsen needed just 97 of them to mow down all 27 batters he faced in Game 5 of the 1956 World Series against the Brooklyn Dodgers.

Cristian Javier tossed that exact same number in Game 4 at Philadelphia but went only six innings before calling it a night, giving way to a trio of relievers to finish off the masterpiece.

Larsen pitched in an era when one was expected to finish what he started. That season, with 16 teams playing a 154-game schedule, 758 complete games were recorded — more than 61% of all regular-season contests.

Eight more were thrown in the World Series, five by the Yankees and three by the Dodgers.

Compare that with the current state of the game, when starters are feted like royalty if they last five or six innings. With nearly double the teams and a 162-game schedule, there were just 36 complete games during the regular season — less than 1.5% of the starts.

There haven't been any in the postseason, but that's nothing new. Houston's Justin Verlander was the last pitcher to throw a complete game in October or November, five long years ago when he beat the New York Yankees 2-1 in Game 2 of the 2017 AL Championship Series.

These days, you've got a better chance of spotting Bigfoot than catching a pitcher going nine innings in a playoff game, a phenomenon that has become even more pronounced with the emphasis on bullpens that can come at hitters in 100 mph waves.

Astros manager Dusty Baker wasn't thinking of posterity when he turned to his 'pen. In fact, he expected someone to get a hit off the three relievers he planned to use.

“A combined no-hitter is, I mean, that’s hard to do because usually somebody’s going to give it up,” Baker said.

Still, as impressive as Javier was, there was zero chance of him getting a chance to match the hitless part of what Larsen did over a full game (a perfect game was already out of reach since the Astros starter walked two).

The Dominican flamethrower wasn't the least bit peeved about having to watch the final three frames from the dugout. The subject didn't even come up at his news conference afterward.

Why would it? Javier had already been part of another combined no-hitter this season, going seven innings in a 3-0 victory over the New York Yankees on June 25. Two relievers completed that one, including the same closer — Ryan Pressly — who finished the job against the Phillies.

Javier and Pressly are not just the first pitchers to be part of two combined no-hitters in the same season, in the same two games, they are the first to do it in a career.

They surely won't be the last.

Of the 317 no-hitters in major league history, just 19 have involved more than one pitcher. But eight of those joint efforts have occurred in the last five seasons, coinciding with the rise of third-time-through-the-batting-order analytics and overstocked bullpens.

The Astros and Phillies are both carrying 13 pitchers on their World Series rosters — half of their available players. Back in 1956, the Yankees went with a 10-man staff (as did the Dodgers) and each team only used eight arms through the entirety of their seven-game series.

(A quick sidebar: Future Hall of Famer Sandy Koufax was one of the pitchers the Dodgers never called on, though that's not too surprising since he was an erratic 20-year-old still trying to harness his enormous talent.)

As depreciated as starting pitching has become in the regular season, it's even more so in the playoffs.

A bit overlooked in the midst of Houston's no-hitter was Philadelphia's decision to lift Aaron Nola, one of its most reliable starters, after he gave up three straight singles to load the bases at the start of the fifth inning.

Never mind the game was still scoreless, or that Nola likely would've gotten a chance to escape the jam during the regular season. The managers go with a a different playbook at this time of year.

The Phillies had all their top relievers lined up and ready to go, so manager Rob Thomson didn't hesitate to make the call.

He had no regrets, either, even after Jose Alvarado hit a batter to force in the game's first run — the only one that would be needed, it turned out — followed by two more hits sandwiched around a sacrifice fly.

Just like that, the Astros had a five-run cushion, striking about as quickly as it would've taken Bruce Springsteen, who was in the park, to belt out a rendition of “Glory Days.”

“I thought Nola’s stuff was pretty good, but I think that’s the right time to bring in Alvarado and just try to stop everything,” Thomson explained. “As much as you can, stop the momentum. Unfortunately, it got away from us and they got five. But that’s his spot right there.”

Barring the games being cut from nine to six innings, Larsen will likely remain the lone pitcher to complete a no-hitter in the World Series — much less a perfect game.

Which is not meant in any way to degrade the stellar performance turned in by Javier and his three teammates. They deserve to be mentioned right alongside Larsen, who died in 2020 at the age of 90.

Baseball, you see, can change.

Paul Newberry is the national sports columnist for The Associated Press. Write to him at pnewberry(at)ap.org or at https://twitter.com/pnewberry1963