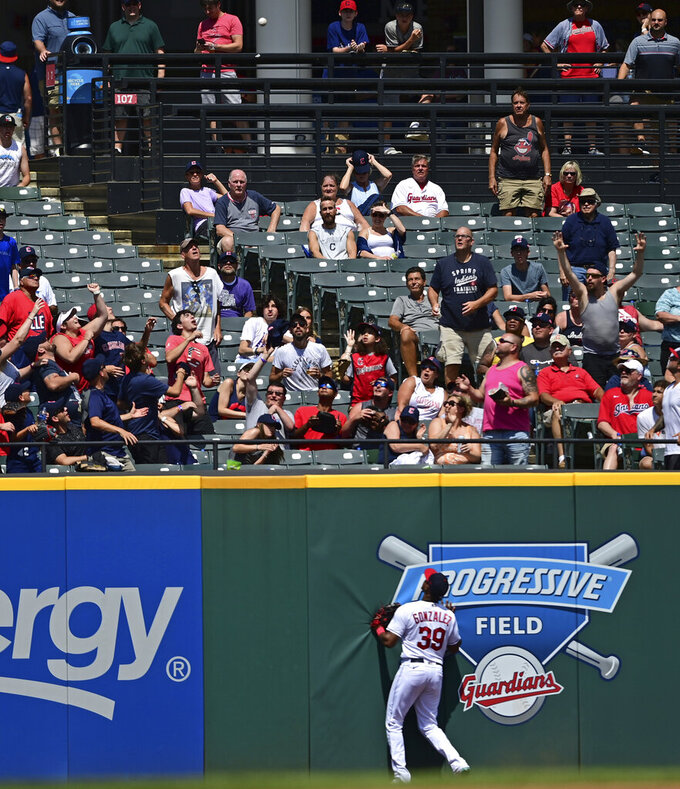 CLEVELAND (AP) — Amed Rosario hit a mammoth three-run homer and rookie Oscar Gonzalez added a solo shot, sending the Cleveland Guardians to a 7-4 victory over the Arizona Diamondbacks on Wednesday.

Rosario’s career-long, 450-foot drive to dead center was the longest of the season at Progressive Field, topping the 447-footer by Boston’s Alex Verdugo on June 25. His sixth homer of the year lifted Cleveland to a 4-0 lead in the fifth.

“Where he hit the ball, that was big boy territory there,” Guardians manager Terry Francona said. “Amed is so steady at a high level.”

Gonzalez homered off Kevin Ginkel in the sixth and doubled home a run in the seventh to push the Guardians’ advantage to 7-2. José Ramírez and Myles Straw also drove in a run as Cleveland remained one game behind AL Central-leading Minnesota.

“I get to see Amed every day in practice and I know he has that power, so really, it doesn’t surprise me,” Gonzalez said. “I know he has the talent and the power to be able to put up these type of at-bats.”

Henry described Rosario’s long homer as “a slider that didn’t slide, and that’s kind of what happens when you do that.”

“This is the dream you have since you first picked up a baseball, so to have so many people share it with me was really special,” Henry said. “I went through probably every emotion on the spectrum, but I was making an effort to control them.”

Alek Thomas hit a two-run homer off Bieber in the sixth and Geraldo Perdomo connected for a two-run shot against Eli Morgan in the ninth.

Thomas, Daulton Varsho and Jose Herrera each had two hits for the Diamondbacks, who ended their six-game road trip with five losses.

“We struck out 15 times today, and we’ve got to be better than that,” Arizona manager Torey Lovullo said.

Rosario went 2 for 4 and scored twice, taking over the AL lead with 118 hits. Steven Kwan singled to push his hitting streak to 17 games for Cleveland, the longest by a rookie since Pittsburgh’s Ke’Bryan Hayes had a 19-gamer in 2020-2021.

The Guardians won twice in the three-game set, denying Arizona its first series victory in Cleveland in 20 years. The teams have split 22 all-time meetings.

Guardians third baseman Tyler Freeman, one of the top-rated prospects in the organization, was recalled from Triple-A Columbus and singled in his big league debut. He went 1 for 3 with a walk.

Freeman batted .279 for the Clippers while making 35 starts at shortstop, 33 at second base and three at third.

“We’re going to move Tyler around a bit because we will have some flexibility there,” Francona said. “He has a little presence about him already.”

Diamondbacks: LHP Tyler Gilbert (left elbow sprain) was transferred to the 60-day injured list in order to clear a 40-man roster spot for Henry. Gilbert threw a no-hitter in his first start in the majors on Aug. 14, 2021, against San Diego.

Guardians: RHP Cody Morris (right shoulder strain), who has been on the IL since April 7, reported to Triple-A Columbus on a rehab assignment. Morris made three starts in the Arizona Complex League in July, tossing six scoreless innings.