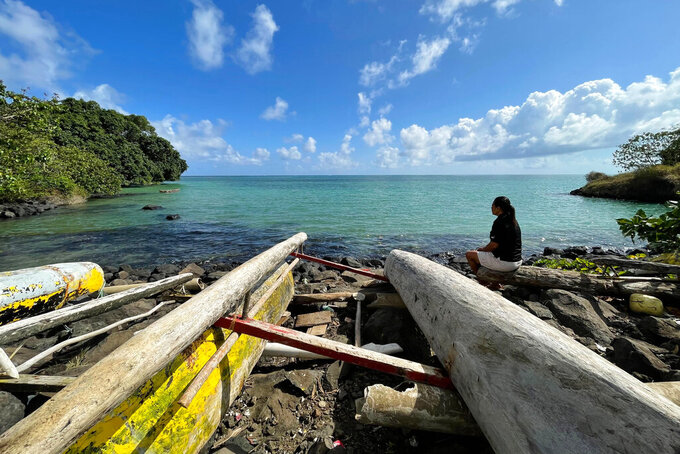 Lagipoiva Cherelle Jackson, ASSOCIATED PRESS
Eseta Vusamu sits near the water Thursday, Sept. 29, 2022, in the village of Faleasiu on the island of Upolu in Samoa. When and if an island nation fully submerges due to climate change, what happens to the nationalities of its citizens? “If you ask our people to move, there is no way we would voluntarily leave,” Vusamu said. (AP Photo/Lagipoiva Cherelle Jackson)

APIA, Samoa (AP) — When and if an island nation fully submerges due to rising seas, what happens to the nationalities of its citizens?

This and other related questions are being considered by island nations advocating for changes to international law as climate change threatens their existence.

“Climate change induced sea level rise is a defining issue for many Pacific Island states and like most climate change issues, Pacific Island states have been at the forefront of challenging international law to develop in a way which is equitable and just,” said Fleur Ramsay, head of litigation and climate lead of the Pasifika Program at the Australia-based Environmental Defenders Office.

During a recent with The Associated Press, Ramsay noted the shortcomings in the development of international law. For example, under international law, there are discussions of nomadic tribes making claims over lands they have historically passed over. However, rights over historical ocean passages have not yet been explored for citizens of island nations.

“If you ask our people to move, there is no way we would voluntarily leave," said Eseta Vusamu, who is currently working in Samoa but from a village on the island of Ovalau, Fiji. “There are graves there, these are our ancestral lands.”

Vusamu's village, Tokou, along with many coastal communities in Fiji, were hard hit during Cyclone Winston in 2016, which led to the relocation of over 3,000 villagers from the coastal areas.

There is already evidence of loss of islands. Between 1947 and 2014, six smaller islands in the Pacific archipelago of the Solomon Islands completely vanished, according to a paper published in Environment Research Letters in 2016. The study identified the complete loss of reef islands and other islands that were experiencing severe shoreline recession, leading to the relocation of some communities. And in its report earlier this year, the Intergovernmental Panel on Climate Change, the world's top body of climate scientists, noted risks to coastal areas and ecosystems due to submergence and flooding through sea level rise and increased height of waves.

The issue of protecting sovereignty is a constant topic of discussion for many Pacific Islands leaders. The maritime and resource entitlements that islands stand to lose in the face of land loss were part of talks during the Pacific Small Island Developing States meetings this week in Apia, Samoa. The meetings came on the heels of last week's U.N. General Assembly meetings, in which Pacific Island leaders pushed for changes that would protect island nations as they lose territory to erosion and rising sea levels.

Leaders of Tuvalu, the Marshall Islands and Kiribati called on the international community to help island nations in several ways: preserve the sovereignty of Pacific island countries facing an existential threat of sea rise, finance adaptation programs and support an initiative, the Rising Nations Heritage Project, to be a repository for the cultural heritage of island nations.

Tuvalu Prime Minister Kausea Natano said that Pacific Island nations had done very little to contribute to global warming — he said less than 0.03% of the world’s total emissions — but yet could be destroyed by the consequences of a warming planet and rising seas.

“We need a global settlement that guarantees nation states such as Tuvalu a permanent existence beyond the inhabitable lifetime of our atoll homes,” he said.

Vanuatu has been pushing for a non-binding advisory opinion from the Netherlands-based court to clarify how existing international laws can be applied to strengthen action on climate change and protect people and the environment. The advisory opinion, if successful, would address obligations of states under international law to protect the rights of present and future generations against the adverse effects of climate change.

Earlier this year, the Pacific Islands Forum, the regional body of 18 Pacific island member countries and territories, took matters into their own hands, declaring that their maritime boundaries, which are determined by the size of their land masses under the U.N. Convention on Law of the Sea, will be fixed irrespective of changes to the size or shape of the islands in the future. This approach is contentious under international law due to competing interests between nations over the high seas.

In a report by a study group in August 2022, established under the International Law Commission to address sea-level rise in international law, alternatives were proposed to protect the statehood of nations that may lose their territories. Proposals included assuming a presumption of continuity of statehood and maintaining some form of international legal personality without a territory, similar to the Holy See and the Sovereign Order of Malta.

“We all are very much aware that our very existence is dependent on our fortitude, our tenacity, our resilience and only through genuine partnership” can results be achieved, said Sefanaia Nawadra, director general of the Secretariat of the Pacific Regional Environment Program, during this week's meetings in Samoa.