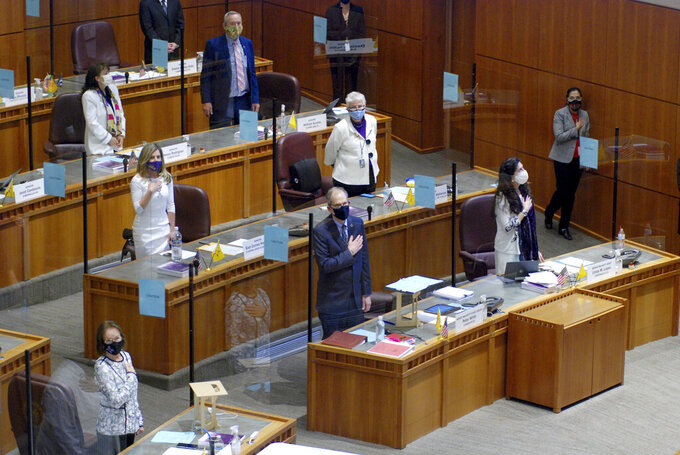 Morgan Lee, ASSOCIATED PRESS
New Mexico state senators including newly elected Siah Correa Hemphill, D-Silver City, center-left, and the Senate's new president pro-tem, Mimi Stewart, D-Albquerque, bottom left, stand at the opening of a 60-day legislative session on Tuesday, Jan. 19, 2021, in Santa Fe, N.M. Fences, roadblocks, police and troops encircled the building as a precaution against federal warnings about the potential for violence. Plexiglass partitions have been installed on the floor of the House and Senate to protect legislators from coronavirus infection, and the Capitol is closed to the public to blunt the contagion. (AP Photo/Morgan Lee)

SANTA FE, N.M. (AP) — New Mexico could become the first state to offer public campaign financing to candidates seeking to serve as judges in general jurisdiction courts that handle the bulk of criminal and civil-law trials, under a bill aimed at reducing reliance on private campaign donations in the judiciary.

The bill from Democratic Senate Majority Leader Peter Wirth, of Santa Fe, and Sen. Katy Duhigg, of Albuquerque, advanced toward a likely Senate floor vote this week, after the endorsement Friday of a legislative budget committee.

New Mexico currently offers public financing to candidates in statewide elections to the Supreme Court and Court of Appeals.

The initiative would extend the option of public financing to candidates for nearly 100 judicial seats in state district courts that handle criminal trials on charges ranging from murder to burglary, as well as a broad gamut of civil litigation related to personal injury, contract disputes, divorces and more.

New Mexico's district judges are initially elected in partisan elections to six-year terms, and then subject to nonpartisan retention elections. They also may be appointed initially through a nominating commission.

Alicia Bannon, managing director for the democracy program at the Brennan Center for Justice, says no other states currently provide public financing for lower-court races, while a bill in the Maryland Legislature would extend public financing to state circuit and orphans’ court races.

“One advantage of public financing is that it can open the door to a more diverse set of judicial candidates,” Bannon said. “In addition, it avoids putting judges in the awkward position of having to fundraise, which can raise conflicts of interest.”

“Judges find themselves compelled to raise private funds for their election campaigns without learning the name of contributors who submit checks to the campaign treasurers,” she said. "This consistently puts them in an awkward position of holding fundraisers with a room full of potential donors, but also they are expected to turn a blind eye where the check is written and hand it to their campaign treasurer.”

“Several judges have indicated to us how problematic the process is,” Tellez said.

Wirth said the initiative will rely on money from the state's public election fund that previously went toward campaigns for the state utilities commission. Reforms approved by a statewide vote in 2020 transform the elected commission to a three-member board appointed by the governor.

Three Republican state senators including Republican Minority Leader Gregory Baca of Belen have voted against advancing the bill in committee hearings. They could not immediately be reached for comment.

The level of public financing for district-court candidates would vary, depending on the population of the judicial district, and judges would need to qualify for public campaign support by gathering as many as 400 small campaign contributions of $5 as a gesture of interest and confidence among voters.