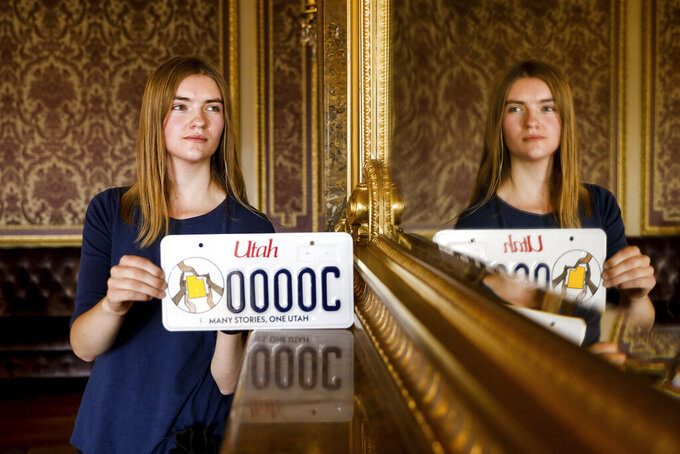 SALT LAKE CITY (AP) — If you find yourself stuck in traffic and staring at the license plate attached to the vehicle ahead of you in the future, Gov. Spencer Cox said he hopes you’re staring directly at Utah’s newest plate option.

The plate features an outline of Utah and five hands of different colors holding it into place. The words “many stories, one Utah” are printed underneath, the Deseret News reported. The governor said he hopes someone will see it and think about what it represents.

“I hope and believe because of the incredible artwork that it will inspire conversations,” Cox said.

The new license plate unveiled at the state Capitol on Thursday honors the life and work of Martin Luther King Jr. While there are no direct links to his image or likeness — as a result of legal reasons from the King estate — the design itself is inspired by him and his work as a civil rights activist before he was assassinated in 1968.

Utah’s work toward an MLK-themed license plate dates back to 2012, according to Simba Maponga, chairman of the state’s Martin Luther King Jr. Human Rights Commission. A 2020 bill led by Rep. Sandra Hollins, D-Salt Lake City, and Sen. Luz Escamilla, D-Salt Lake City, then paved the way for a license plate to recognize King’s work and life with money from the plates going toward scholarships for “underrepresented or underserved” students.

The group began accepting designs for the new plate after the bill passed last year.

“The commission pursued an art contest that invited our youth to contribute to this experience by submitting artwork that espoused Dr. King’s principles of nonviolence, his hope for unity and his lasting legacy that inspires us to believe that there’s enough room for us all,” Maponga said.

The winning design was submitted by Eleanor Smith, a former Timpview High School and current BYU student. She said in a statement that it was inspired by King’s dream for a world that celebrates and values differences, and symbolizes “the many unique voices of Utah coming together in love and unity.”

That’s exactly what Cox hopes you see as you stare at the license plate.

“This is a symbol. It’s a moment of time for all of us to reflect on how far we’ve come and then look to the future on how far we still have to go,” the governor said.

Hollins feels the same way. It’s been over 50 years since King’s death but his vision is still something people long for as divisions among people continue today, she said.

For her, the license plate is a reminder that there is more that connects people.

“Seeing something like this and being brought together is something that is much needed in this time that we’re living in right now,” she said.

The new plate is now available for $21 through the Utah Division of Motor Vehicles.