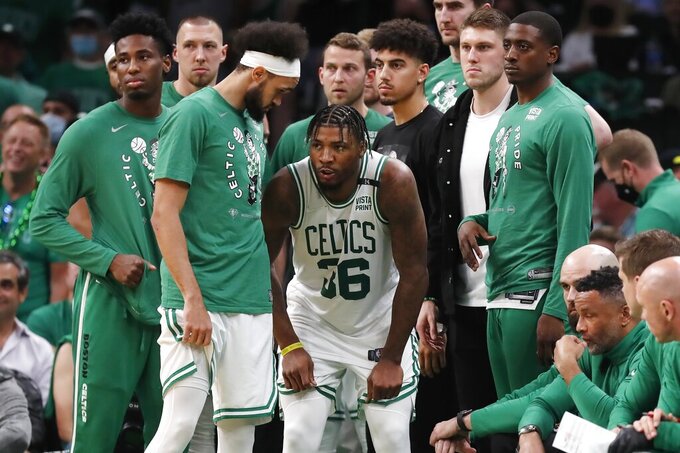 Michael Dwyer, ASSOCIATED PRESS
Boston Celtics' Marcus Smart come back on the court after leaving temporarily with an injury during the second half of Game 3 of the team's NBA basketball playoffs Eastern Conference finals against the Miami Heat, Saturday, May 21, 2022, in Boston. (AP Photo/Michael Dwyer)

MIAMI (AP) — Tyler Herro's strained left groin forced the Miami Heat to rule him out of Game 5 of the Eastern Conference finals against the Boston Celtics on Wednesday night.

It was the second consecutive game that Herro — the NBA's sixth man of the year this season — has needed to miss because of the injury.

Herro has averaged 13.5 points in the playoffs on 41% shooting, down considerably from his regular-season numbers of 20.7 points on nearly 45% shooting.

The Celtics got defensive player of the year Marcus Smart back for Game 5. Smart missed Game 4 because of a sprained right ankle.

The Heat and Celtics were tied 2-2 entering the game Wednesday.