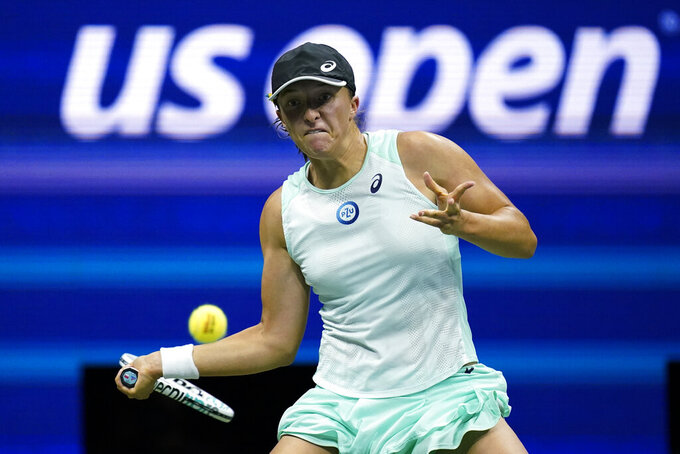 Julia Nikhinson, ASSOCIATED PRESS
Iga Swiatek, of Poland, returns a shot against Jessica Pegula, of the United States, during her win in the quarterfinals of the U.S. Open tennis championships, Wednesday, Sept. 7, 2022, in New York. (AP Photo/Julia Nikhinson)

Iga Swiatek faces Aryna Sabalenka in one U.S. Open women's semifinal, while Ons Jabeur and Caroline Garcia meet in the other. The top-ranked Swiatek, who won her second French Open title this year, is the only major champion among the four players. She is also the first No. 1 seed to reach the U.S. Open semifinals since Serena Williams in 2016. Sabalenka is the only player who has previously reached the last four in Flushing Meadows. The No. 6 seed lost last year to eventual runner-up Leylah Fernandez. Jabeur, the No. 5 seed from Tunisia, reached her first Grand Slam final this summer at Wimbledon. Garcia is in her first major semifinal and playing as well as anyone. The No. 17 seed from France stretched her winning streak to 13 matches by beating Coco Gauff in the quarterfinals. She has not dropped a set in the tournament.

2:50 a.m. — Finishing time of Carlos Alcaraz's victory over Jannik Sinner, the latest ever at the U.S. Open. Three matches had finished at 2:26.

“You know, everyone loves a Cinderella story. Just trying to make one.” — No. 22 seed Frances Tiafoe, after becoming the first American man to reach the U.S. Open semifinals since Andy Roddick in 2006.